DC character Tim Drake, who has been a former Robin and Red Robin, no longer has to worry about living in the Dark Knight’s shadow. He has now taken on a new identity in the DC world as the Savior. This means we now have two Tim Drakes in the DC world, a younger version from Teen Titans and an older version who becomes the Dark Knight. Tim Drake never wanted to be the Dark Knight and his brutality over time is a direct result of the events that transpired as he became older.

If you are reading Detective Comics, you will be taken on the tragic journey of Tim Drake and the mission he takes to save the universe including his new identity as Savior. As difficult as the mission may be, the Savior will go down a sickening path knowing the stakes are high considering how many lives are at stake. With all that, fans will be interested in the suit that Tim wears.

Since Tim Drake’s death in Detective Comics, fans (including myself) wanted him back in some form and we soon found out in the story that he was kidnapped instead and it came from the assistance of a different kind of Batman. That Batman was in fact a future version of Tim Drake as the Dark Knight. So we had Robin, Batman (Older Tim Drake from the future), and Wayne’s Dark Knight. Older Drake sets his sights on killing Batwoman who is at the centre of the path Tim takes to eventually become the Dark Knight, a path that he tries to change when coming back to face his younger self. Fundamentally broken as the older Tim was, he still comes to terms with Wayne’s Dark Knight, which means Superman’s son is now the key to saving his own future.

The focus is to kill him including anyone else who gets in his way. So therefore, Tim finds himself in need of a more fitting, more singular, and more meaningful name that is aligned to the events at hand.

Click on the images below for a larger view 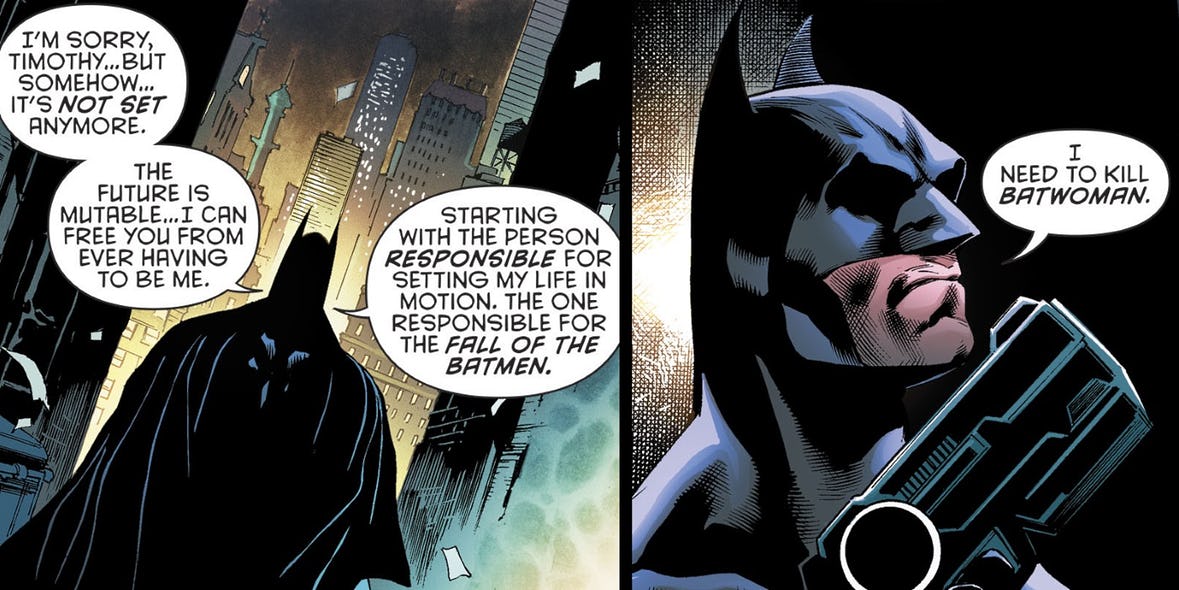 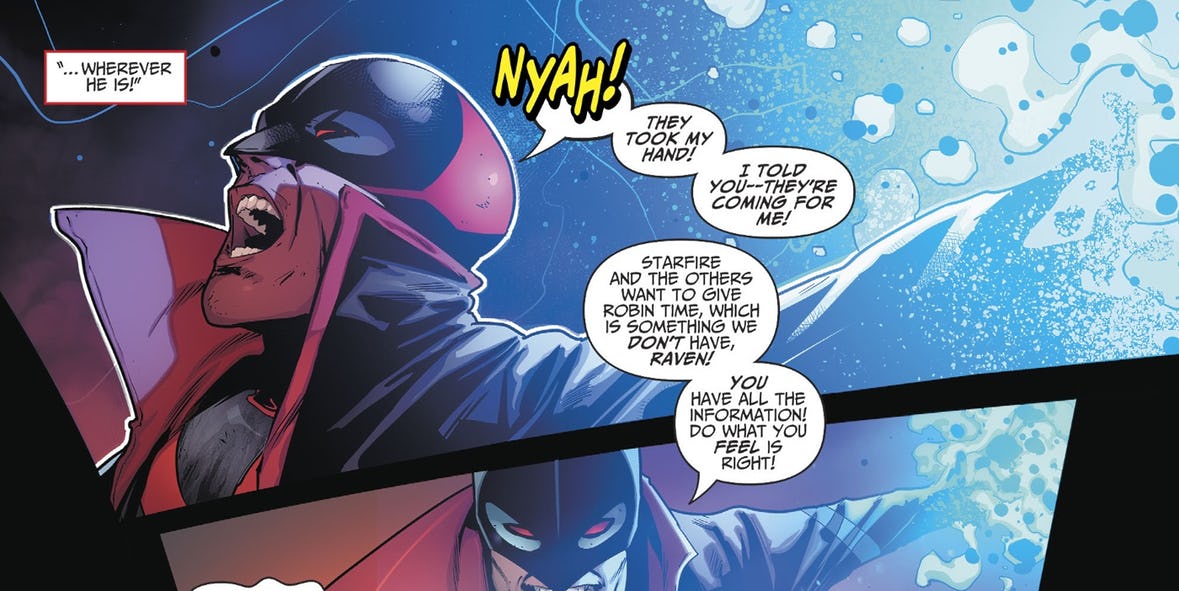 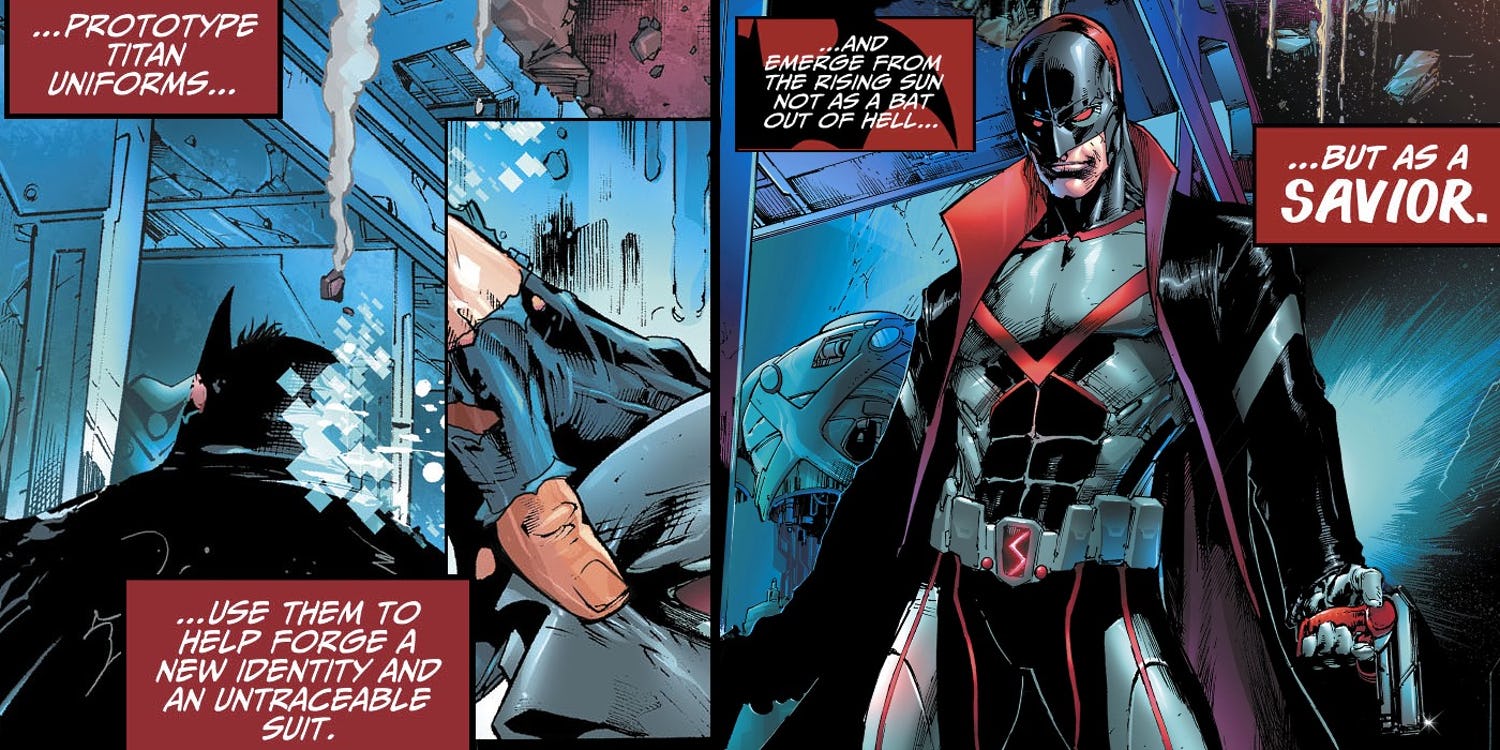 Tim tries to kill Jonathan Kent (and Damian Wayne, Jonathan’s closest protector), the Bat family enter into a war with him to prevent those events from taking place and as a result, Tim places himself in the damaged Titans Tower. Tim has some functional components to his damaged suit, and knowing he needs a new combat uniform he searches through prototypes in the Titans Tower and creates his Savior image.

A modified Batsuit with a trenchcoat, the colour of red and you have a new character in Savior. Is he good or bad? Tim makes his point of not wanting to be the Batman, but in fact, the leader he always wanted to be. Nothing from the shadows like his teacher but a leader out in front in the light.

Tim Drake convinces some of the Teen Titans to take his path, he is the same person they have come to know over the years and with a mission that carries some merit, some of them take sides with him. He claims that Superboy is going to destroy the future has coincided with Jonathan Kent’s strange solar flare powers emerging and these are powers that can’t be controlled so they naturally become a threat. Tim is on limited time as well, but he has the help of future Superman and Wonder Woman, they are both formally known as Cassie Sandsmark and Conner Kent – the Titans of Tomorrow.

Tim is up against it as he has former team members and future friends trying to all stop him, but that doesn’t deter him from his mission at all. The story heats up with Teen Titans #15 ending by sending all parties to go look for Jonathan and Damian, the clock is running out not just for Tim, but for everyone who is now involved. – Exciting, isn’t it!

A complicated story yes, but one worth reading.

In the next issue, which is out January 3, you will see the conclusion to the time moving story which will be in Superman #38.