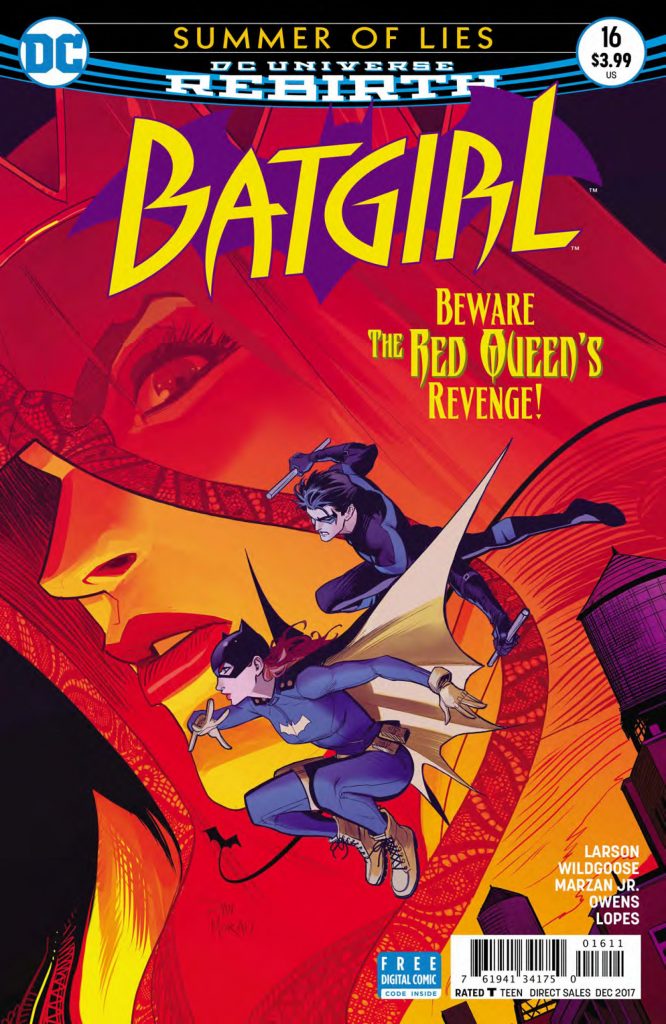 Batgirl #16 picks up immediately where the last issue left off. In the past, Batgirl and Robin are investigating Purotech after an attack on Barbara’s friend, Ainsley. In the present, they are following up leads to predict where the Red Queen is going to attack next. This leads them to a drug rehab center Ainsley had attended.

After a month of Dark Nights: Metal heavy reading for me, it’s nice to jump into a book that is lighter in tone and not tied-in to the event. I love that this issue gives an even focus on the past as much as it does the present. The first half of the story takes place in the past as Batgirl and Robin follow Ainsley to what ends up being her AA meeting. 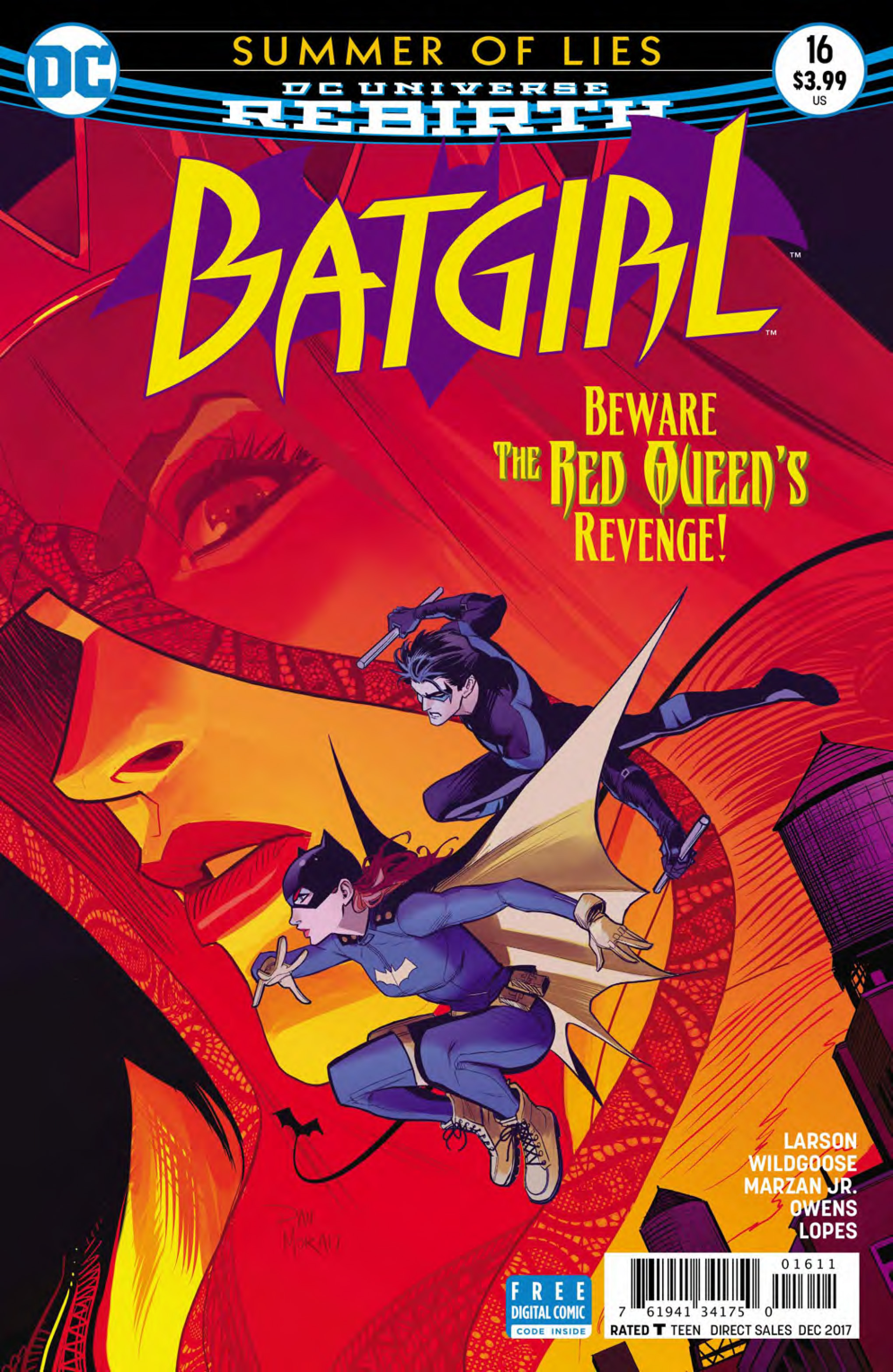 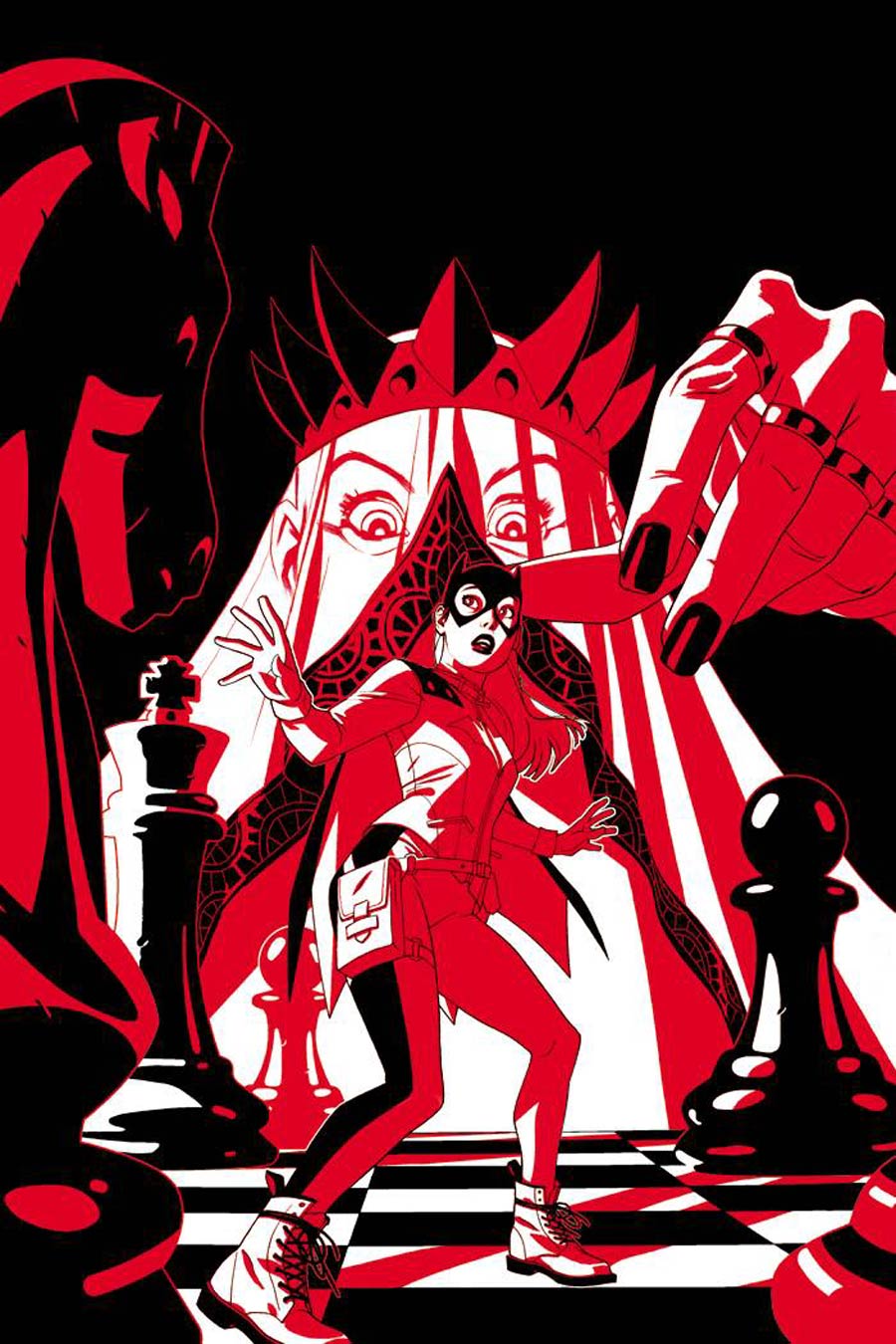 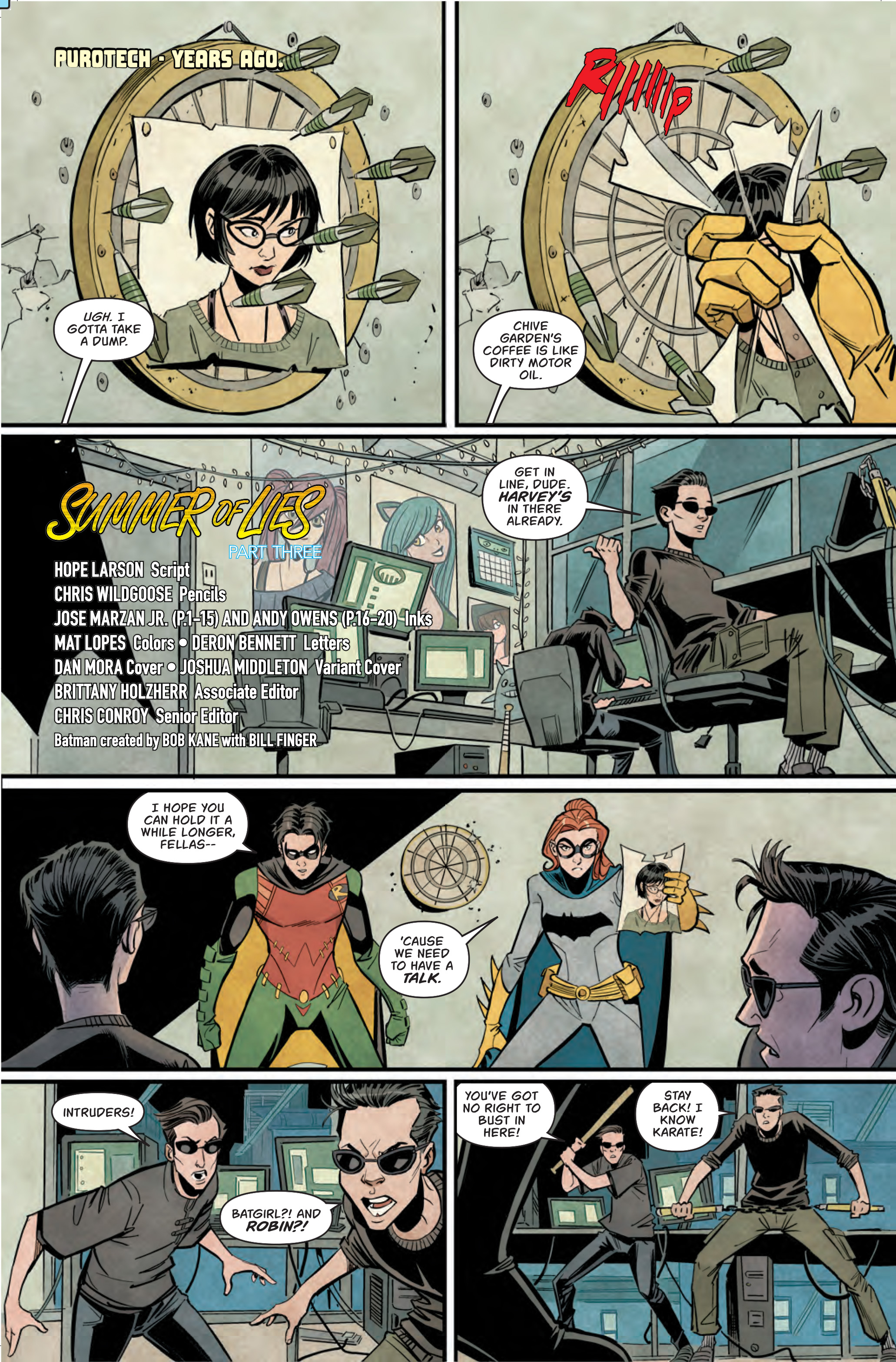 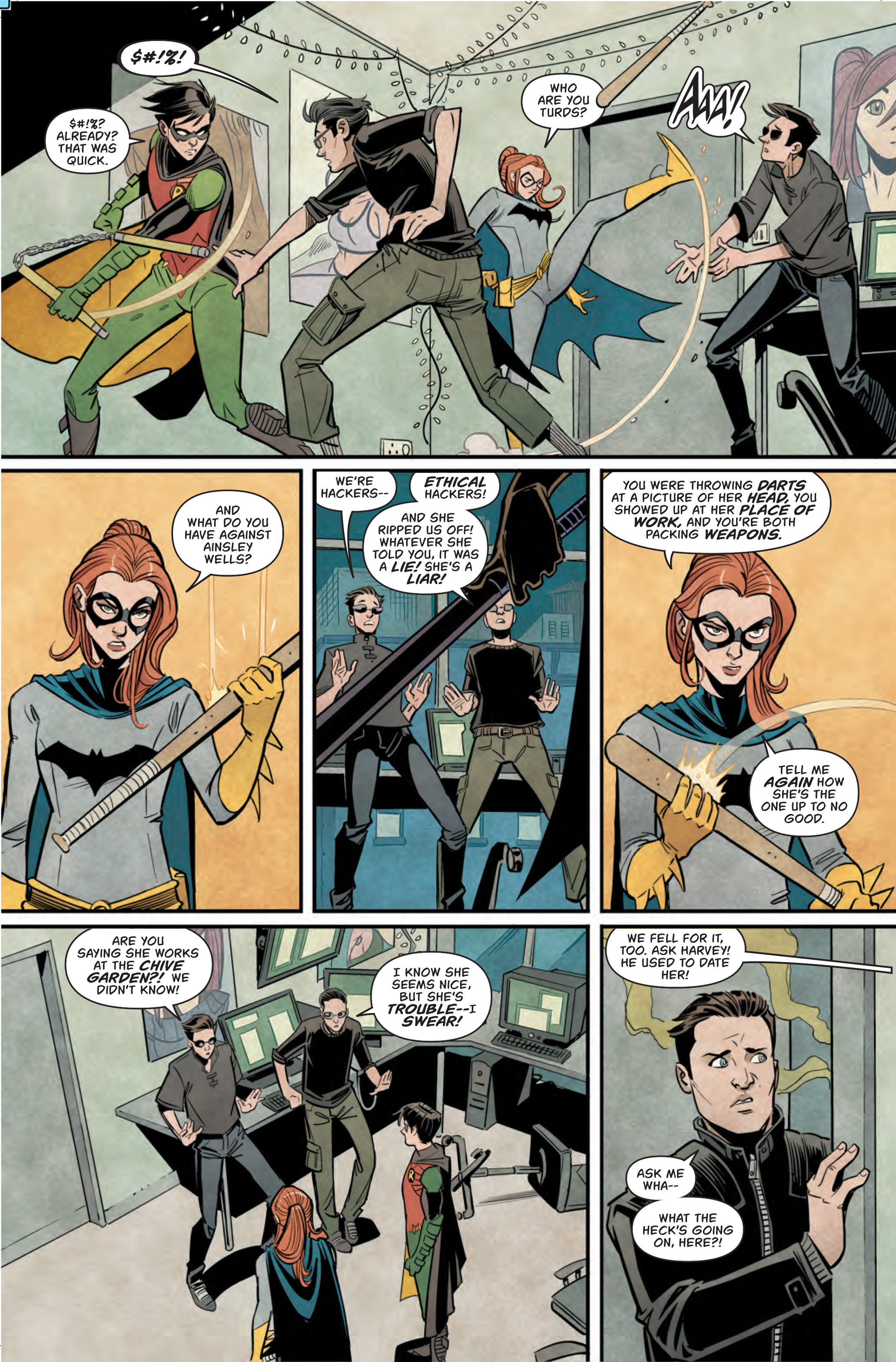 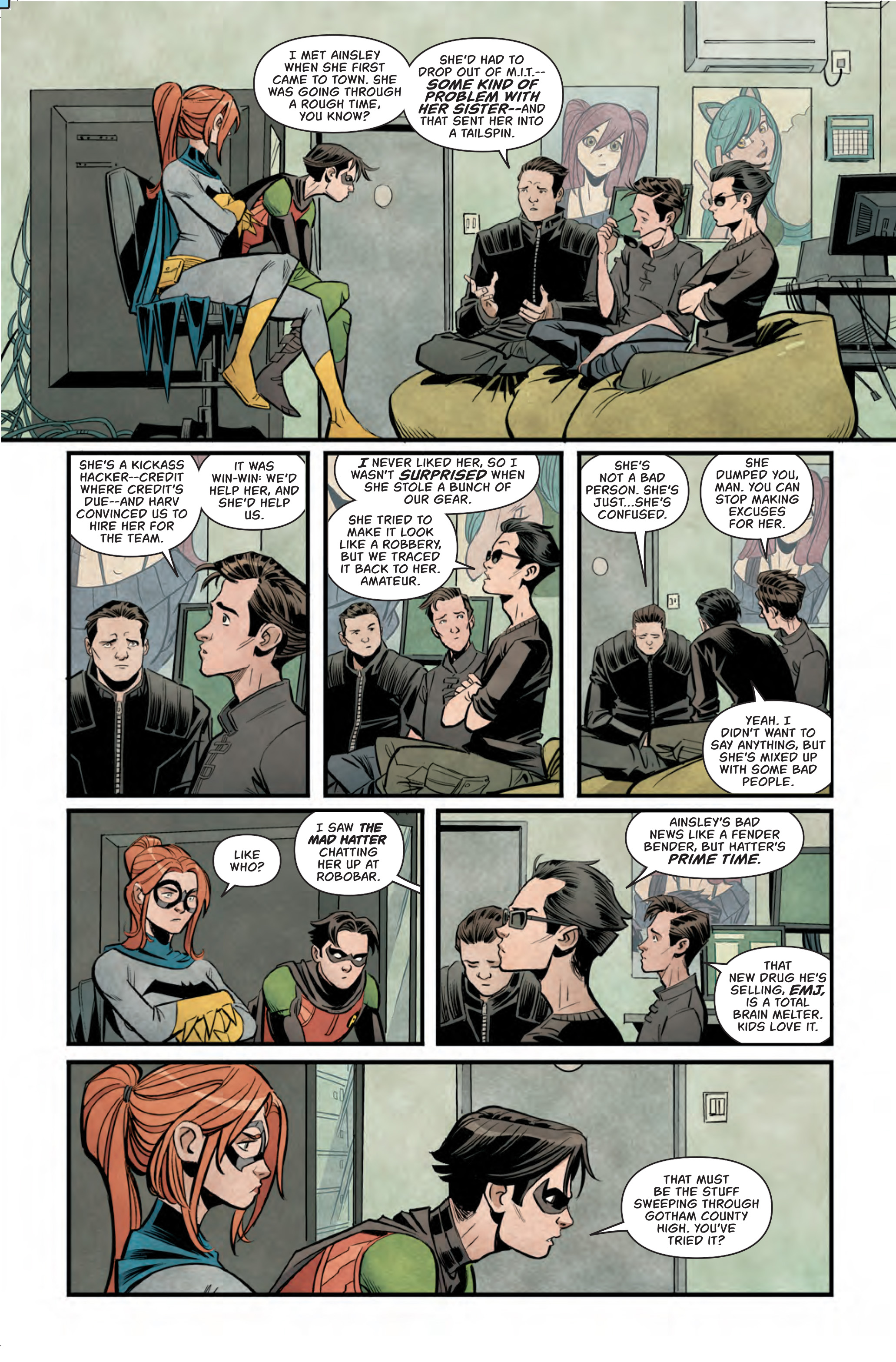 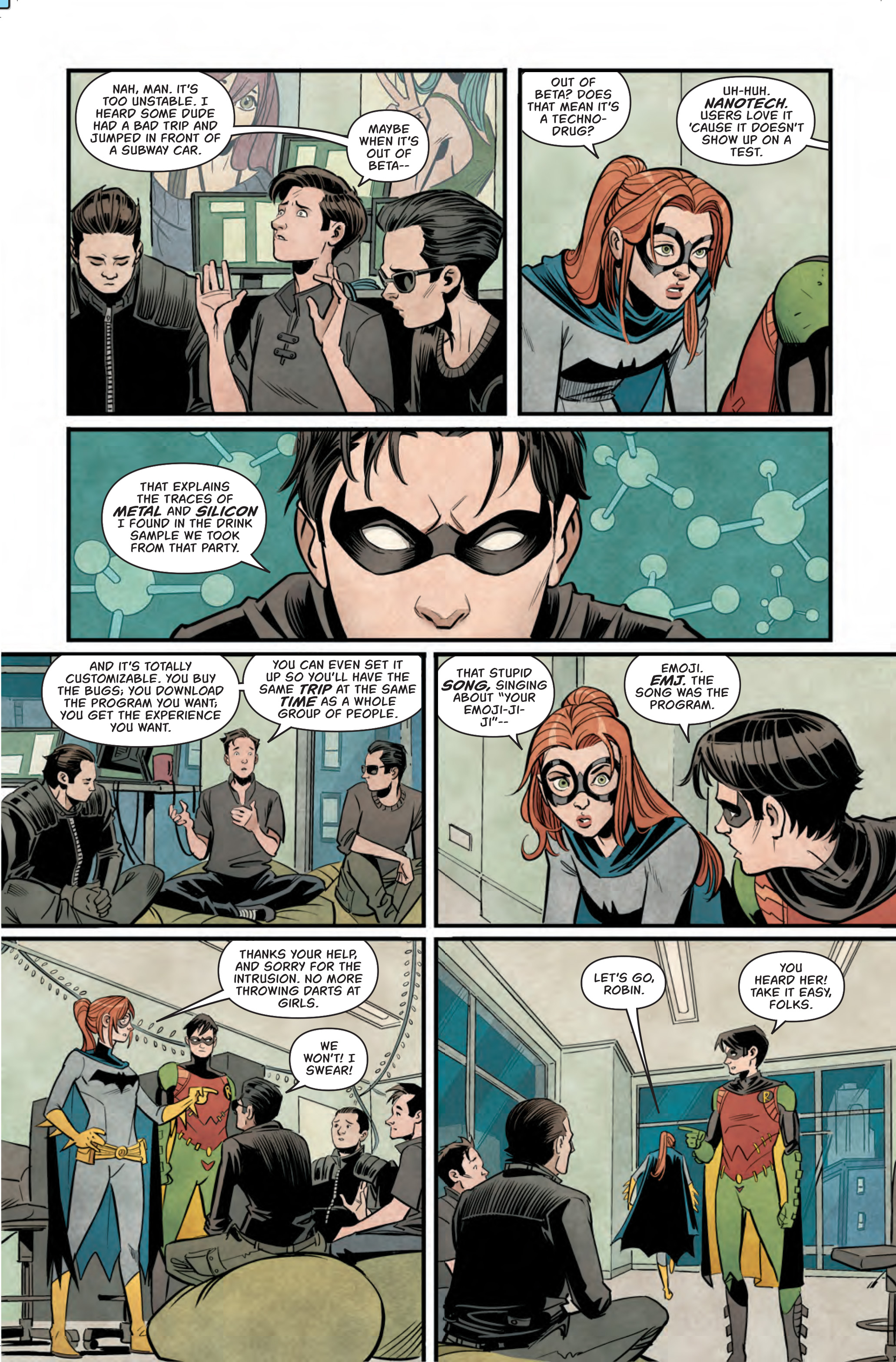 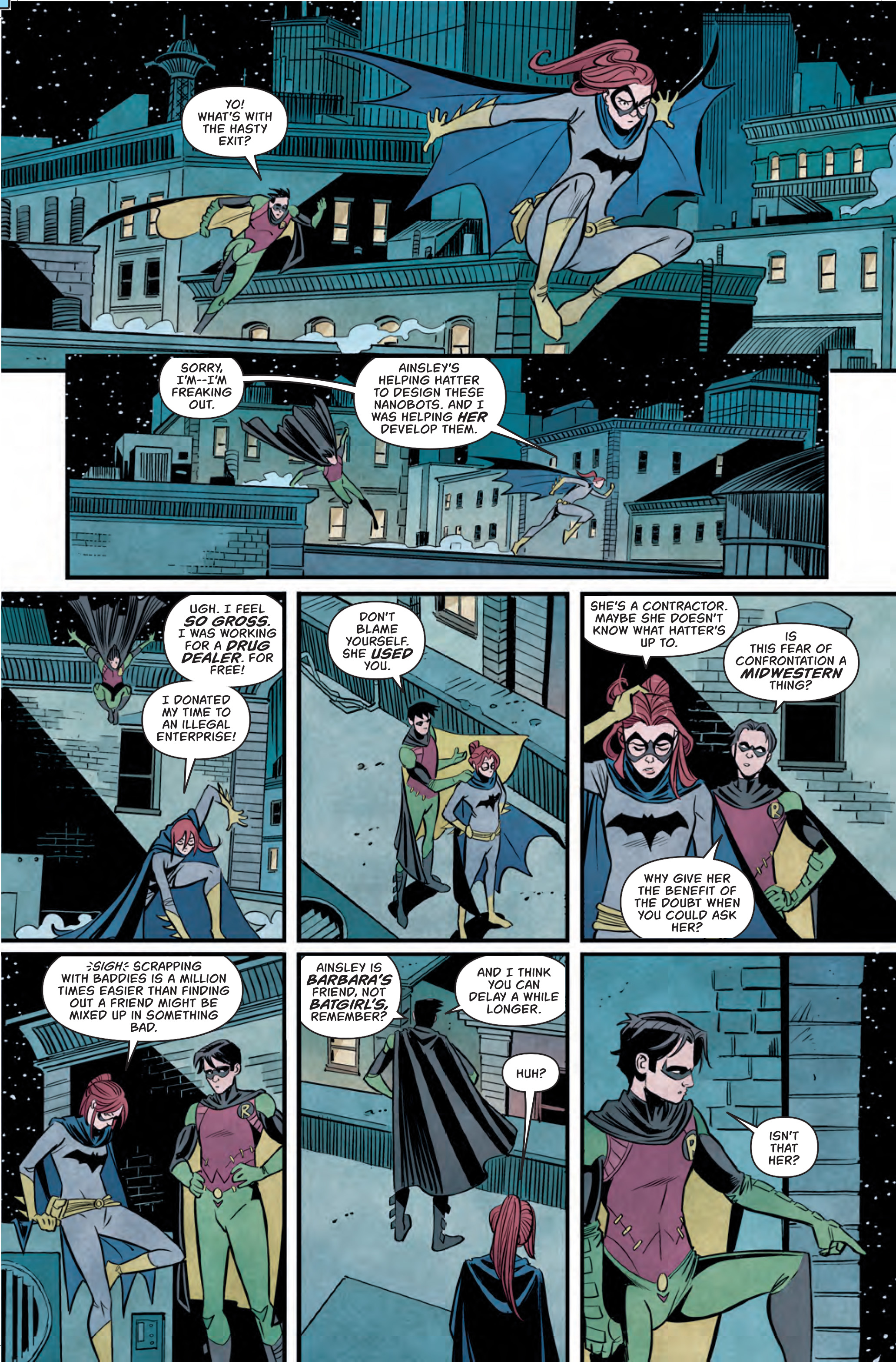 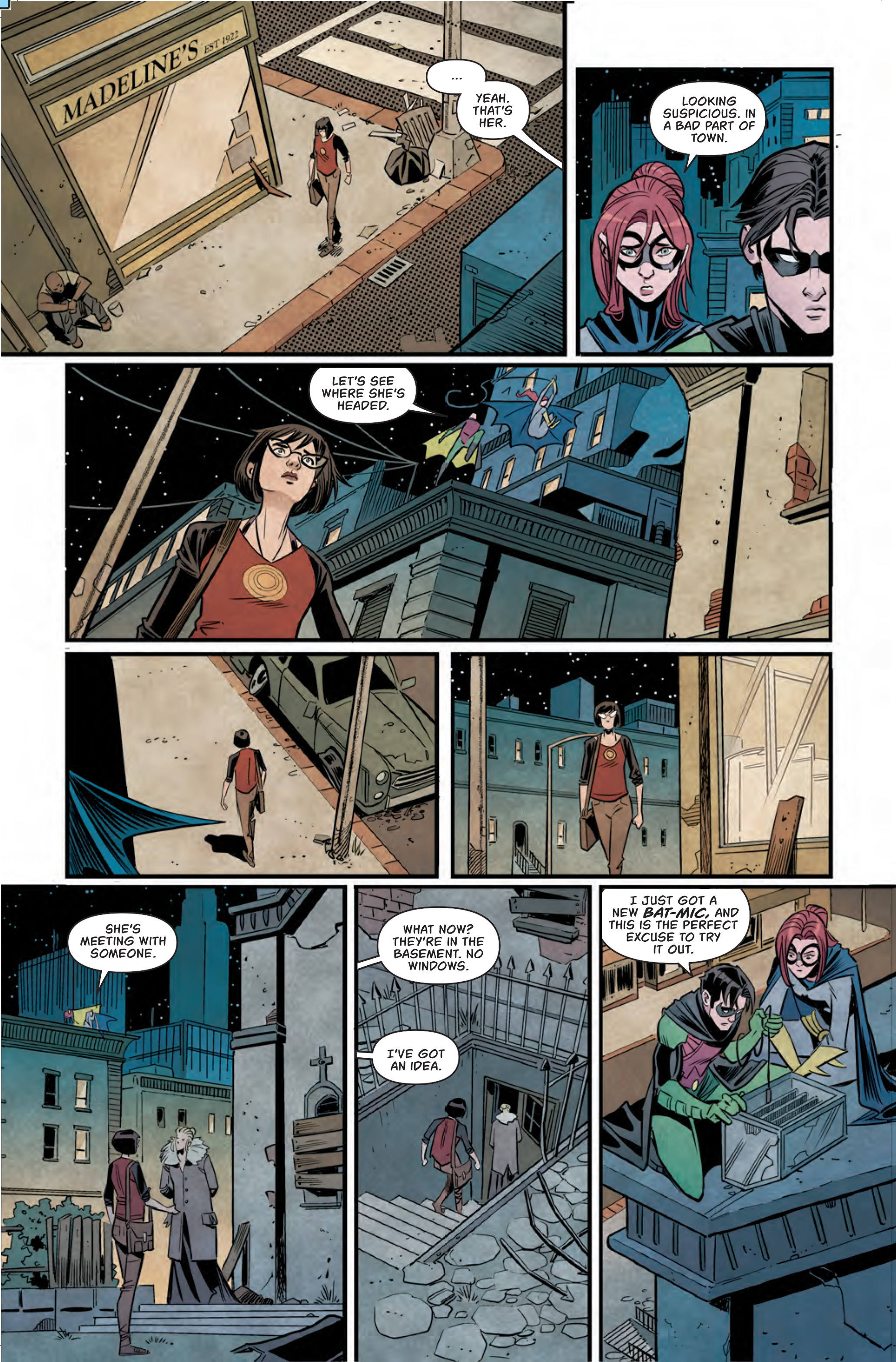 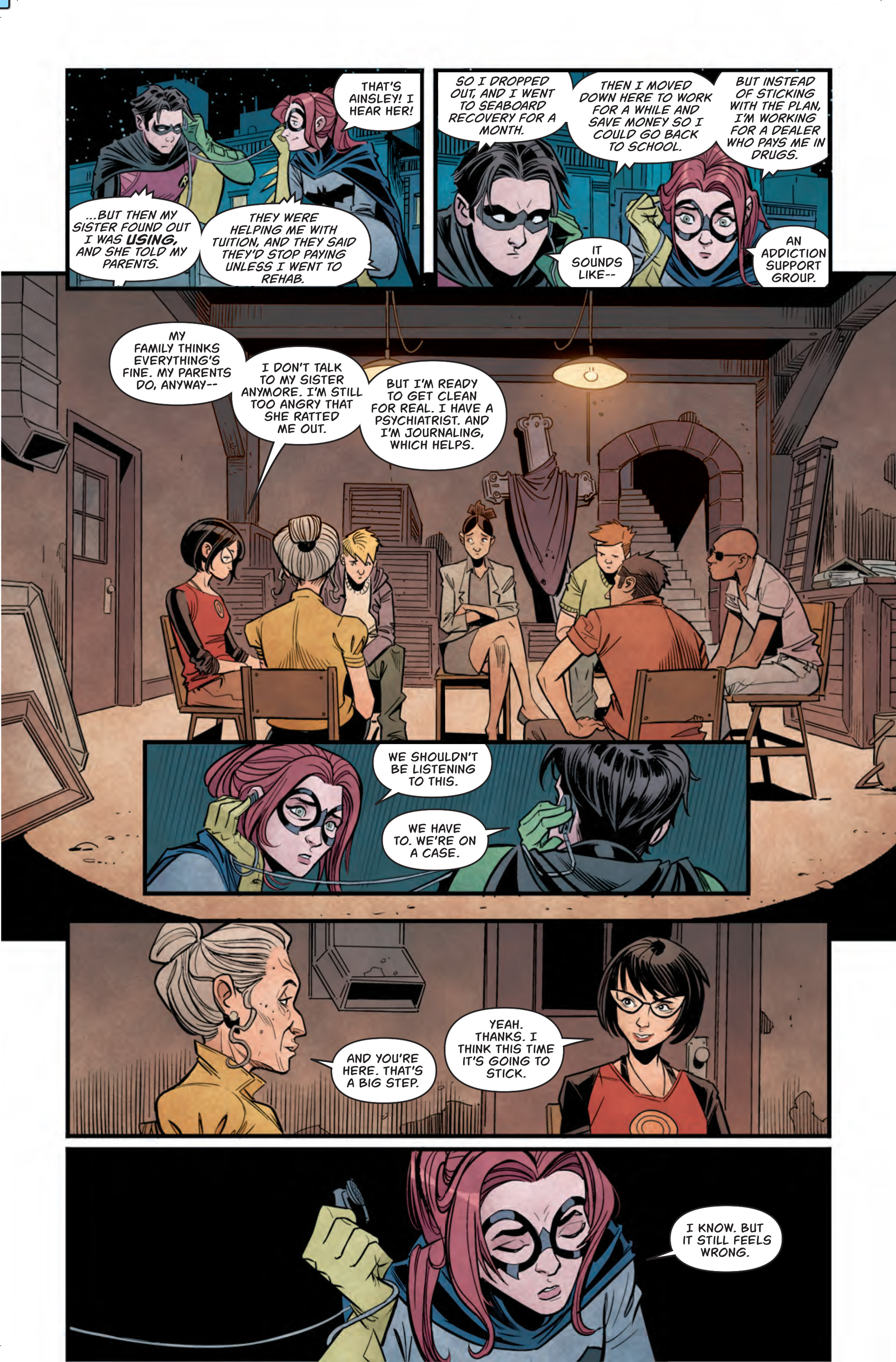 Batgirl, who is in her early days, feels bad about eavesdropping, Robin reassures her that it’s part of their investigation. A nice little nod to their differences—Robin is clearly trained by Batman, while Batgirl has yet to separate that persona from Barbara. The scene ends in a nice callback to last month’s issue, with a young Barbara and Dick kissing; this time neither hold back. 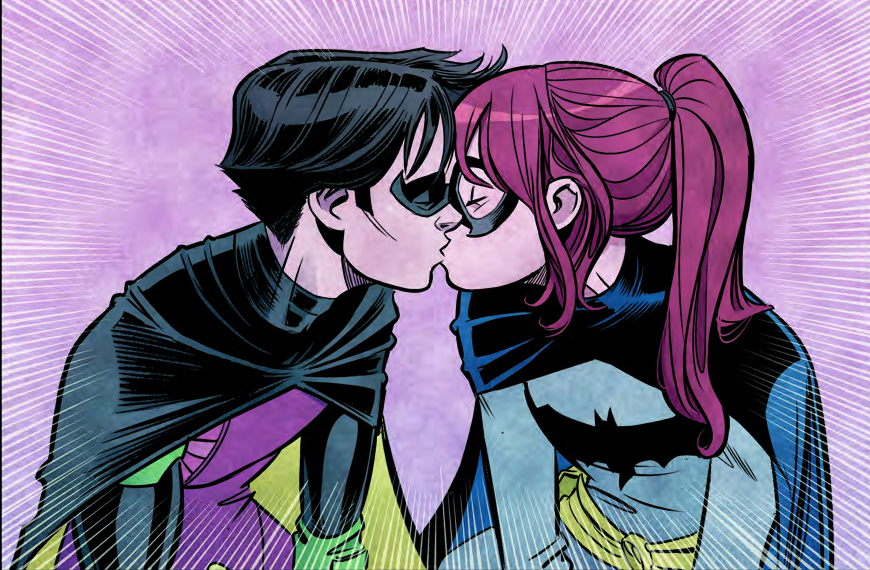 In the present, Barbara is convinced that Ainsley is the Red Queen and figured out that Seaboard Recovery makes the next target. As they are about to enter, a chair is thrown through the window—looks like they were right. These scenes here involve some nice call backs (Batgirl using the Emoji song to calm the nanobot drug dosed staff) and foreshadowing (the blonde girl clearly not paying attention to the music and her face being hidden in the padded room). The moment Batgirl, who is now more experienced, discovers that her friend can’t be the Red Queen because she died from an OD, is heartbreaking. Another sign that she’s not like Batman, or even Nightwing.

Hope Larson delivers yet another tight script. I love that she is spending so much time in the past; for readers who may not know the true history between Barbara and Dick, it’s a fantastic opportunity to catch up. Seeing their dynamics parallel between the past and present is interesting. Larson’s ability to callback and foreshadow events helps make this series standout.

Christian Wildgoose’s art continues to impress me on this series. His subtleness on foreshadowing the blonde staff member was actually the Red Queen had me go back several times to see how I missed. Wildgoose’s art is just as smart as Larson’s writing.

Batgirl #16 continues to deliver. By focusing on the past as much as the present, Larson gives us two stories that are closely tied together. This issue was not only written intelligently, but the art accentuated it. Batgirl continues to be the light in an otherwise dark DC world that is literally dealing with darkness.