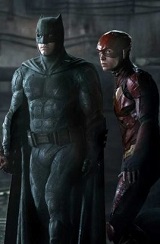 AT&T Have teamed up with YouTube to launch some character pieces highlighting different members of the Justice League. In two new video clips, Batman recruits Flash onto the team, with all new dialogue and action, not seen in previous trailers.

Both pieces really give us a good look into Barry Allen’s character and personality. In many ways he’s the polar opposite of the ultra confident Bruce Wayne. He is a being of incomprehensible power, but he has all of the vulnerability and insecurities we all share.

Batman encourages The Flash in both his guises, leading to some hilarious dialogue and interplay between the two heroes. The strong, but non-superpowered Dark Knight comforting the mega-powerful Flash is both endearing, and thought provoking.

There are some terrific exchanges between the entire cast, and the characters they play in both these videos. They’re well worth watching, and are really helping to build some real excitement for the Justice League movie.

As the film is now only a few weeks away, clips like these may go along way to alleviating many fans’ anxieties. The tone of these videos is very lighthearted and family friendly. While many of us enjoy our comics – and our movies – dark and gritty, these videos show a side of the DC Universe that critics and viewers alike will find enjoyable. It’s great to watch as Batman recruits Flash into the League, and how Barry reacts to becoming part of the team.