The 4th Batman Day happened yesterday, Batfans! For those who don’t know, it’s DC’s celebration for one of their flagship characters, the Dark Knight. Libraries and comic book stores across the US participated with several free issues of Batman Day one-shots and several hosting signings from the greatest comic book creators around.

So not only did the fans celebrate the – what should be nationally recognized – holiday, but so did several members of the DC Extended Universe.

Batfleck himself shared a photo from Batman v Superman: Dawn of Justice via Instagram:

Speaking of BvS, the director of the first live-action trinity on the big screen, Zack Snyder also posted via Vero to give a shout out to Batfleck. And it’s a big one: 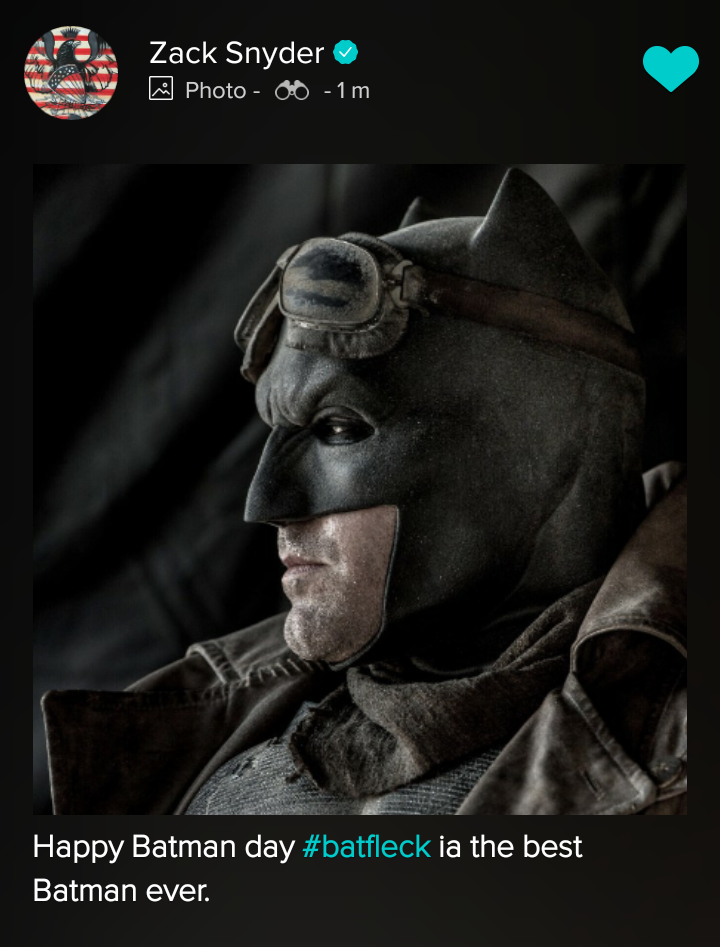 The unfortunate typo is in fact part of the post. That’s a very large claim to make, based very much on his bias. Personally, I do think Batfleck is the best live-action Batman, with Kevin Conroy reigning over all of them.

Batfleck’s co-star, the Man of Steel, Henry Cavil also provided a tribute to the Bats via a very tongue-in-cheek post on Instagram:

Using the lighting and a specific angle, Cavill takes a photo of his dog, making him resemble the cowl of Bats. I like dogs and I like Batman, so I approve.

A couple more people from the BvS crew wanted to celebrate the occasion. Remember the warehouse scene where Batfleck bursts in and takes down about 20 guys Arkham-style? Well, while I’m sure Affleck was in the cowl a lot of the time, he’s simply not trained to handle some of the more dangerous aspects of that fight. Most productions with action and fight choreography have stunt teams to handle those things. Affleck’s stuntman Albert Valladares posted to Instagram a shot of himself with another stuntman Richard Cetrone. Technically, these are the real Batmen who can take all the hits and still keep fighting.

After working with Hans Zimmer on BvS, it seemed Junkie XL was set to return to score the Justice League. However, after Zack Snyder stepped down, Joss Whedon was brought on to direct the re-shoots and usher it through post-production. With him, came Danny Elfman, whom he worked with on Avengers: Age of Ultron.

And lastly, from an older DC universe beloved by many fans, actor Joseph Gordon Levitt, who played Robin John Blake in the Dark Knight Rises, shared a photo of his character in the Nolanverse Batcave:

Though it’s been quite some time since his involvement with Batman, it’s pretty cool that he retains some admiration of the character to post anything at all.

Now, who else should we hear from? Why not the comic book creators themselves?!

Scott Snyder, the writer and architect of the New 52 Batman, has decided to pay tribute to the character that he’s been writing for several years in a few tweets.

For letting me live a kid dream and be a part. One of the great honors of my life. Truly. Thank you.

Wanna see some art?! Comic book artists paying tribute to the Bats! What a treat!

Primarily an artist for Marvel, Jorge Fornes has drawn a few issues of Detective Comics and posted his own old school variation of the Dark Knight:

Before starting on today’s inking session, here is a practice of this guy because it is #batmanday pic.twitter.com/aplr14gjhT

An illustrator known for his work on Green Arrow, Otto Schmidt shared this stylishly angular Batman:

Although Mitch Gerads is knee-deep in the newly announced Mister Miracle with Tom King, he popped up for air and decided to pay tribute to Bats:

Even MISTER MIRACLE is in the #BatmanDay spirit!

Everybody loves Batman. This much is obvious. How did you celebrate Batman Day?! Let us know!