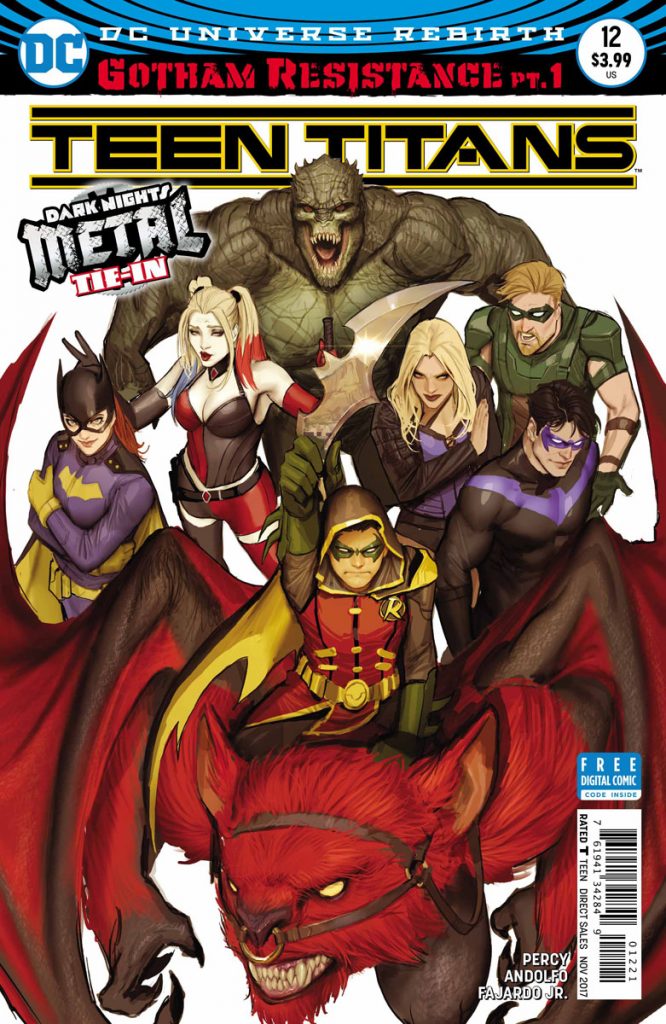 With DC’s Dark Nights: Metal comic event officially in its second month, we begin to see different DC titles tie-in. Teen Titans is the first title to tie-in to the main Metal story. The evil Batmen from the Dark Multiverse have arrived and Benjamin Percy and Mirka Andolfo have the job to fully introduce The Batman Who Laughs.

If you haven’t been following the events that have happened in Metal thus far, then the mountain in the middle of Gotham may seem out of place to you. In Dark Nights: Metal #1, the Justice League investigate dark energy, linked to an investigation Batman has been conducting, coming from the mountain. Damian briefly helped distract the League, along with the rest of the Bat-family, in Dark Nights: Metal #2, which led to his father heading to what he thought was the tomb of Prince Khufu. As it turns out, Batman was tricked and ended up at the tomb of Hath Set, where he disappeared.

The Batman Who Laughs finds, or in the case of The Riddler, breaks other villains out of jail and presents them with a metal card that allows them to reshape reality to how they choose to see it. Gotham, with the dark mountain in the middle of it, is surrounded by rings; with each section controlled by one of the rogues in Batman’s gallery: the Riddler, Mr. Freeze, Firefly, Mad Hatter, Bane, and Poison Ivy. The nightmare that infuses the Joker with Batman wants these villains to reshape Gotham how they see fit, evoking the Riddler himself by challenging them to make it an impossible riddle. Why? So he can laugh. 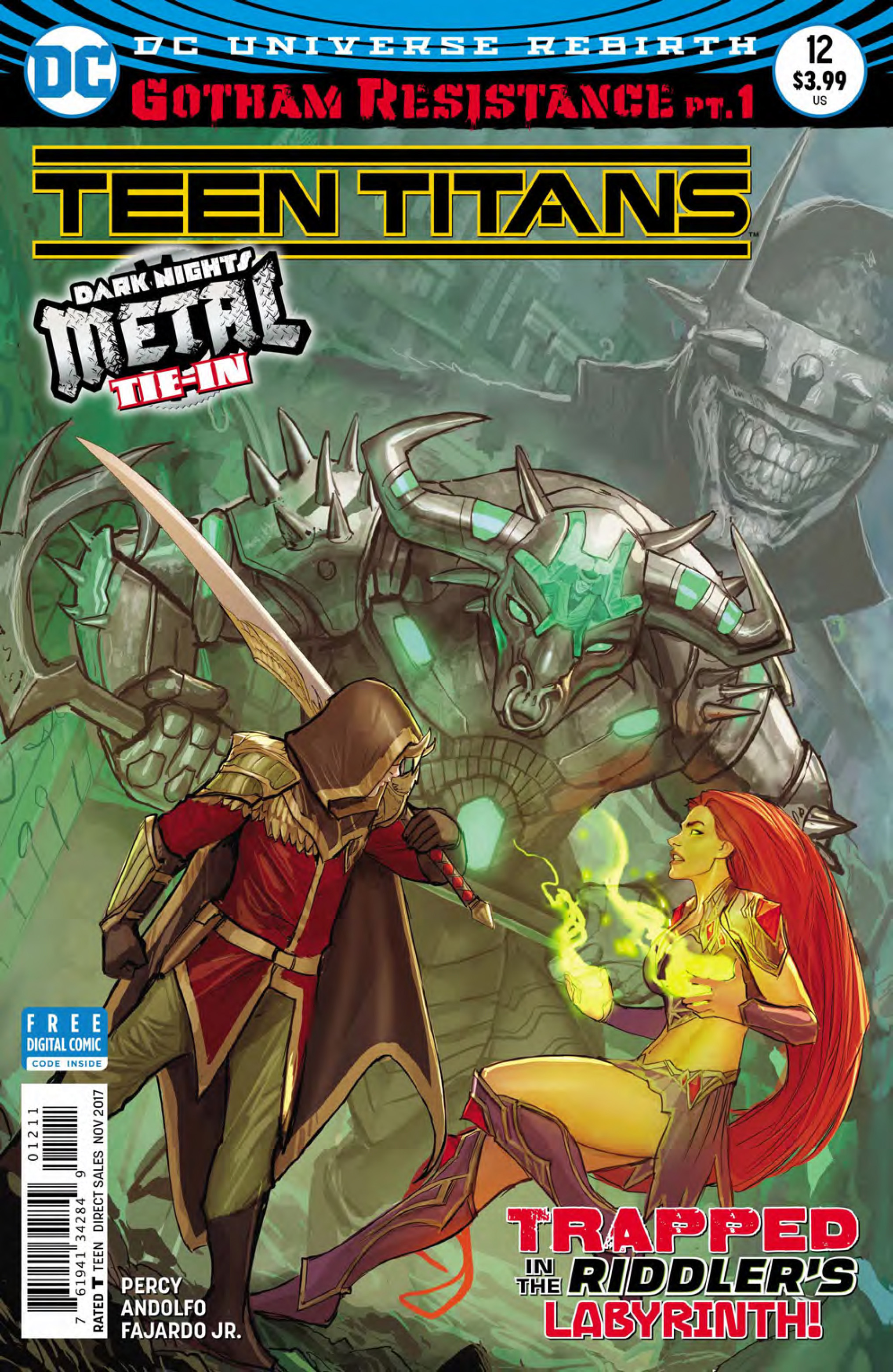 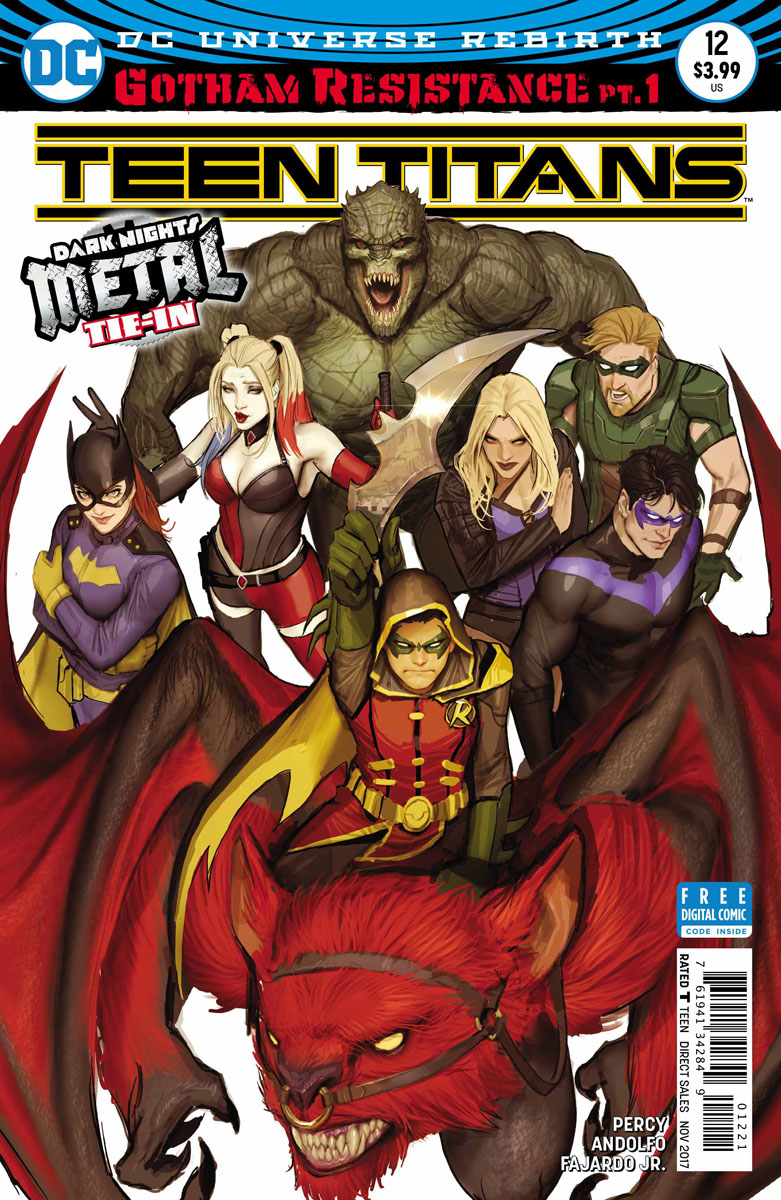 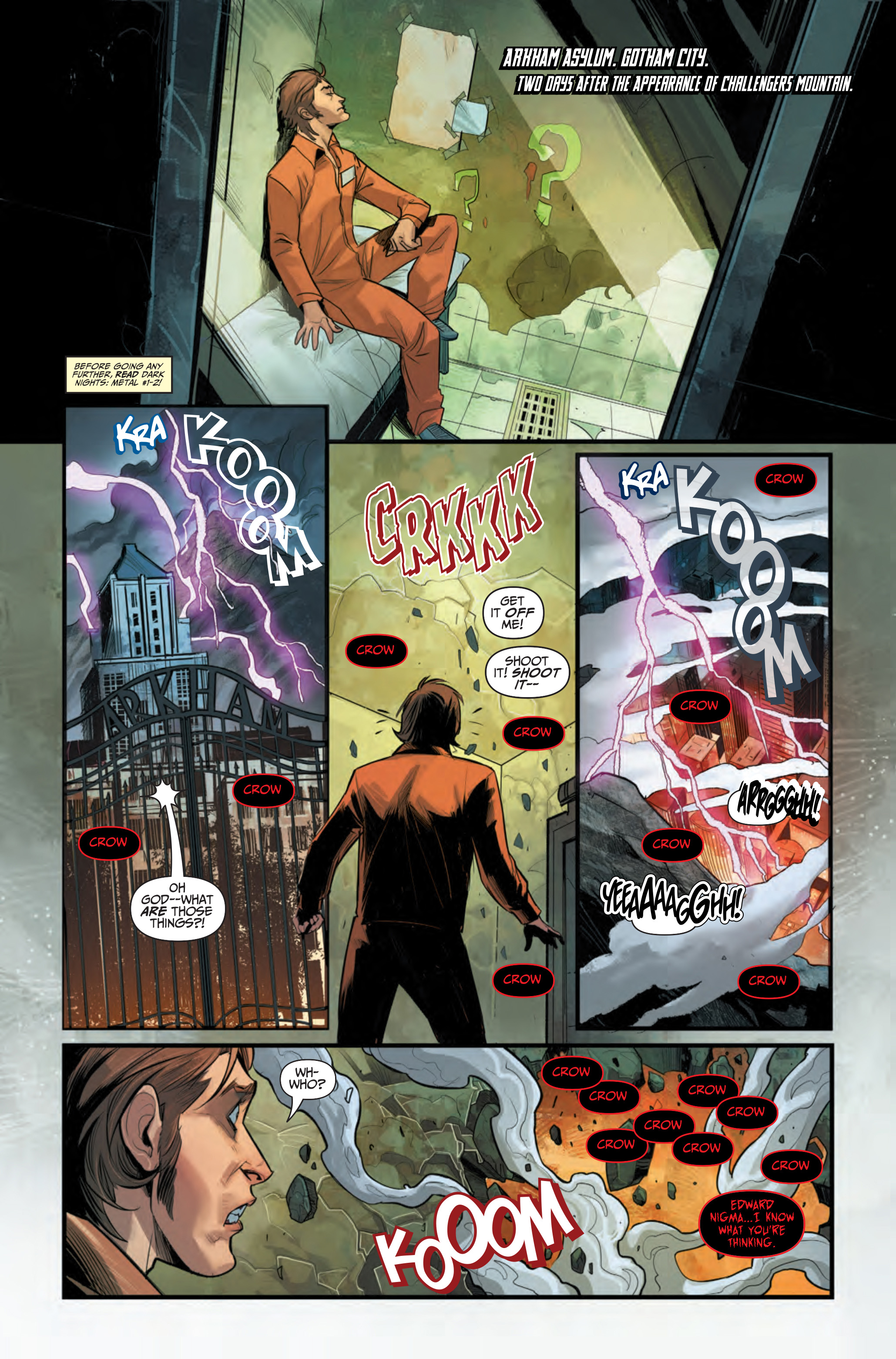 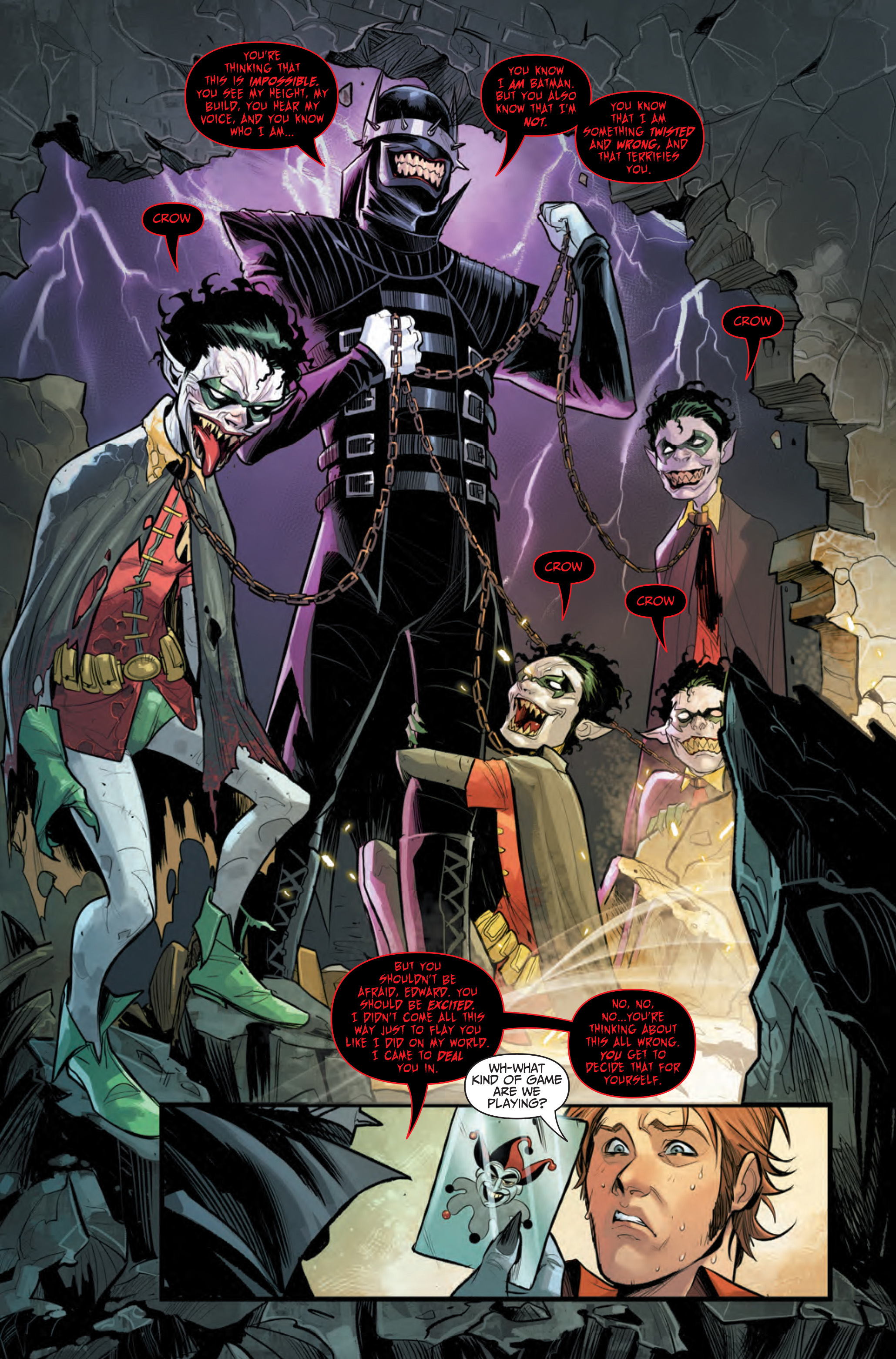 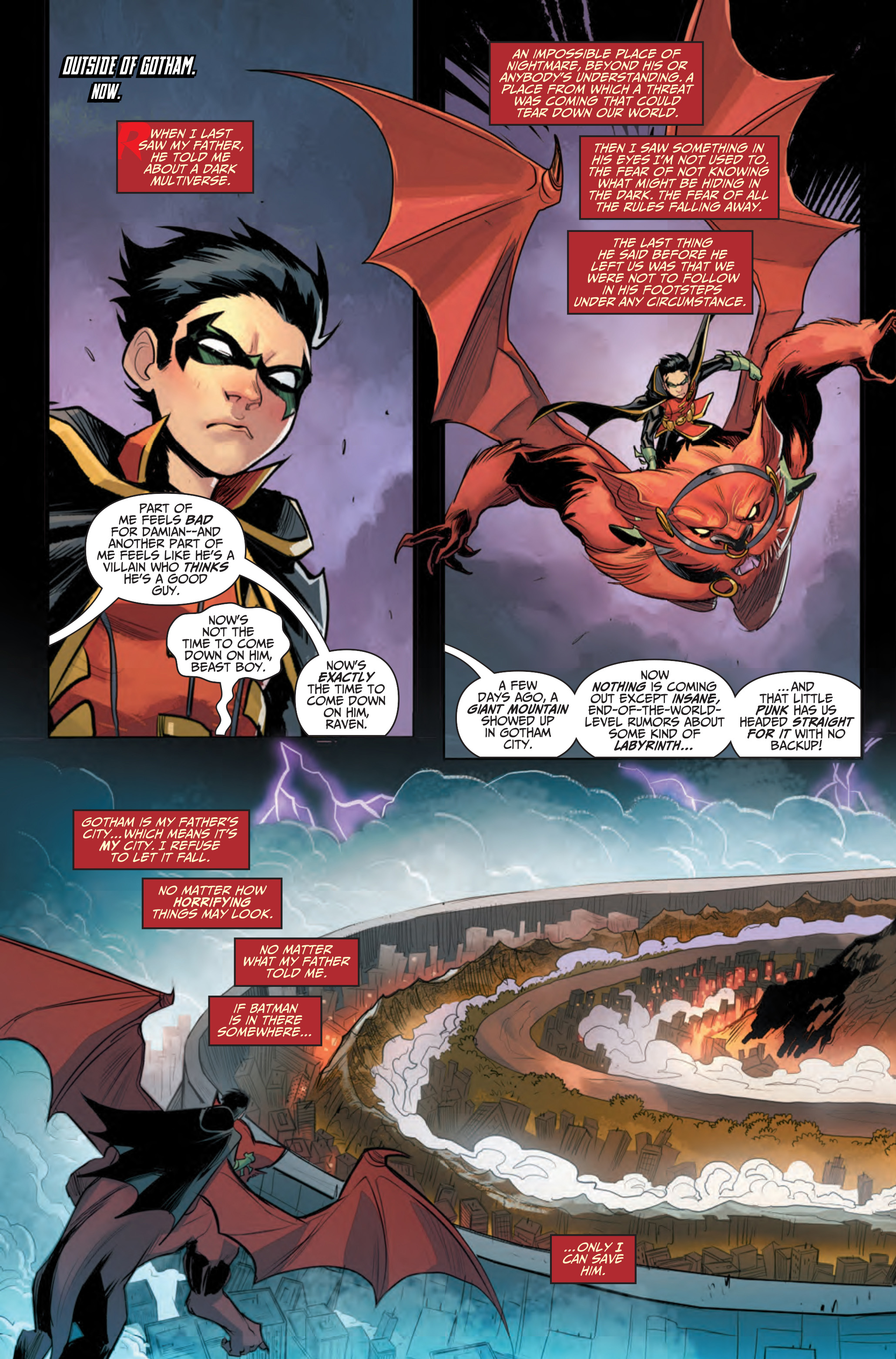 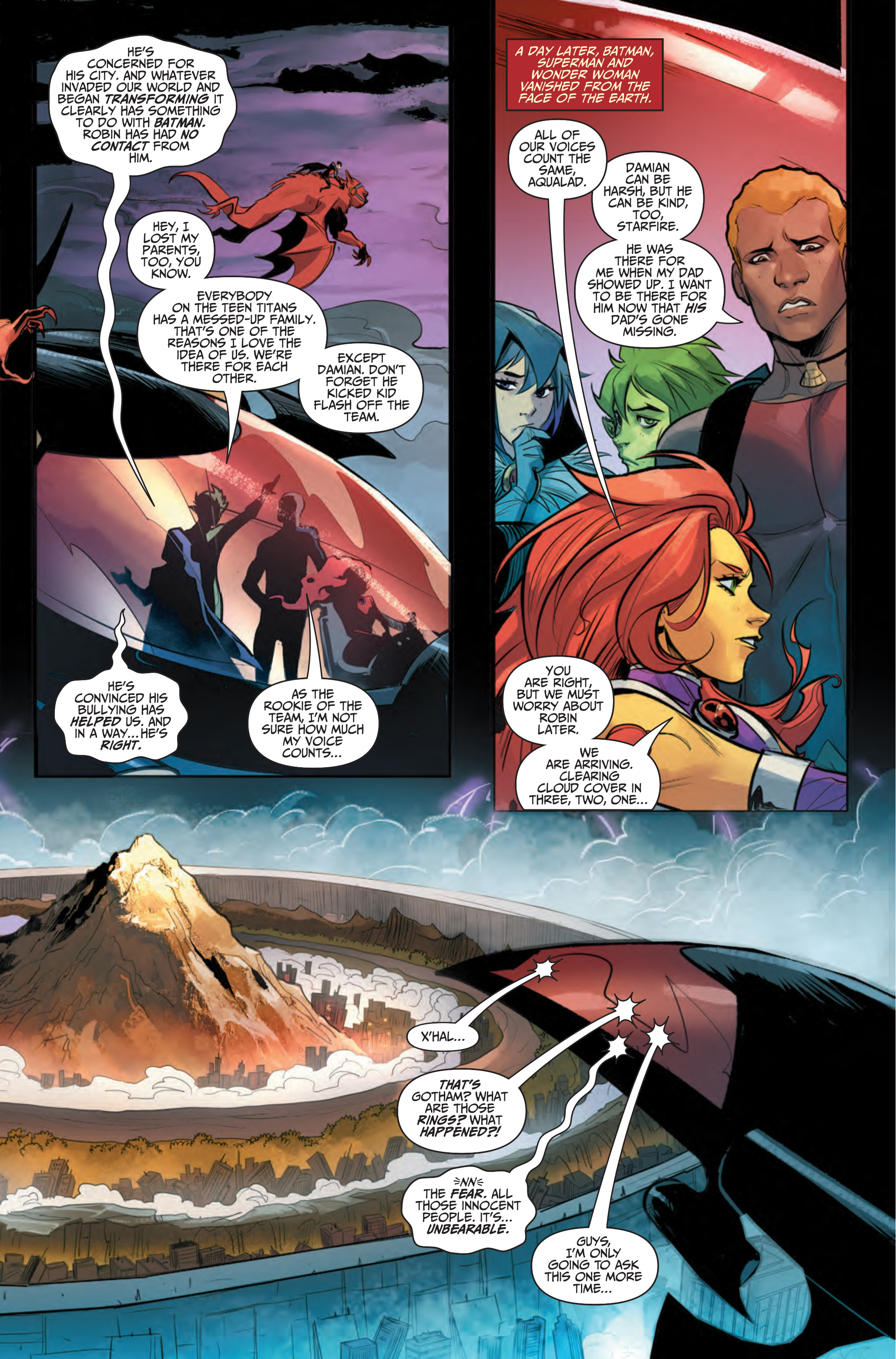 When Batman disappear, Robin brings the Teen Titans to Gotham to investigate what’s going on. On the trip, the Titans discuss Damian’s state of mind and whether they should be going to Gotham without backup or not. There isn’t much time for talk, as they are arriving and are about to touch down in Gotham. As most of the Titans are assisting with what’s happening on the streets of Gotham, Robin has a signal that is leading him towards the mountain. His teammates attempt to get their leader to wait for them, but he has too much of his father in him—Damian heads into the Riddler’s labyrinth alone.

Once Robin is in the maze, Riddler immediately starts taunting him; which almost gets Damian killed, until he gets some help form Green Arrow. Robin continues to refuse help, running ahead of the emerald archer. Green Arrow catches up and over the course of their conversation; the Riddler does what he does best—and offers a riddle to the heroes, which results in a fake, dead, Batman.  The fight is cut short with the unexpected help from Harley Quinn and Killer Croc.

ALL BECAUSE  OF ONE LETTER

Harley and Croc know where the center of the labyrinth is, but couldn’t answer the riddle presented by Nigma—with the unlikely team up, the Gotham Resistance is able combat the Riddler in his giant Minotaur suit of armor. All it takes is Damian answering the riddle to defeat Nigma and his armor.

The Batman Who Laughs, disappointed that the Riddler left a solution to defeat him, has prepared a wild card to distract the heroes while his master finishes his work. The wild card is a very special nightmare Robin—Damian Wayne.

Benjamin Percy does a great job with the writing hear, though I have no doubts that there was some collaboration with Scott Snyder to make sure everything was seamless for the Metal event. There is some fun dialogue that involves Damian, which has been one of my favorite parts reading these issues. The overall script seemed to match the tone of everything else we’ve seen in this event thus far, which makes reading between books easy.

The biggest change, while in the scope of the Metal event, is the art. While Mirka Andolfo’s art is great, it does seem cartoonish for a story that is so dark. It seems to work for most of the book, but once we abandon the Teen Titans and are within the labyrinth, it feels off. The most jarring—The Batman Who Laughs. Compared to Greg Capullo’s nightmarish design, Andolfo’s version seems like something you’d see on a Saturday morning cartoon.

I haven’t been reading the Teen Titans line, but I have to assume that this feels more like a one shot than something that is happening within the confines of the current story Percy is telling. However, it fits in with the Metal story line seamlessly. I’m not sure how much input Snyder had, but Percy handled this very well. My only true problem with this issue was the art—it seemed out of place, especially when it comes to the characters that were birthed from Metal. Still, “Gotham Resistance” Part 1 is well worth reading, more so if you’re reading the DC comic event.