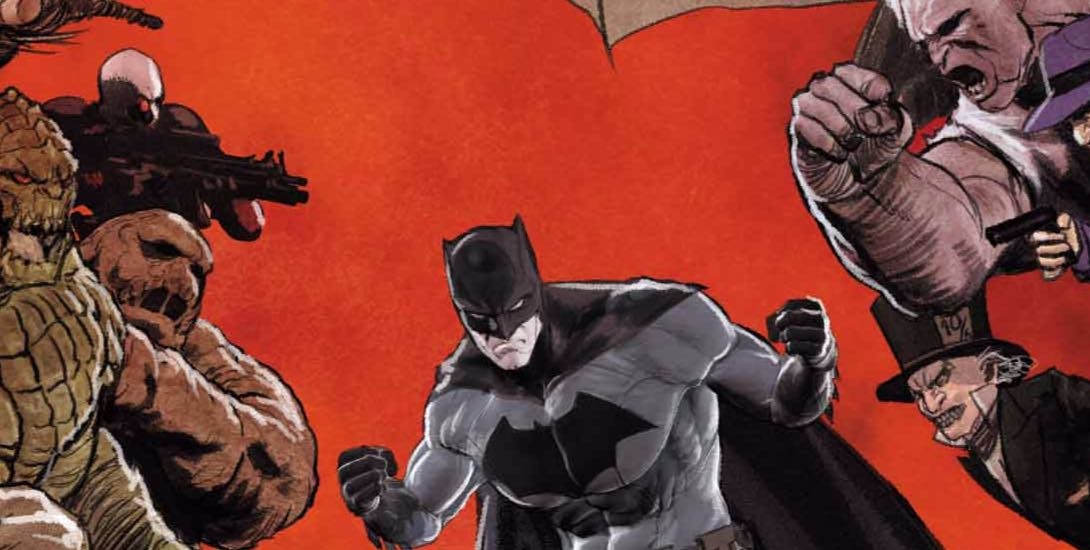 “The War of Jokes and Riddles” Part 4 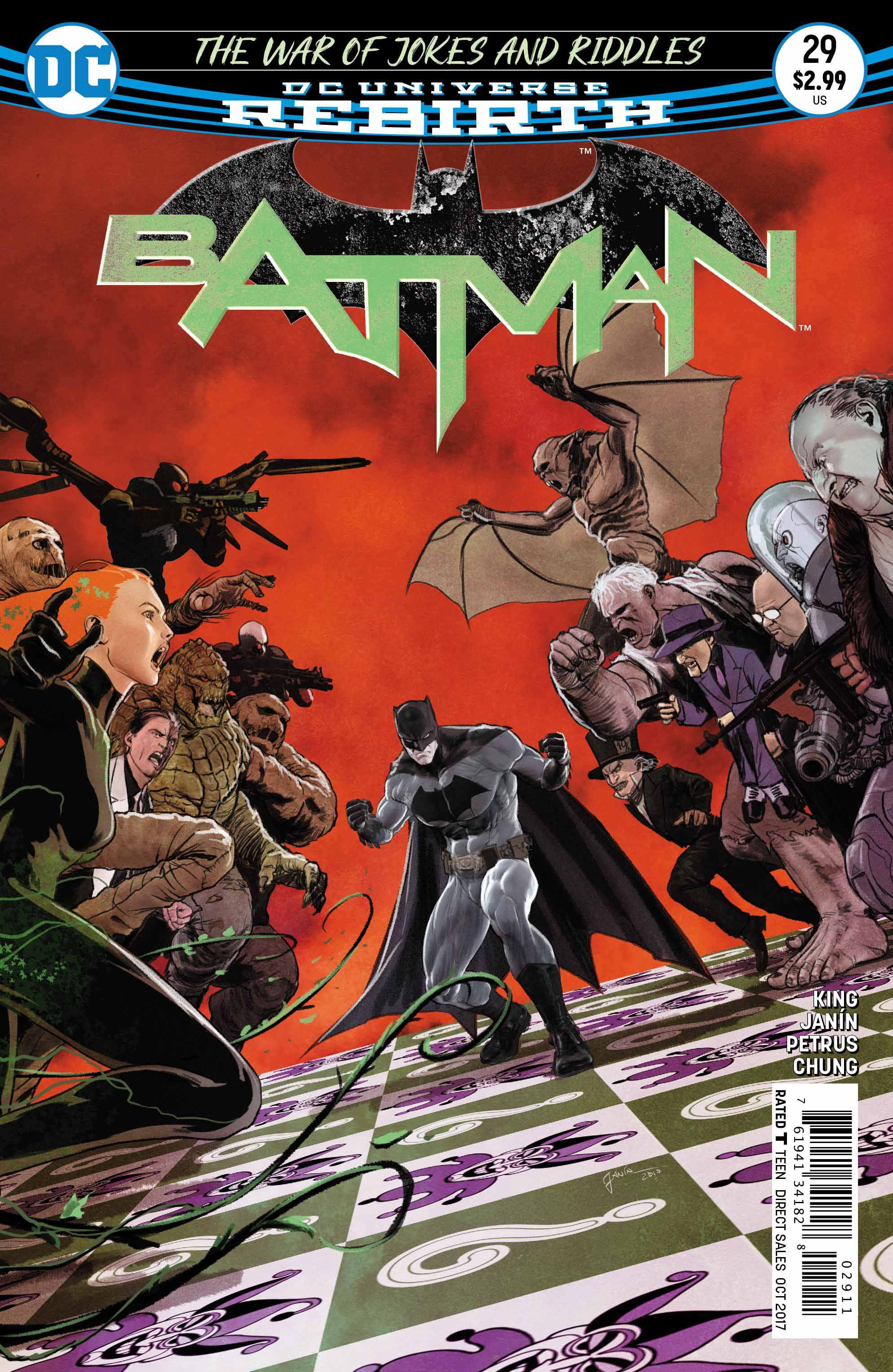 With the war between the Joker and Riddler wrecking Gotham City, Bruce Wayne attempts a non-violent solution to end the violence.

Writer Tom King creates another interlude for the war that makes for an interesting character piece for Bruce Wayne. In order to stop further bloodshed, Wayne holds a dinner party for the Riddler and the Joker. The premise is both ludicrous and intriguing. It is highly amusing seeing the normally decadent Wayne Manor be populated with Batman’s rogues gallery.

King creates a somewhat ridiculous scenario of dinner with the most wanted serial killers in Gotham and then subverts the readers’ expectations. One expects a relatively-quiet dinner scene between two warring factions to be about each side’s motives. And for part of the issue, King touches upon the Riddler and Joker’s true plans.

However, the script pivots and Bruce Wayne takes the focus. In a subversive piece of storytelling, we see how Wayne-not Batman- feels about criminals and vigilantes taking over the city. It is weird and compelling to see Wayne’s perspective on the war. There is a particularly fascinating scene where Wayne loses his temper when talking about Batman. King makes it intentionally ambiguous whether Wayne is just acting or if he truly harbors some resentment against his alter ego. The scene flips the script, where people expect the villains to get emotional over Batman, not Bruce Wayne. King continues to twist tired, old tropes by presenting Batman with a bizarre moral dilemma in the issue’s ending. It is unexpected, strange, and captivating. 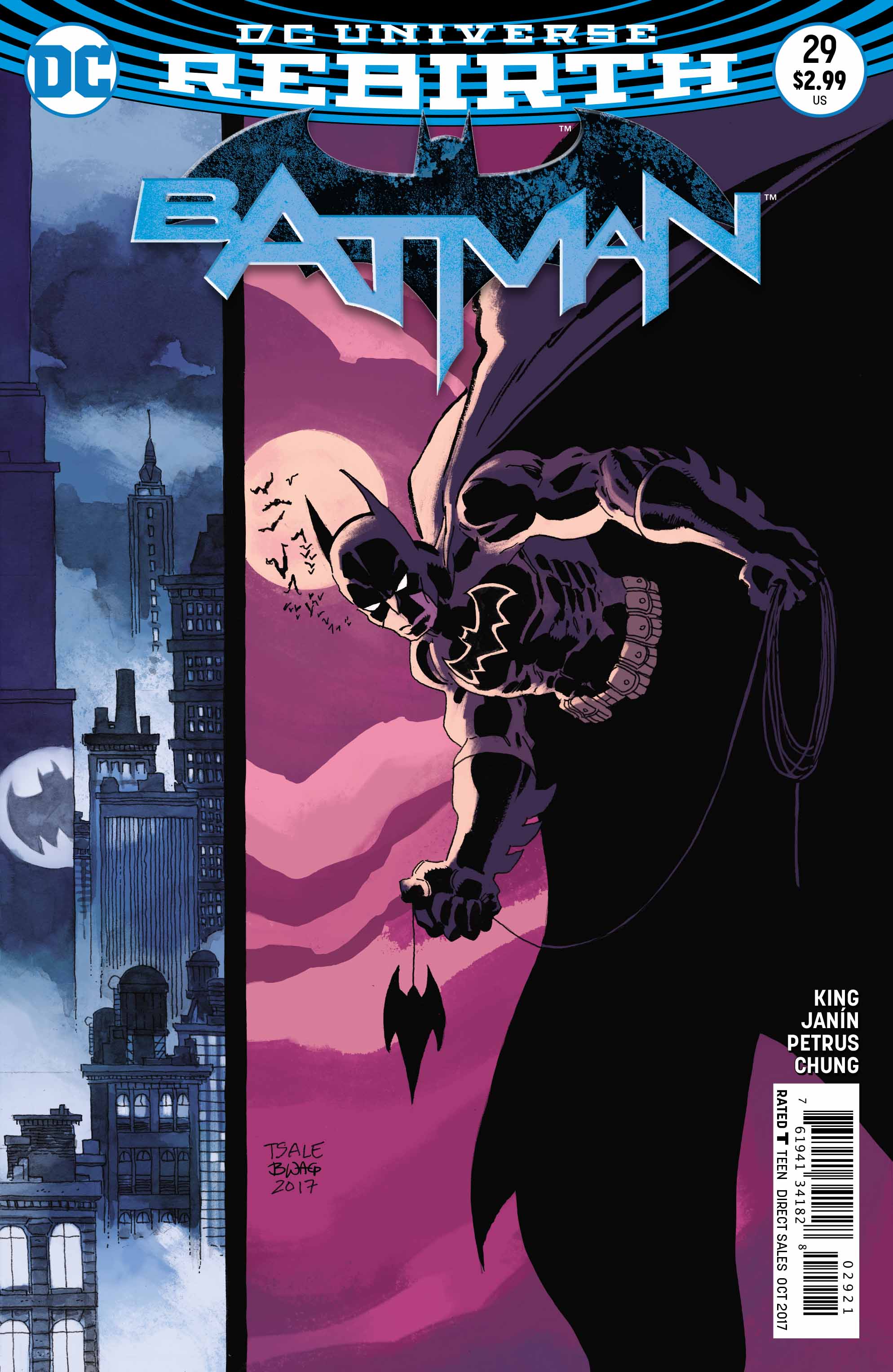 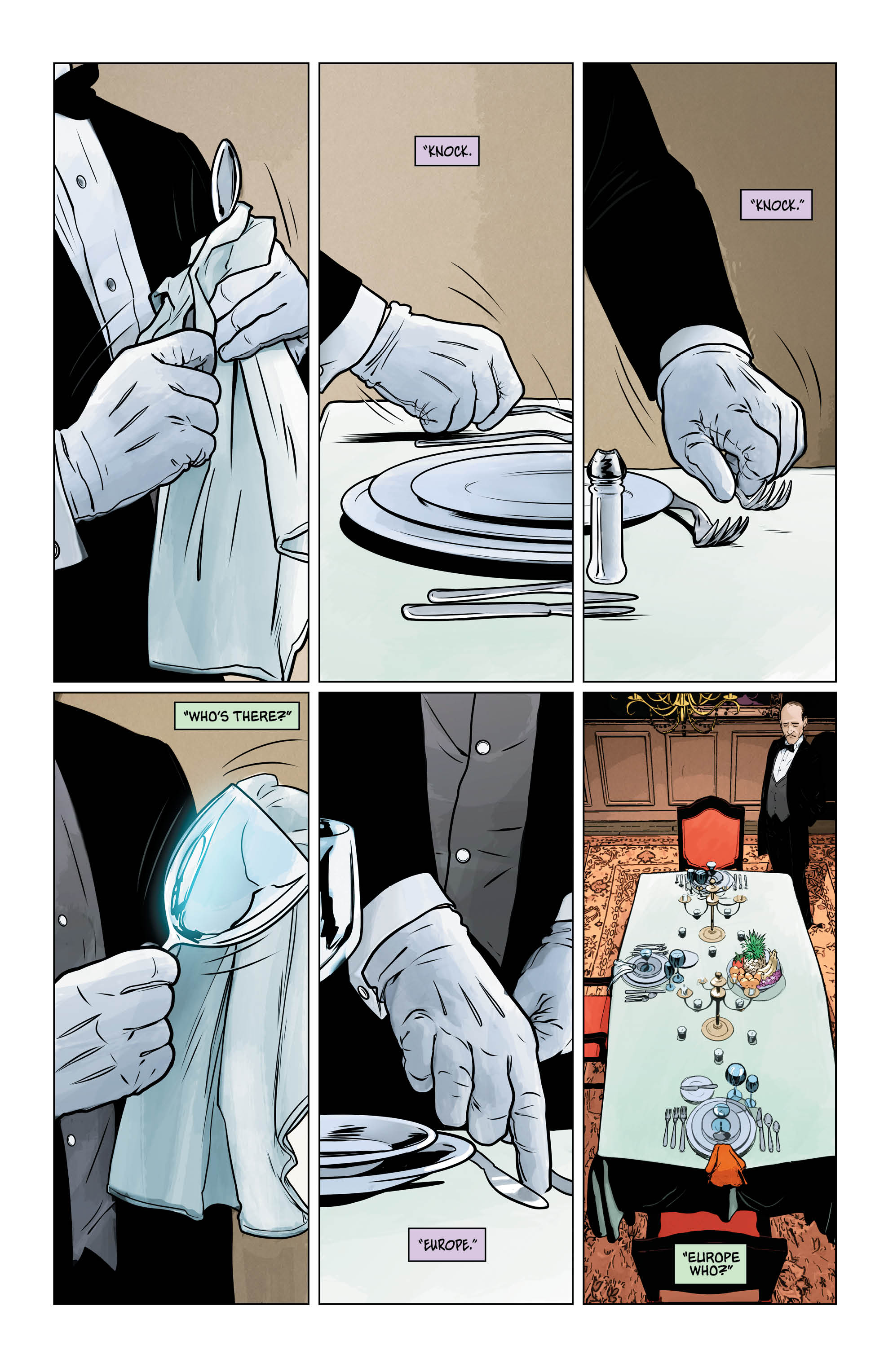 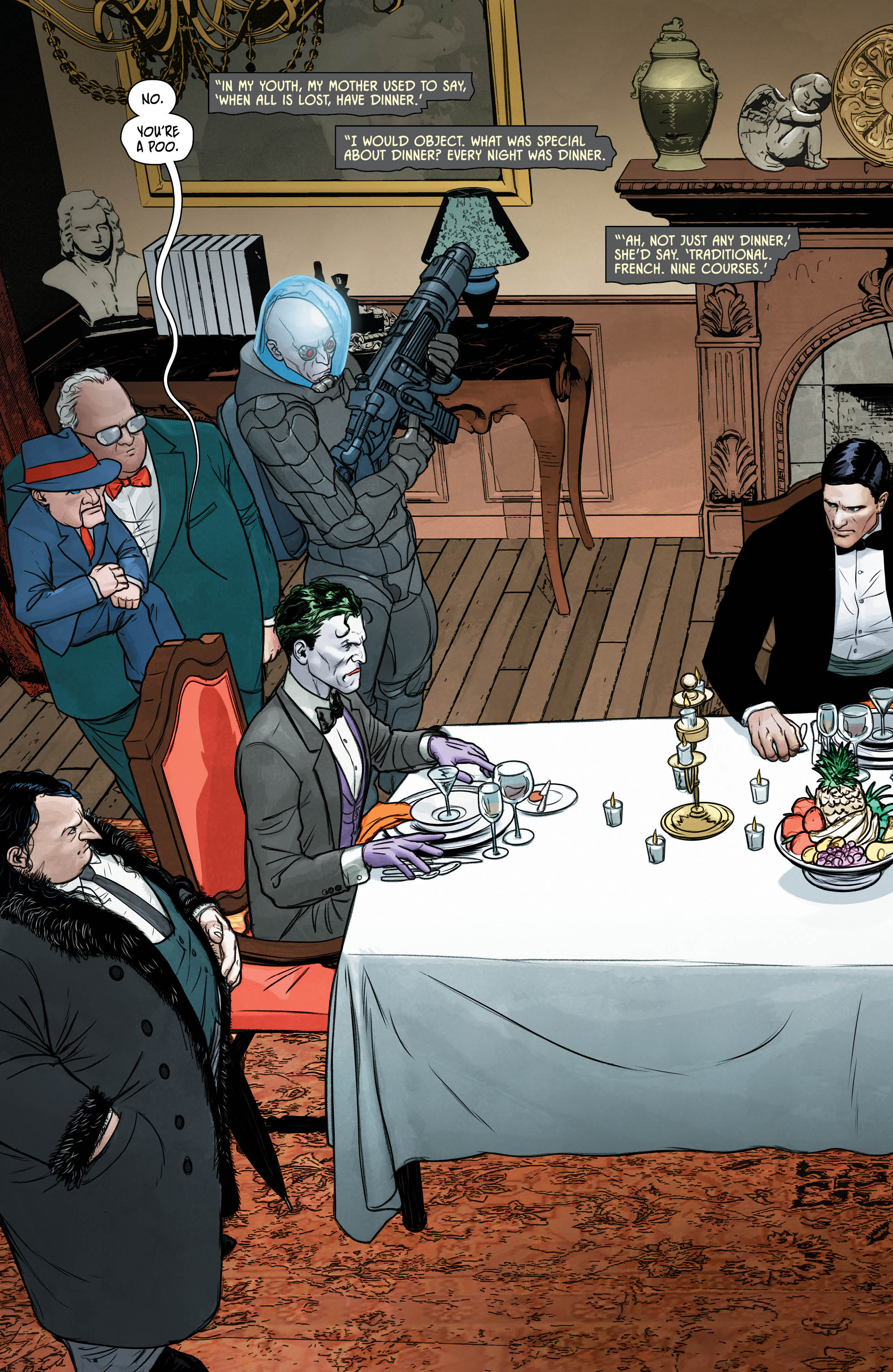 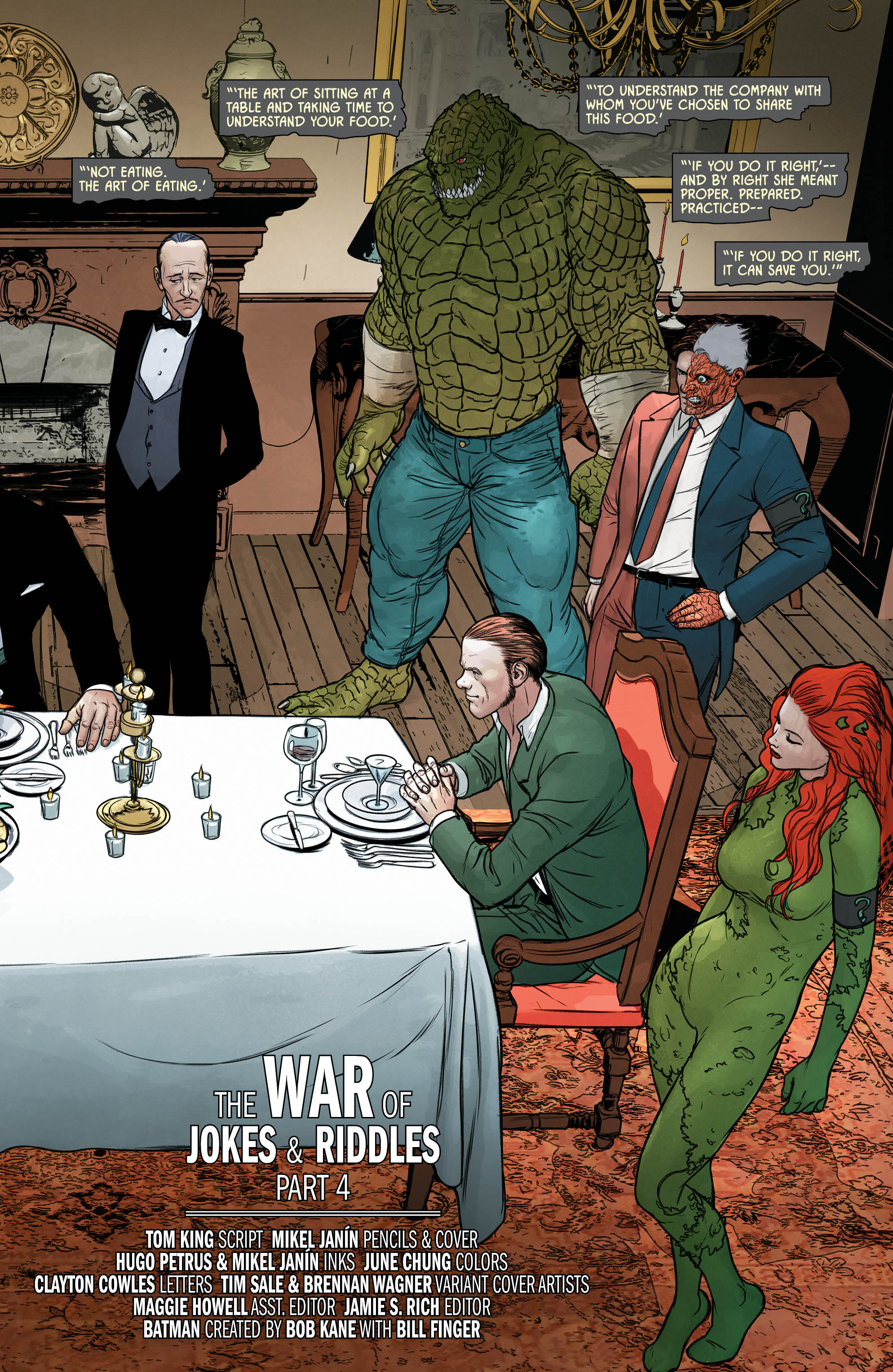 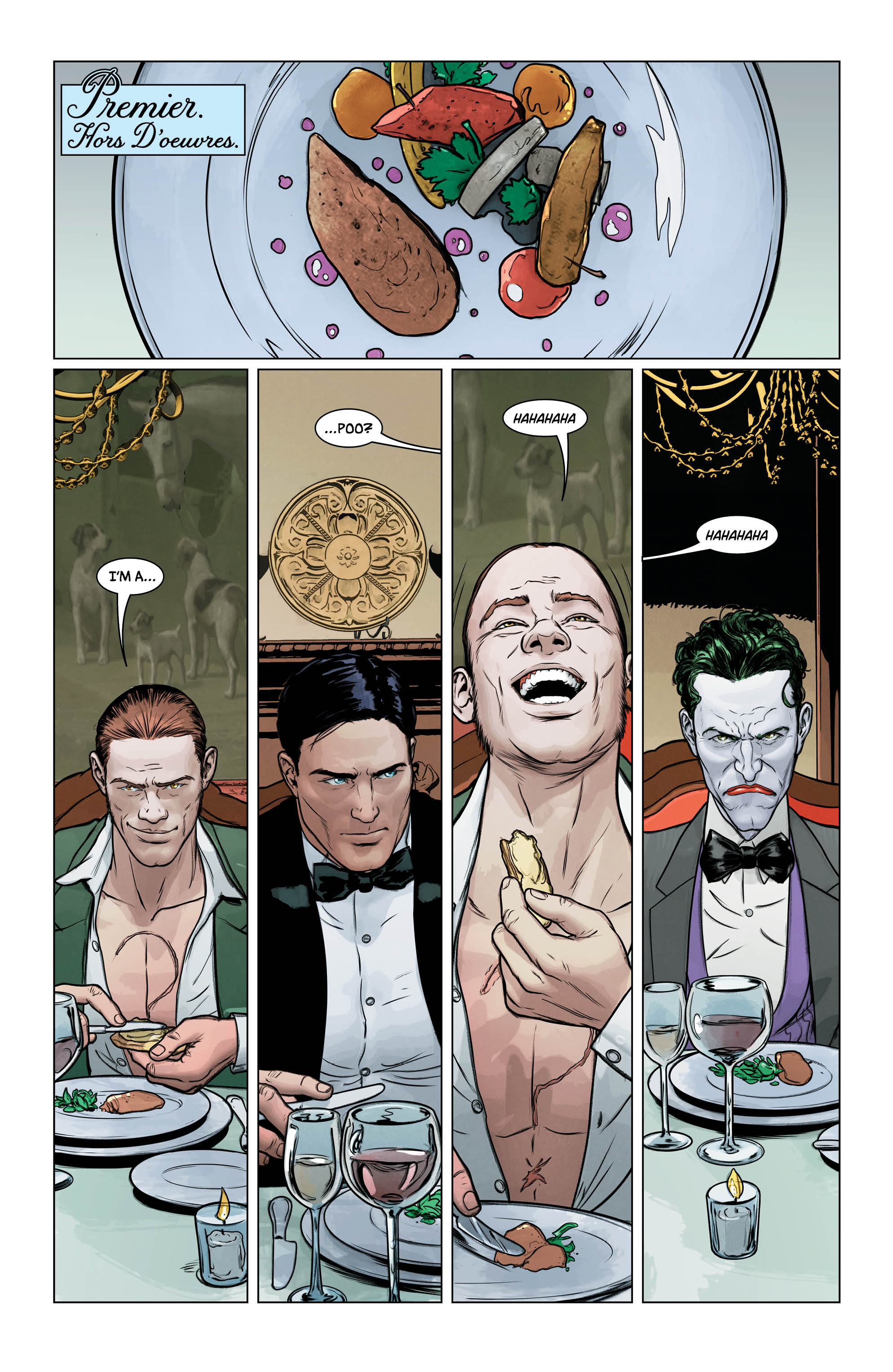 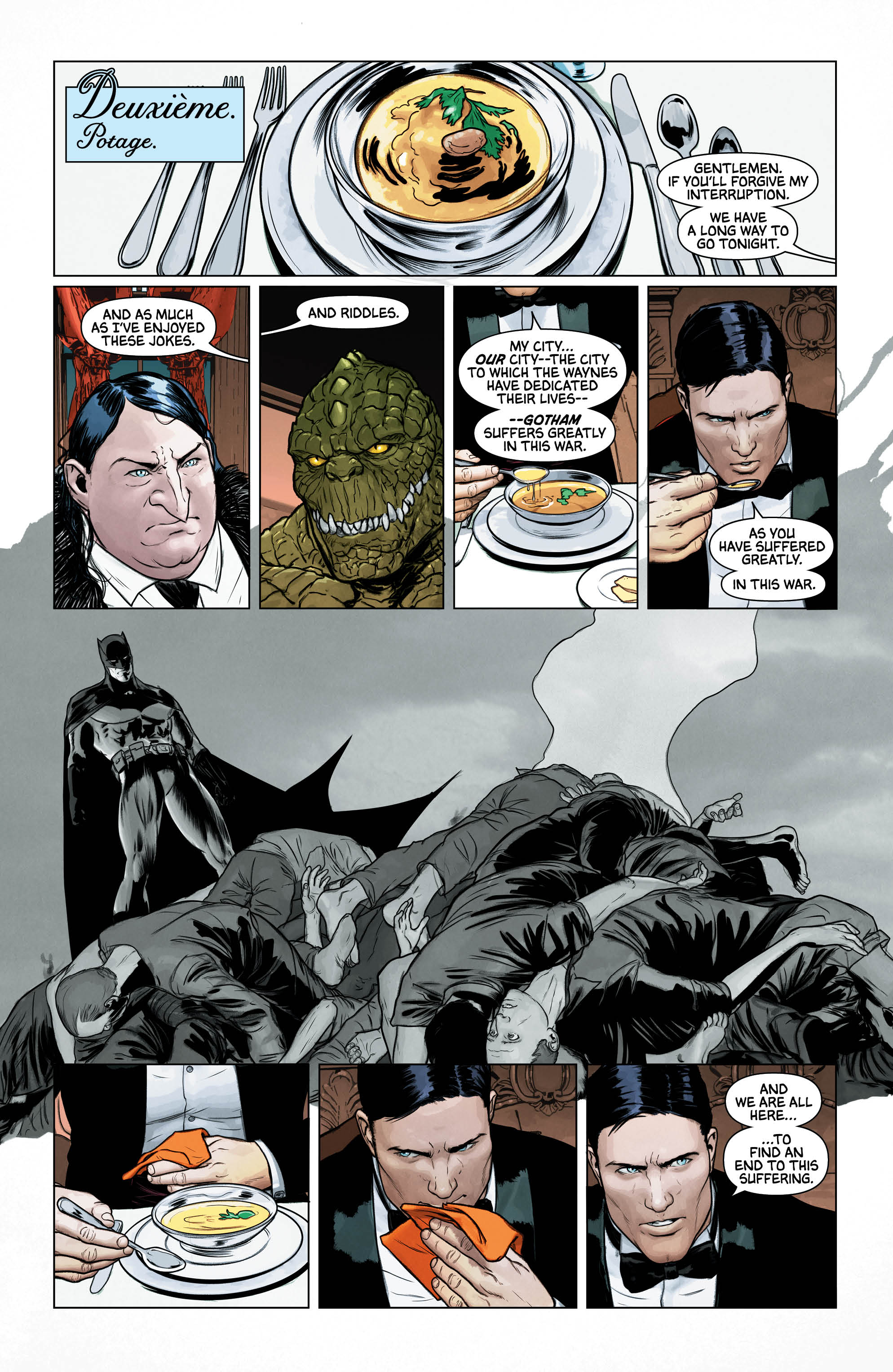 Artist Mikel Janin’s art fully enhances King’s script in every way. The intricate detailing and scale of Wayne Manor gives a sense of opulence and elegance in the comic. In the meantime, his character work is excellent and fun. Janin’s storytelling skills are put to the test due to the decompressed script. There are a few pages where the characters are literally just talking and eating salad. But Janin draws their body language and facial features so well, you know what the mood is even without words.

However, the greatest flaw this issue has is not within this particular comic, but with how King chooses to present “The War of Jokes and Riddles”. As said in previous issues, King writes events in very broad strokes, while neglecting plot details. The storyline is four issues in and most of the main events are presented in very vague ways. King tells us there is a lot of destruction, deaths, and battles, but we barely witness them firsthand. So when King presents the war as a long-standing battle that has ravaged Gotham, it is hard to make that emotional connection as a reader. We are vaguely told that it is bad, but rarely are shown how bad it is. The lack of specificity makes the emotional point with Bruce Wayne ring a little hollow.

King and Janin created probably the most enjoyable issue of “The War of Jokes and Riddles”. Thanks to King decompressing the events more, readers are able to enjoy the intimate character interactions and story pivots more. One hopes that King will continue writing the rest of the storyline with a slower pace so readers can enjoy the details more.