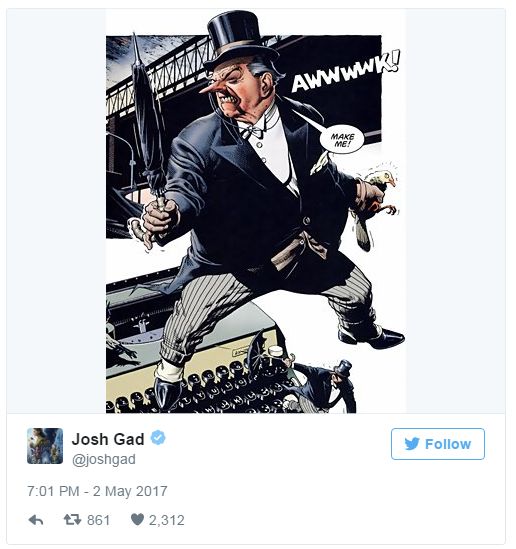 This is causing a murmur, and fans are speculating him as a casting choice. We’re loving the idea of Josh Gad as the Penguin in the DC Extended Universe. The Batman is in its works, and although we don’t have a release date, we can expect the introduction of a few classic Batman villains. Already, we have the Joker, and Harley Quinn, alongside the rest of the Suicide Squad, including Deadshot. Having members like the Penguin and Riddler are only expected.

Josh Gad, a talented actor, known for his voice as Olaf in Frozen, and Lefou in the live-action Beauty and the Beast, would match nicely as the Penguin, with the right attire and makeup, of course.

The Batman is happening, although it has had a few twists and turns. It didn’t have the easiest start; they had been struggling with the script and their cast and crew were not solid yet, however, all is good. Director Matt Reeves has taken over the project and will start as soon as he’s finished War for the Planet of the Apes. Each Batman villain is such an eccentric character, and Josh Gad has a grasp on eccentric, expressive acting.

Each Batman villain is such an eccentric character, and Josh Gad has a grasp on eccentric, expressive acting. With make-up and costume, he would fit a strong Penguin, I wonder if he could live up to Danny DiVito’s acting!