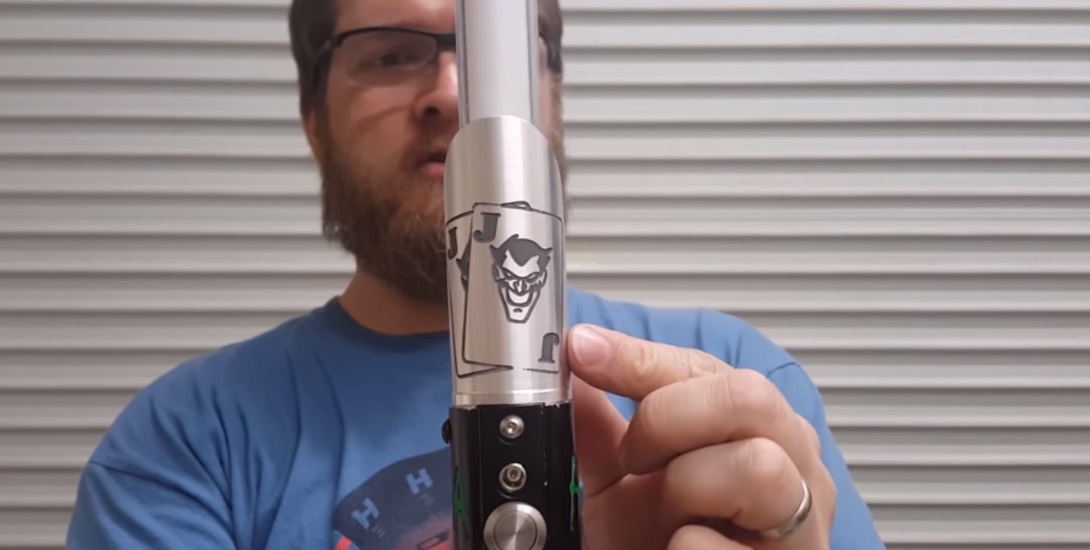 The Joker and Luke Skywalker.  When you think of Mark Hamill, those are probably the two characters that pop up in your mind.  Playing the Jedi Knight hero in the original Star Wars trilogy and voicing the iconic Batman villain in various incarnations since 1992 from Batman: The Animated Series through this month’s The Killing Joke, these roles are cherished by fans of both franchises.

Well, customers of Hampton’s Hand-Crafted LED Sabers, who let you customize your very own personalized lightsaber for your Jedi or Sith needs, funded and created a Joker Lightsaber for Hamill as a thank you for bringing to life these two historic characters.  The lightsaber features a purple grip, “Ha Ha Ha” wrapped around the grip in Joker green, and Joker cards etched onto the emitter shroud.  And last but not least, when ignited you hear the sound of Hamill’s iconic Joker laugh.

In the video below, Hampton’s Hand-Crafted LED Sabers’ owner Ken Hampton is shown presenting the saber and you can see that Hamill is very appreciative of the gift when he learns it was built as a gift for him, but handed it back saying “I can’t take gifts like this.”  Hamill eventually accepted the gift and lets Hampton know that he will feature it on his Pop Culture Crushing show.

What a great way to thank Mark Hamill for his amazing work as Luke and Joker!