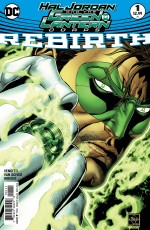 In my opinion, Robert Venditti was writing some pretty good Green Lantern stories when he took over for Geoff Johns a few years back. He did what any great writer guiding my favorite space cops would do and added things to the mythology that hadn’t occurred to anyone else. In particular, I liked what he did in Dark Days.

But in the advent of the DC You initiative, Hal Jordan’s stories were one of several that lost a step. I guess it just happens sometime. Living up to the name “Rebirth,” it seems Venditti has returned to form and is bringing Hal and the rest of the Green Lantern Corps to their roots. It certainly helps that he has the mighty Ethan Van Sciver backing him up, who continues to show why few can touch him when it comes to penciling GL adventures. This issue looks every bit as good as the similarly titled classic, Green Lantern: Rebirth.

I guess no GL story seeking to get back to basics would be complete without Sinestro as the antagonist. Now in control of Warworld and looking a bit aged, the Bearer of Yellow Light is resembling David Niven these days. He feels as though he is victorious and ready to take his place in history. I’m not so sure his cohort Lyssa, who kind of looks like Julie Strain, is ready to accept that.

We’re given a quick primer on the history of Hal and the Corps, something many of these one-shots have done. Thankfully it doesn’t dwell on the past for too long and instead opts to move forward as Hal forges his new ring, causing reverberations to be felt throughout the cosmos. Say goodbye to Hobo Hal!

Although we’ve yet to see what this book is truly capable of, I sense this will be one to watch. In two weeks, maybe we’ll have a better idea which is the best book featuring ringslingers in Sector 2814.

Telltale’s Batman Will Premiere in August With Disc in September