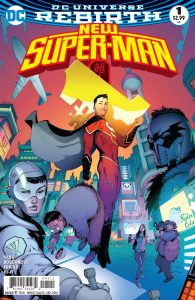 At first, he’s a real dick, a bit of a bully. When one gains superpowers, normally good becomes better and bad becomes worse. Kenan seems like the type of person who is inherently good (there’s actually a reason as to why he has a chip on his shoulder), but just needs the right push to become someone better. Luckily for us, Gene Luen Yang does a pretty good job of chronicling the onset of the hero’s journey in just one issue. I guess we have come a long way from when writers had to do this in but a few panels!

A supporting cast is already being built and I’m admittedly a little indifferent as of now, but don’t mistake me for being dismissive. Kenan has similarities to Clark Kent as he was portrayed in 1938 and Laney Lan is pretty much a Lois Lane analog. This is all well and good, but I do hope that more original characters are built as opposed to just making Chinese counterparts of those we already know and love. At least Kenan’s dad is definitely NOT Jonathan Kent.

If you were paying attention a few months ago when the “Final Days of Superman” were occurring, you will see things start to come full circle here. Kenan gains powers thanks to the same shadowy group we got a glimpse of in that story. I’m guessing they aren’t as virtuous as he’ll become and perhaps they will join the ranks of his arch-nemeses.

I would have to say this was a solid origin story and I’m looking forward to seeing where this young hero is headed. The cliffhanger, which was a stroke of genius, still toes that line of holding a mirror up to established characters. Yang and Viktor Bogdanovic have captured all the fun of an Elseworlds tale that just so happens to be set in the DC Universe proper.