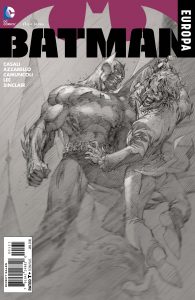 After a long, and I mean long wait, Batman: Europa was finally released last November. While it wasn’t anything groundbreaking, it was still an enjoyable story. However, I’m not going to hash through the plot (you can read my initial review here), but rather dissect the re-release, Director’s Cut style.

Sparingly, DC has slowly been releasing these types of issues, which shows the unfinished pages of the issue followed by the script. So, you’re kind of getting two comics in one. Not bad, right? Well, you’re paying for it too ($5.99 instead of $2.99). I’ve grown quite fond of these unique issues. While I’m more of a digital buyer these days (I don’t have the space to store), I make sure to get my hands on an actual copy. They’re interesting, fun and give you an insight on the earlier steps to finish a comic.

While I’ve picked up a few Batman Director’s Cuts before, they really chose the perfect issue this time. Jim Lee’s art is fantastic whether it’s colored in or just sketched. He’s always been holding the throne for me on my favorite Batman artist and this may have sealed the deal. Yes, side-by-side, the finished product is more impressive, but it really stands well on its own without the coloring. If Jim Lee is the artist on a Batman book, spend your money.

As for the scripting, I’m a fan of seeing the writer’s layout for the artist. The tag team of Azzarello and Casali stick to the normal ways of scripting, which makes for a normal-looking layout which is also easy to read.

If you haven’t read Batman: Europa, it’s a fun story and you should pick up the original run, which is now collected in a single hardcover book. But should you double-dip and pick up the Director’s Cut? Unfortunately, that depends. Myself being a big making-of guy will always buy myself the latest one to be released. If you find yourself agreeing with me, then spend your money. If not, probably better you hold off on this one.

The Flash Finds His Director