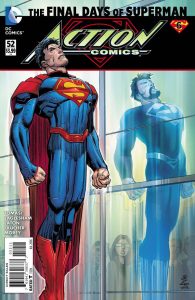 Part 6 of “The Final Days of Superman” happens to take place within the pages of Action Comics’ New 52 finale, a title that will return to original numbering next month. Regardless of what you have felt about the crossover to this point, trust me when I say this issue really kicks things into high gear.

This week’s chapter starts much like last week’s, with Superman and Wonder Woman flying high with the Batwing in tow. There is a bit of a difference this time around when Superman nearly faints due to his ongoing battle with Kryptonite poisoning while in midair. Yes, the situation is getting a bit more dire.

We see a lot more of the man infused with Super Flare radiation who thinks he’s Superman. He first has a bit to say to New 52 Lois Lane before dragging her on an expected house call to the home of none other than Pre-Flashpoint Superman. It makes for a very awkward scene – in a good way. Let’s just say it has, um, some explosive results.

If you were hoping the cover art kept its promise of the two Supermen meeting, I will say that it does happen, albeit briefly. I’m sure there will be some intriguing dialogue exchanged between those two in the coming weeks, which I anxiously await.

It’s worth mentioning that artistic duties were split between Dale Eaglesham and Scot Eaton. What’s to be found is very pleasing, although their work is distinctly different. There’s so much going on that I don’t think the transition will hinder your reading experience very much.

With several threads converging in a most exciting manner, I would have to say this is the best chapter of the crossover in weeks. Great Rao, I can’t wait to see what happens next week when the story continues in Superman/Wonder Woman #29.