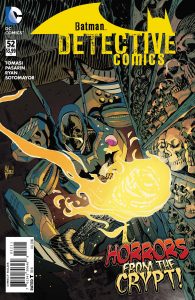 Well, folks, The New 52 run of Detective Comics expires this week. While Scott Snyder and Greg Capullo’s Batman run gave us a handful of definitive story arcs for the modern era, let’s not forget that ‘Tec brought us Tony Daniel’s take on The Dollmaker, Jason Fabok’s gloriously fierce renderings of our dear Dark Knight, and some recent tales with Jim Gordon’s Batman that some – including me – will argue were better than even Snyder’s.

This concluding issue starts off by teaching us the horrifying extent of what happened to Gordon and his unit years ago in the desert. In the present, he relies on his trusty mech suit that I and many others are indifferent to, but extreme circumstances call for extreme measures. Wouldn’t you want that kind of protection if you were going up against a bunch of crazed cultists?

Speaking as someone who has a rich history of playing video games, this issue felt like a Ghost Recon/Tomb Raider/Resident Evil 4 mashup – and I mean that as a sincere compliment. Artist Fernando Pasarin did a fine job conveying the needed atmosphere for a grim, worldly Batman story and putting the reader as close to the action as possible. You will almost feel like you are in the thick of it with Gordon and the Marines. On that note, I really like how this story explores Gordon the serviceman.

Amun-Set rears his head and is a truly grotesque villain that I wouldn’t mind seeing returning. He and his cult could have stood to have been fleshed out over the course of several more issues, but I do realize Peter Tomasi did the best with the space he was allotted. Things didn’t end up going well for the brute, although we’re talking comic books here, so it’s not beyond the realm of possibility that we could see him again.

While this didn’t quite feel like the finale to a volume for a flagship book, it was a satisfying read nevertheless. I maintain my position that Tomasi wrote the best Gordon/Batman stories and I think this two-issue arc helps my case.