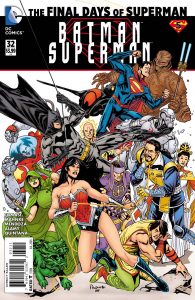 The Trinity unites this week in the fifth chapter of “The Final Days of Superman.” Sure, the title of the book may be Batman/Superman, but it would be weird to jettison Wonder Woman following the events of last week’s chapter.  This issue not only captures the “buddy” dynamic that I and many others like seeing in tales involving the World’s Finest duo, it also sees Clark and Diana seemingly reunite as a couple – just in time for the former to supposedly die in the coming weeks.

Oddly enough, this doesn’t pick up directly after the cliffhanger seen in last week’s issue of Superman/Wonder Woman, making me wonder if it will eventually make for a jarring transition in the trade paperback. Ulysses is nowhere to be found as the Trinity flies high, entering Chinese airspace to track down a Super Flare energy signature.

Their violation of foreign borders puts them in the sights of the Great Ten, whom they end up engaging in combat. While the Chinese heroes had interesting sets of powers, the battle dragged on way too long and lasted the bulk of this issue before the two super teams came to terms.

Fortunately, some major groundwork is laid for the upcoming New Super-Man title that launches this summer and saves this issue. Some crafty dialogue and pseudoscience is offered by Peter Tomasi and will hopefully see more development over the next three weeks, as I know several people looking forward to the adventures of Kenan Kong.

Doug Mahnke’s art is something to behold and I can certainly see why he has long been one of DC’s go to guys. The first two-page splash offered will cause you to step back for a moment to take it in.

While this wasn’t the strongest issue of the crossover, the final pages make it an essential read. Join us next week as the adventure continues in Action Comics #52.