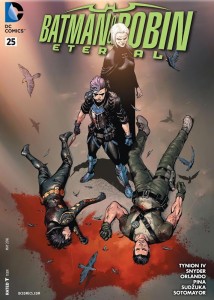 It all comes down to his… almost. Batman & Robin Eternal inches closer to its epic finale, and sets us up for a main event showdown between Dick Grayson and Mother.

This week is a very similar issue to last week, and doesn’t seem to move the story that much further along except in one way. Just like last issue, the team is fighting the mini-orphans around the world while Icthys has children worldwide on a mission to kill adults. Midnighter is with Scarecrow to crank out his fear gas, which seems to be the only antidote. Meanwhile, Dick is in the middle of a fight with Azrael, while Mother tries to convince Harper to kill Cass. That’s a lot for an issue… but is pretty much where everyone was last week. Alas, Dick and Azrael call a truce, Harper holds off, and the fear gas is distributed worldwide and snaps the kidea out of it.

There’s some resolution this week and instead of a cliffhanger, it’s more of a tease of what’s to come in next week’s finale. This series has been mostly about Dick, Harper, and Mother, so it seems only fitting that it’s down to them. I have no problem with that because, at times, this book has seemed crowded with characters. There’s a splash page towards the beginning showing every member around the world taking on the bad guys, which is cool and all but not necessary. I mean, how big of a factor has Damian, Catwoman, Katana, Black Canary and Talon been in this book? Eh, not very and I didn’t even nerd out when they got mentioned.

The art this week is up to level of the run thus far, if not, just below. There’s nothing bad and everyone is drawn well and with some good emotion, it’s just nothing stood out as incredible to me.

Overall, an okay issue for the series that sends us into next week’s finale with a little less emphasis and excitement than I was hoping.