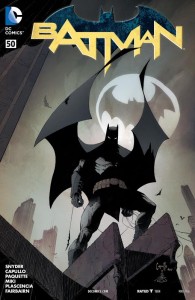 Batman returns, “Superheavy” ends, and Greg Capullo signs off. There is a lot going for Batman #50 and it delivers on some, not so much on others. Let’s start with the good.

Batman is back, and in a new suit nonetheless. This team of Scott Snyder and Greg Capullo have been going strong since the launch of the New 52, and Batman has been the most consistent book I’ve read that you can bank on being great. Now, you could say that it’s just because of Batman (agreed), but to get a good Batman story, you need someone who understands the character. It’s arguable that no other team knows Bruce Wayne/Batman better than these two. Snyder’s dialogue and actions for the character are so powerful and spot-on, you’d think he created him in the first place. As for Capullo, his emotions are perfect on the Bruce front, and the physique and action of the Dark Knight soar. It’s no different this issue. Batman has a wonderful return and his words make you want to just stand up and cheer. The atmosphere is drawn perfectly and creates the right mood. As for the suit? It’s fresh, but classic Batman at the same time.

Another standout here is the relationship between Gordon and Batman. It has been a favorite part of Batman history for me, and the two pick up right where they left off. Gordon tries apologizing for trying to fill in, but Batman doesn’t need to hear it. Instead, they work together to take down the threat and save the city. It was great revisiting these two old friends again.

Those are the highlights of the issue. “Superheavy” hasn’t done much for me other than make me look forward to Batman’s return. Sure, Gordon has done a decent job and I really like the character, but his arc just didn’t resonate. Of course, he didn’t have much help with Mr. Bloom being the villain. He leaned too much into the supernatural and was very preachy without really making me feel like he was a threat. Here, he meets his ultimate demise and the reveal on who he is (which isn’t all that clear) was “meh” at best. Not to mention how he continued to grow like Stretch Armstrong seemed more annoying than scary. Also, his ultimate plan was to build something that would wipe out Gotham. Been there, done that.

There were good things in this story (Bruce, Julie Madison, the meaning of Batman in issue #49), but it just wasn’t for me. I’ll continue to pick up anything this team puts out because they are solid. “Superheavy” was just a little too light for me.