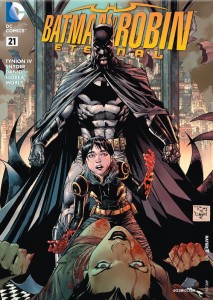 We head to the past in Batman & Robin Eternal #21 this week. The strongest part of the story thus far is in the flashbacks, and that’s no different here. Bruce Wayne/ Batman is searching for more answers following the “death” of Mother, while also dealing with another child who has lost a parent.

We first dive right into an awesome few pages of Batman and Robin kicking some ass, drawn to perfection by Tony Daniel.  Robots, your average Gotham bad guys, and even Deadshot can’t escape the wrath of the Dynamic Duo, who follow it up with some quick chatter in the Batmobile where Batman reveals his plans to dig deeper into Mother’s history. When he gets there (on the next page, he’s fast!), he hits up a “fancy mansion” where he meets Miss Marchenko. It’s from there that we hear Mother’s tale, which gives the character some nice layers, adding to her villainy but also making you feel a little sympathetic for her. While I’m not one that usually needs an origin for a villain, it works here in every way.

Another focus of this issue is on Harper Row. A few issues ago, Batman saw firsthand Cass Cain kill Harper’s mother, and we actually start this issue with Harper holding her dead mother in her arms. It’s quite striking. Later, Batman has a great monologue where he’s contemplating on taking the girl and her brother in (much like he did with Dick) but decides to threaten her dad first. It’s badass and very Batman Begins.

A knockout of an issue here. James Tynion IV, a regular on Eternal, crafted a great backstory piece that doesn’t necessarily fill in the gaps, but gives us plenty of layers. The dialogue with everyone is spot-on and the pacing is perfect. Complementing his words is Tony Daniel, whose art has always been some of my favorite.

Overall, one of the title’s best issues and a definite must. You won’t regret it.