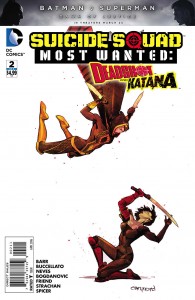 The latest issue in this mini-series that spotlights two characters the general public may not be as familiar with has finally hit stands and may have surpassed the first issue. As you may remember, I loved Deadshot’s half of the book last month, but I wasn’t too keen on Katana’s. I was pleased to find that both delivered in this month’s installment.

They let Katana kick things off this month, portraying her in a rather heroic light, although she does a fair share of slicing and dicing. It’s not too much of a stretch because she’s probably the most heroic character associated with the Suicide Squad.

In this book, she possesses a great sense of wisdom, while also getting chances to showcase her skills as a combatant, as well as her resourcefulness. In fact, there is a ton of action to be found as well as more insight to be gained into Kobra. As I hinted at earlier, I found this half of the book to be much more exciting than last month’s.

As good as that was, it didn’t stop Deadshot’s story from once again taking the top prize. His portion showed how much of a complicated guy he really is. His background might seem a little cliche, being that he came from an abusive household, but it takes some twists and turns that make for a real page turner and should be a treat for those unfamiliar with the character. I would dub it a “bittersweet tragedy.”

The Suicide Squad – albeit with different lineups – show up at the end of both stories, only with different intentions. I can’t wait to see what the next issue has in store for us.