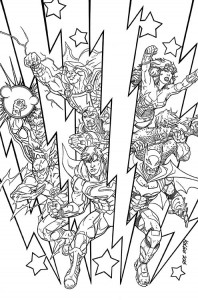 With “Rebirth” just a few short months away, Geoff Johns’ awesome run on Justice League is nearing its end. I really can’t stress how much I can’t wait until the next issue because the latest chapter of “Darkseid War” is loaded with so much comic book goodness that it’s hard to not have what the young people are calling a “nerdgasm.” Each issue from here on out, including this one, will no doubt contain one or more major developments in the DC Universe. How can you resist that?

Artwork is once again provided by Jason Fabok, who never fails to impress. Is it just me or does he keep getting better? Is that even possible?

The backbone of this issue is the uneasy alliance forged between the Justice League and Crime Syndicate, which makes for some very good reading. Every character has their spots and is written to perfection. The balance of storytelling and action should satisfy readers.

Want a few more reasons to pick this up? The Green Lantern Corps shows up in full effect! I guess the man who spent nine years writing Green Lantern couldn’t resist their inclusion. A major death also occurs before a naked Omega powered Lex Luthor shows up. Okay, nude Luthor wasn’t meant to be viewed as a selling point; I just got a chuckle out of seeing a dead serious naked guy make an entrance.

As you know by now, it’s not like me to spoil final pages. This time is no different, but I will say a lot happens in those closing moments. None of us will want to miss the Justice League: Darkseid War one-shot that’s coming soon or issue #49.

Review: Superman: The Coming of The Supermen #1