Review: Superman: The Coming of The Supermen #1 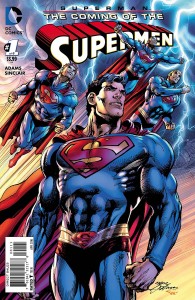 It’s been a few years since legendary comic book artist Neal Adams wrote and illustrated Batman: Odyssey, his return to crafting adventures featuring The Dark Knight. Not keen to rest on his laurels, he has decided to further make his mark on the Man of Steel. Let me tell you, it made for a pretty fun read.

Thanks to Adams’ artwork, the book has a bit of a 1970’s feel to it, at least from a visual standpoint – or maybe that’s just because he helped define comics during that decade. Superman himself retains his classic look, speedo and all, yet has a sleek, modern appearance. The New Gods, who factor heavily into the story, are depicted in their purest sense, as if plucked directly from a Jack Kirby story.

The story sees three freed Kandorian Supermen emerge with the intent of doing some good – at least, that’s what we assume for now. Kandorians have been a hot subject as of late and it’s nice to see yet another way to make use of them.

You can expect to see Superman comic stalwarts Lois Lane, Jimmy Olsen, and Lex Luthor, all of whom are put to good use. Adams and Tony Bedard managed to work in lots of cool “Superman moments,” as I will call them. I’m just not sure where the plot thread involving the Middle Eastern orphan will go.

Perhaps the biggest attraction, at least for fans of Darkseid, will be getting some insight into his lineage. Adams looks to have an interesting take on the character and I can’t wait to learn more of his ancestors. I’m actually a sucker for Darkseid stories, so this book definitely has my attention.

Although this was a solid debut, it juggled a lot of concepts. I hope it all balances out by the time the six issue mini-series concludes.

Neal Adamssuperman: the coming of the supermentony bedard
Share
0
FacebookTwitterPinterestEmail