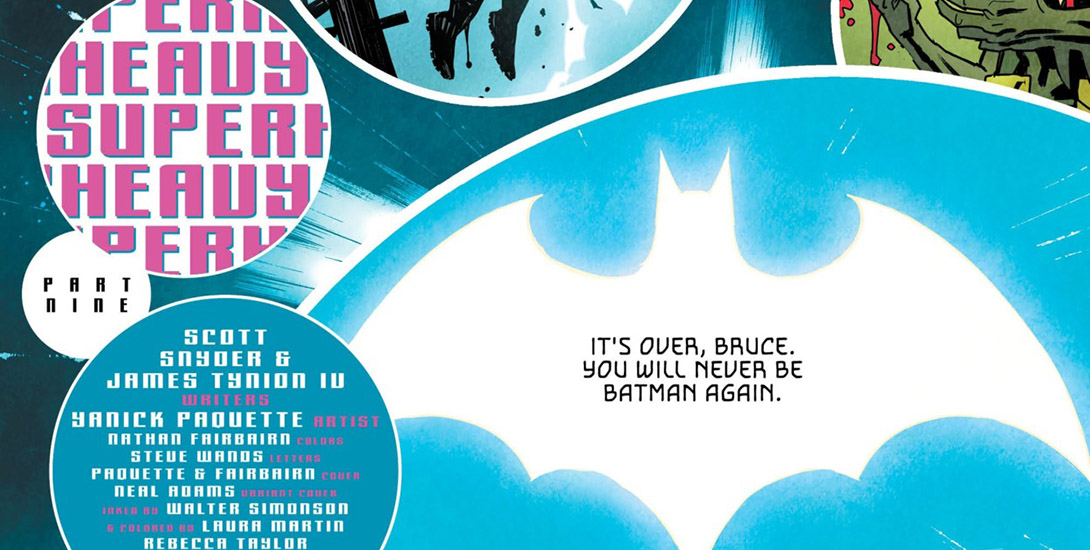 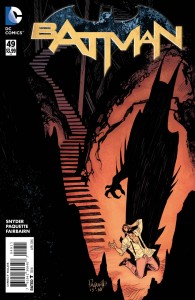 With “Superheavy” nearing its end, regular artist Greg Capullo sat out this issue to get some lead in time on Batman #50. In the meantime, Yanick Paquette has reunited with Scott Snyder to recreate some of the magic from their days together on Swamp Thing. As if there were any doubt, the sweet sorcery is still there.

As per usual, Paquette’s artwork is nothing short of stunning. The real visual treat, however, may be his sublime layouts. We see a recurring theme as many panels are circular and seem to be colliding, much like Bruce Wayne’s worlds.

Snyder (with the assist from James Tynion IV) has concocted what may be the trippiest, most disorienting Batman story that I’ve read since Grant Morrison’s “The Butler Did It” – and I mean that in a good way. While Jim Gordon sits out this issue, Bruce’s quest to reclaim the mantle of Batman reaches its zenith. The scenes involving Bruce putting himself through unimaginable torture are intercut with glimpses at what I interpret as being the lives of other possible Batmen; you will see so many variations of Batsuits that you will think you’ve wandered into a toy aisle.

This issue also contains what are perhaps the most emotional scenes Bruce and Alfred have shared in years. Their surrogate father/son dynamic is at the forefront, with Bruce’s commitment to Gotham City shining through along with his undying selflessness. This further illustrates that you can strip away the memories and trauma, but Bruce Wayne will always intrinsically be Batman.

I would apply the terms “must buy” and “can’t miss” to this issue. It is a tremendous encapsulation of the sheer intelligence and intricacy found in Snyder’s run on the title.

The Batman is back!