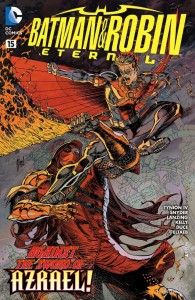 Batman & Robin Eternal continues the story from a few issues back, switching from Dick and his group to Gnosis and St. Dumas, where Red Robin and Red Hood are ready to infiltrate. As most of us know, Azrael is never far behind in discussing St. Dumas, and fills up just as many pages as the star of issue #15, Red Robin.

At first, Tim Drake brings Jason Todd to the door of the secret city, saying how Azrael “showed him the light” and he’s ready to join him. Next thing we know, Tim is through the gates, Jason’s thrown in a hole and Azrael is said to challenge the Red Robin. Meanwhile, everything seems to be going according to plan, and Jason is counting down toward an escape. Tim is too, until he and Azrael find themselves at the mercy of St. Dumas. But that’s not all folks. Jason progresses through the layer only his mind is infiltrated, and he comes face to face with his biggest fear: the Joker?

Azrael and St. Dumas aren’t my cup of tea. Ever since I was introduced to Jean Paul Valley way back in the Knightfall days of the ’90s, I’ve never really cared for him. His story isn’t that appealing to me, and I simply get bored when he talks about “the order” and “St. Dumas” and all of that. So when I saw the cover of this issue, I thought “bleh,” even though we’ve already seen Azrael in this title (read my review here). However, this issue does a decent job of taking us through the society with Tim, while Jason is busy being Jason. Their countdown was also intriguing, because I felt like I knew what they were counting down to I still had to see it come to fruition. Azrael and St. Dumas? Bleh. I don’t need to rant here. If you enjoy the characters, they won’t disappoint. I don’t, so I didn’t.

The positive side of the issue? The art (go figure). Never heard of Christian Duce Fernandez, but the man is on my radar now. If you haven’t learned by now that Eternal has a consistency for great artists, look at the reviews for the title on Dark Knight News (a good chance I’ve said something every week).

Overall, an okay issue. Some interesting action and great art, but if you don’t get it, you’ll be fine.

A Podcast For All Seasons: S3E1 – We Need To Talk About Batman v Superman