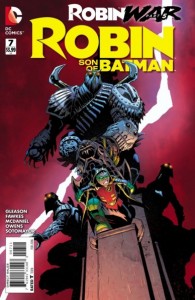 “Robin War” continues this week, with the latest issue of Robin: Son of Batman serving as the fifth chapter. Of all the books to take part in the crossover event proper, I feel this is the one that least kept its identity and more so functions as part of the larger tapestry. It’s not really a bad thing, but it may make this issue more enjoyable for those purchasing this for the crossover element only.

Perhaps that is due to a mostly absent Pat Gleason. Aside from providing cover art and taking story credit, this isn’t really his rodeo. I really wish he were able to provide interior artwork, considering I find him to be one of the best Batman artists of the past few years. Scott McDaniel’s work doesn’t touch Gleason’s, but it gets the job done.

While it felt like most of the issue focused on action with real and amateur Robins alike battling the Talons, we finally see another clandestine meeting between Councilwoman Noctua and the Court of Owls. I really wish there were more scenes like this.

Things are luckily kicked up a notch in the third act when a major villain who doesn’t appear often makes their presence known and the new “Gray Son” is revealed. I was just hoping for more developments with this being the penultimate chapter of the crossover. Be sure to come back in two weeks when the event concludes in the pages of Robin War #2.