This article may contain spoilers for Arkham Knight, including the presence and roles of characters in the game, but nothing too horrible like the identity of the Arkham Knight.

Arkham Knight provides an interactive experience of what is arguably Batman’s longest, busiest, and most difficult night in the history of his existence.  Let’s put it all on the table, all into perspective, so that we can evaluate the scope of the just how arduous this Halloween night is for the Dark Knight.

Arkham Knight is an open-world game in which you play as Batman on a horrible Halloween night, during which a mysterious enemy militia has seized control over the city, leaving the police powerless, and numerous super-villians free to propel their personal psychotic plots.  So basically, you’re free to traverse the open world of a criminally occupied Gotham City — whether walking on foot, gliding through the air, or driving in the Batmobile — and must face much madness pertaining to characters such as Scarecrow, the Arkham Knight, Professor Pyg, the Riddler, Penguin, Two-Face, Harley Quinn, Poison Ivy, Manbat/Kirk Langstrom, Hush, Deathstroke, Firefly, Azrael, Deacon Blackfire…and if you acquire the “Season of Infamy” DLC pack, then you can add Killer Croc, Mad Hatter, Mr. Freeze, and R’as al Ghul to that list.

Imagine that you’re Batman.  It’s Halloween night.  Gotham City has been overrun by an army of tanks and soldiers led by a vengeful fellow who calls himself the Arkham Knight.  Scarecrow is planning to release a weaponized version of his fear toxin across the entirety of Gotham, subjecting everyone to vivid hallucinations, extreme paranoia, and violent psychosis.  Riddler threatens to kill his hostage, Catwoman, unless you manage to periodically partake in ridiculous puzzle races, while you simultaneously search for about 243 riddles and riddler trophies.  Penguin starts a large scale gun smuggling operation, while Two-Face engages in bank robberies throughout the city.  Firefly seems to have a personal problem with firemen, and thus the arsonist flies around Gotham, burning fire stations to the ground. Deathstroke commands plenty of enemy tanks and forces, is in control of numerous militarized checkpoints throughout Gotham, and is determined to bring down the Bat.  Manbat is on the loose, wings a-flapping and bloodthirsty as ever.  Hush has a bone to pick with Bruce Wayne, as usual.  Azrael wants to prove himself to Batman, but he could have ulterior motives.  Professor Pyg is delusional to believe that he is a surgical artist, but that won’t stop him from carving people to bits.  Harley Quinn wants vengeance for the death of her beloved Mister J.  Poison Ivy seems to want to help Batman, but can she be trusted?  Deacon Blackfire is just nuts.  Mad Hatter has turned himself in to the GCPD, but his plan to make Batman his “Alice” has yet to be revealed.  Mr. Freeze needs help, and his wife Nora has been abducted from his research post.  Ra’s al Ghul has been resurrected, and Killer Croc is back with a bite more ferocious than his…bark.  Woof.  Now, top it all off with the fact that Batman is suffering from toxin-induced schizophrenic auditory/visual hallucinations that cause him to see and hear the Joker almost everywhere he goes.  However, you’re Batman…you can deal with all of that in one night, right?  After all, you’ve got impeccable combat prowess, stealthy predator skills, superior intelligence supported by technologically advanced detective vision, an armored high speed vehicle that transforms into a tank, and skilled allies that occasionally help you out — and a butler that makes you sausage, egg, and cheese sandwiches.

Dealing with all of the aforementioned issues and characters necessitates that you complete a considerable amount of quests in the form of story missions and Most Wanted missions.  You need to complete every single task and mission if you wish to achieve 100% completion Arkham Knight‘s primary game mode — that means every last thing, even all 243 Riddler trophies and riddles.  100% completion entitles you to receive the game’s true final ending.  Additionally, the “Season of Infamy” DLC pack adds new Most Wanted missions that involve Mad Hatter, Killer Croc, Ra’s al Ghul, and Mr. Freeze; this DLC pack adds 20% to the total completion, which means that you can achieve 120% completion in total.  If you do it all over again via New Game Plus, you can achieve 240% completion.  You would be happy to know that Riddler trophies and riddles carry over to NG+.  You would be even more overjoyed to know that all Wayne Tech upgrades to gadgets, combat, Batmobile, and all that jazz also carry over to NG+.  However, know this: engaging in New Game Plus automatically sets the difficulty to Knightmare Mode, which brings big boosts to enemy AI, enemy health, enemy damage, enemy speed, and it removes the Counter indicators that appear above enemies’ heads, so you will no longer be told when to perform a Counter.

Considering the potential fact that Arkham Knight is the most difficult game in the Arkham series, one might perceive the completion of New Game Plus on Knightmare difficulty to be daunting task.  However, if you somehow manage to achieve 240% completion, then you will be rewarded with the special Batsuit v8.05 Prestige Edition, which was recently added in Patch 1.12.

Perhaps a mere cosmetic alteration to the Batsuit is not nearly enough to entice players to strive and struggle to gain the seemingly unattainable 240% game completion.  Frankly I don’t know if I care to achieve it.  All I know is this: I love Batman, I love Arkham Knight, and I love Nolan’s/Bale’s Batsuit as presented in the game.  Rocksteady did a stellar job incorporating the Batsuit and Tumbler from The Dark Knight, and as both a gamer and a dedicated appreciator of The Dark Knight Trilogy, I can easily state that I don’t care about the v8.05 Prestige suit — particularly because I already have the Batsuit I need and want…The Dark Knight suit.

Please enjoy these screenshots of The Dark Knight Batsuit, which I have captured via Arkham Knight‘s Photo Mode: 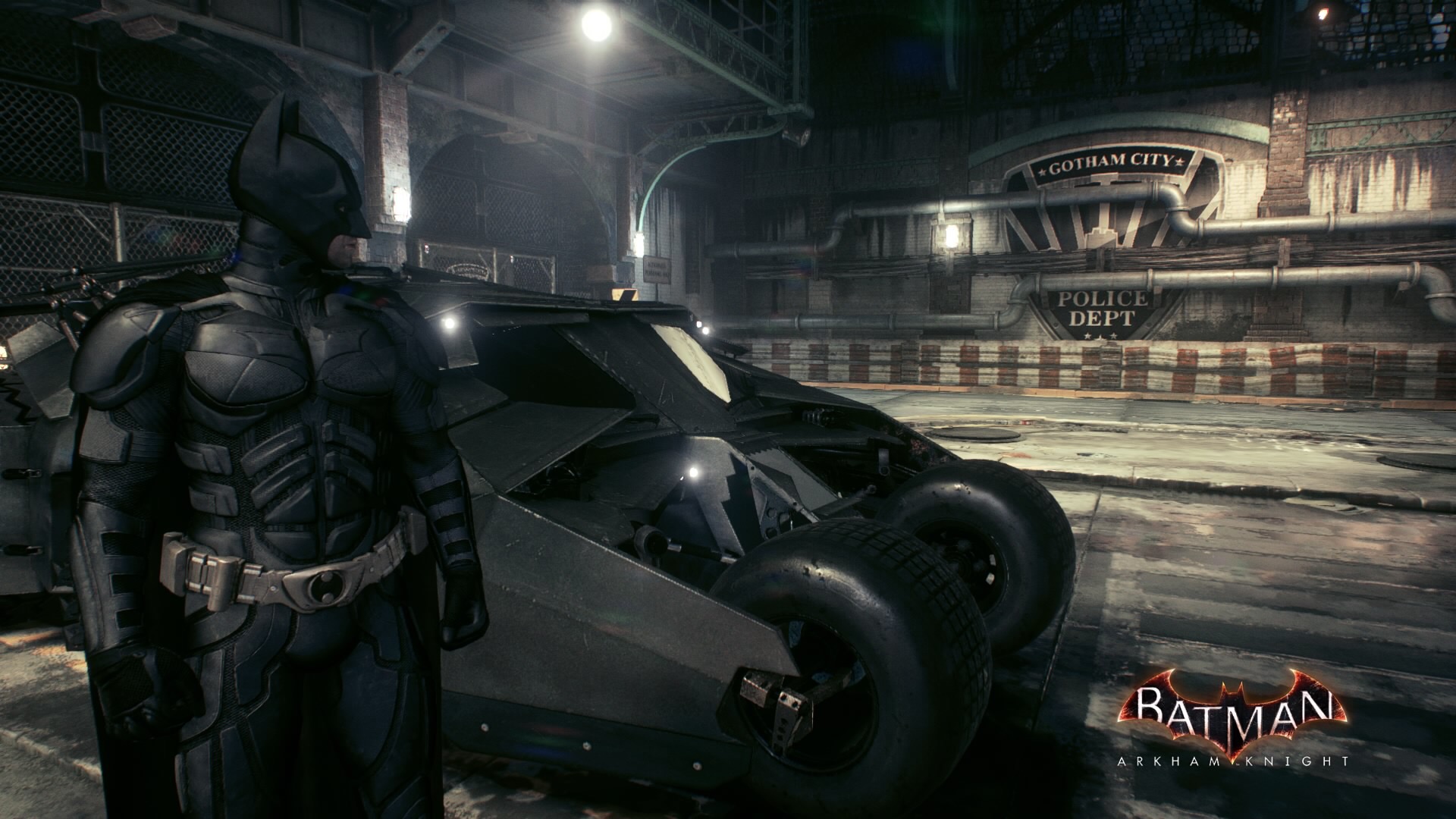 The Bale-Bat just chillin’ by the GCPD. Props to Rocksteady for iconic suit and vehicle skins done right. 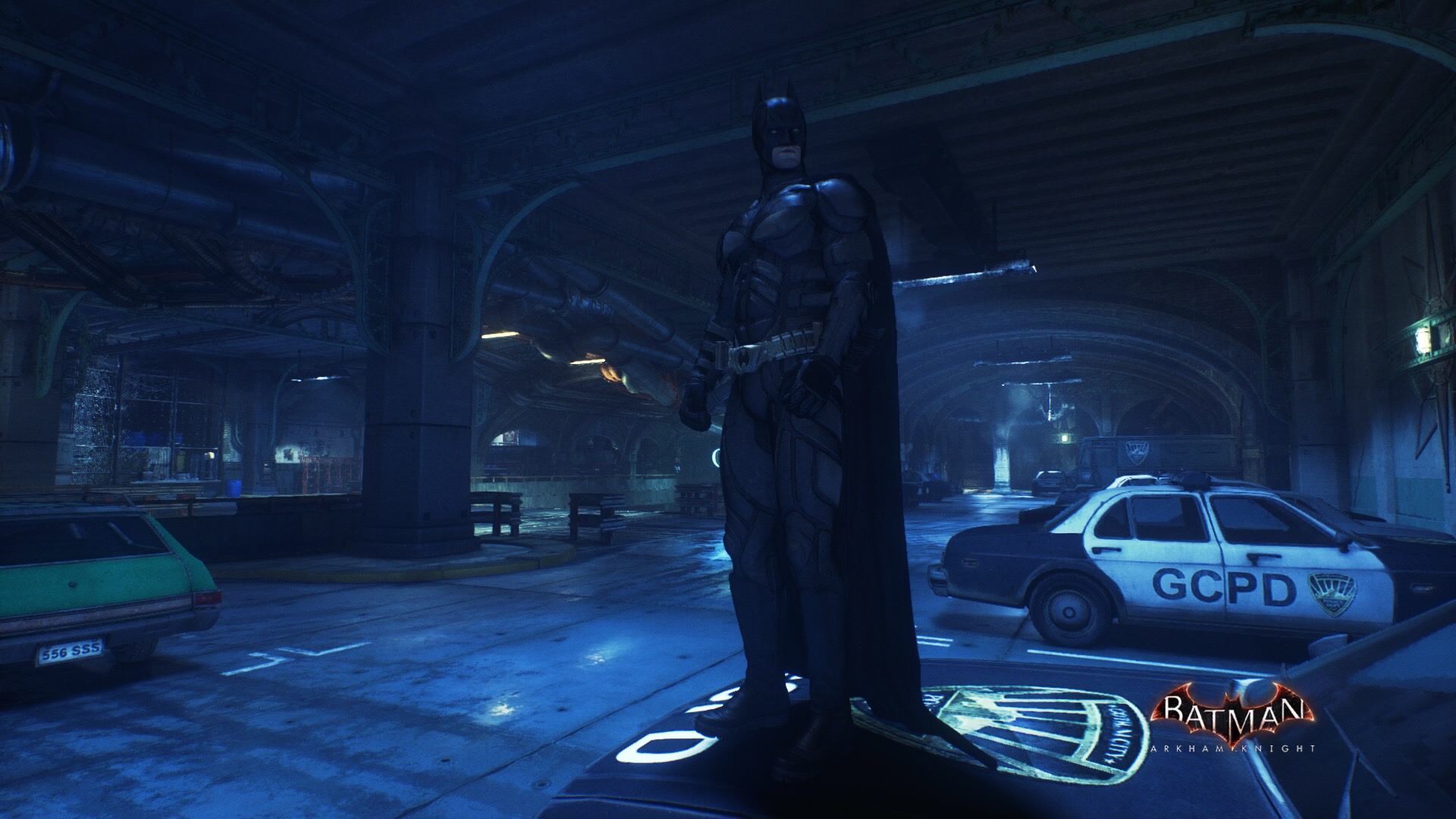 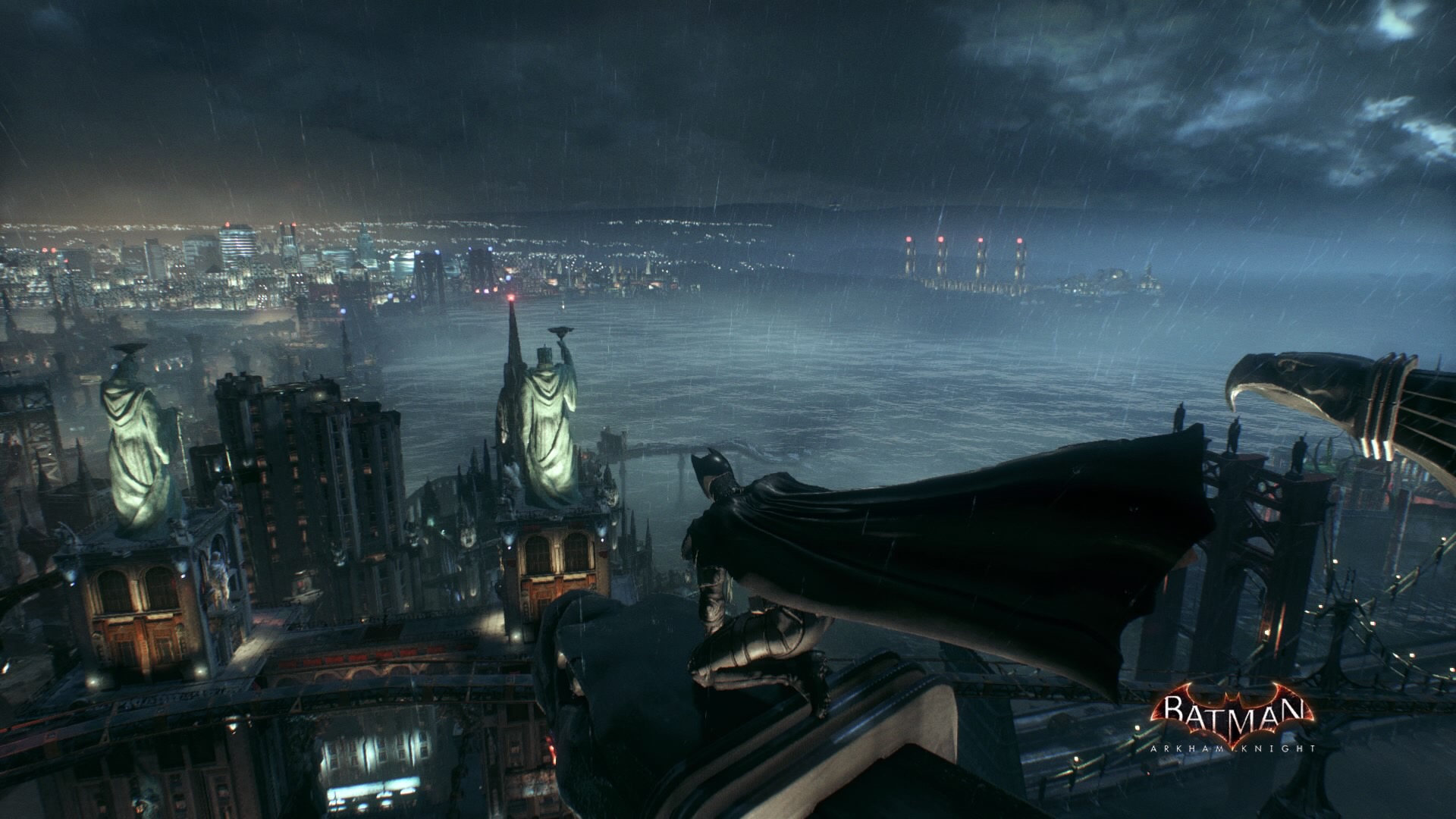 Perched upon Wayne Tower, watching his city, the Dark Knight enjoys the view, and you do, too. 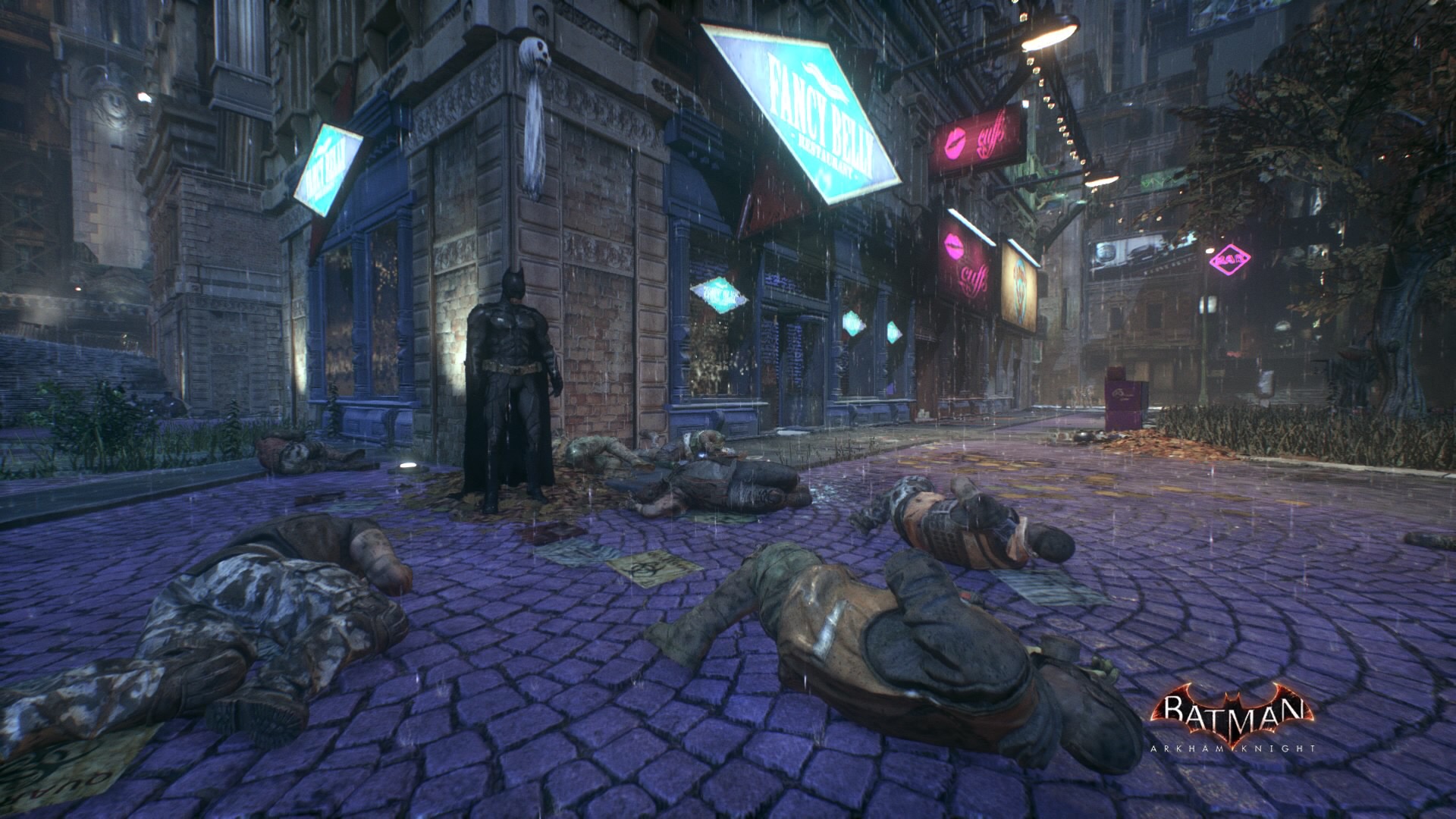 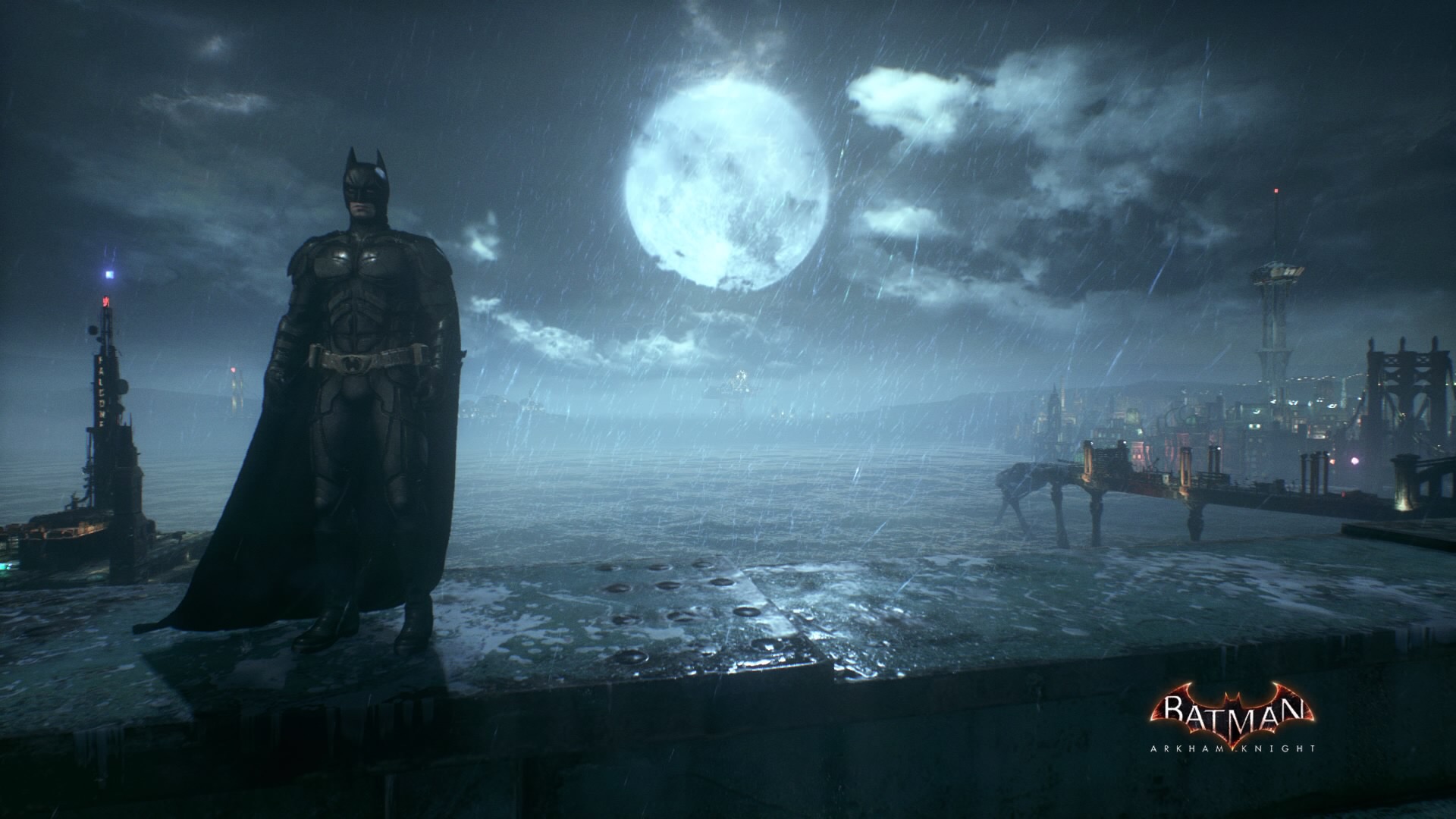 Have you ever stood atop a bridge in the pale moonlight?

Indeed, we wish you a Merry Christmas, Happy Hanukkah, and pleasant every single other holiday you may or may not celebrate.  If you’re alone this holiday season, pick up Arkham Knight, and make friends with the Batman.  He will be waiting.