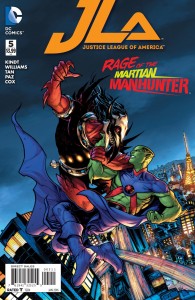 Your eyes aren’t deceiving you. Bryan Hitch is not involved with this issue, but fear not because he and his “Rao” storyline will return with issue #6.

In the meantime, we’re treated to an interim issue that ties into the Martian Manhunter series. It’s kind of funny that I’m reviewing this interim issue as our usual JLA reviewer, my esteemed colleague John Hagmann, has the week off. Yes, the interim issue has an interim reviewer.

Anyway, this issue is a treat for those who enjoy tales centered on the Manhunter from Mars. It’s a very introspective tale that shows how he grapples with tough moral decisions but does so for the greater good. He’s kind of like Dr. Manhattan, only with a more positive outlook on life. I always liked how J’onn was an outsider yet someone you could emulate.

This story also sees him track Thoth (a character introduced in the previous Justice League of America series) to Japan and finally get his hands on the vile beast. It’s kind of odd that the villain is bestowed with a new name, “The UnNamed,” before seemingly meeting his end. I guess we’ll just have to keep our eyes affixed to the solo Martian Manhunter series.

I can say with confidence that any fan can pick up this book, enjoy it, and not feel lost in the slightest. You need not have previously read an issue of JLA or Martian Manhunter. If you’re a fan of my favorite Martian and happen to have a few extra bucks in your pocket while visiting your local comic shop this week, feel free to pick up this baby.