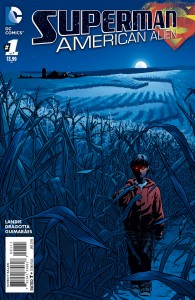 Superman’s origin has certainly had its share of retellings in the past decade or so. The comic book medium alone has seen the likes of Birthright, Secret Origin, Grant Morrison’s run on Action Comics, and the Earth One line of graphic novels, not to mention live action offerings such as Smallville and Man of Steel.

The question presented is this: can a fresh take on Superman’s origin possibly be executed after so many varied outings?

The answer is yes.

Screenwriter Max Landis (Chronicle, American Ultra) has an incredible love for Superman that is apparent in every panel of this book. I was sold on this mini-series before knowing the specifics of the story and just basing my opinion on his enthusiasm for the character that he displays in interviews. 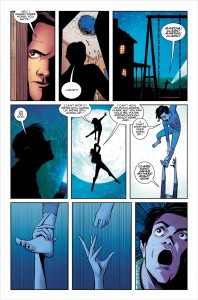 This inaugural issue offers a surprisingly fresh take on Clark Kent’s early years. And make no mistake, this is most assuredly a CLARK KENT story through and through. It seems that Landis wants to focus on the “Man” in “Man of Steel,” with this learning to fly tale. Many writers have had their way of exploring young Clark adjusting to his powers and luckily Landis has offered a new perspective. We all know that Superman is who he is because of Jonathan and Martha Kent, an idea that certainly isn’t lost here.

The story is brilliantly brought to life by artist Nick Dragotta, who seems to have a rather manga influenced style. It seems quite perfect for this particular chapter. Just know that each issue of this seven issue mini-series will be drawn by a different artist. The goal is to have each artist give their own perspective on a different point in time in Clark’s life, which should make for an entertaining reading experience.

The final two pages offer a glimpse at the Kents that is quite cryptic. I’m not quite sure what to make of it. Will this version of Clark Kent have a radically different family life than what we’re used to seeing? I guess we will have to stay tuned.

Any Superman fan with a few extra bucks in their pocket is well advised to pick up this issue. Trust me, this really does seem like the beginning of the next definitive Superman story.

Find Out How YOU Can Chat With Frank Miller About ‘The Dark Knight III: The Master Race’