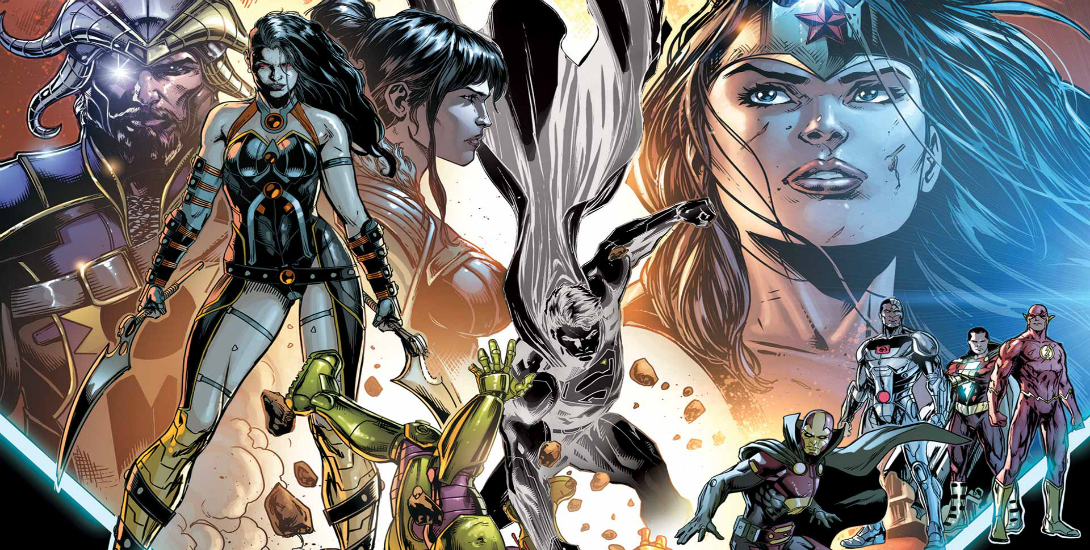 The Darkseid War rages on as the Justice League looks onward on the sidelines. What will the league do when the unthinkable happens and one of these titans falls by the hands of an unforeseen player? Elsewhere, ‘Nega’ Superman and Lex Luthor are at each others throats again, but in a way we’ve never seen, and Batman and Green Lantern unsolve the eternal mystery as to who the Anti-Monitor really is.

I’m in a really difficult situation. If you care to look at my past reviews of Justice League, one can gather that I’m a fan of the series. My difficult situation is that I feel like I should be a fair reviewer, and not just give ‘9’s’ and ‘8’s’ to every issue, but I just can’t find it in myself to not give each issue a super high score. Issue after issue, this series continues to be one of the best written and drawn comics on the market and #44 is no exception.

Plain and simple, this issue, as well as this story arch, is just a mushy love letter to Jack Kirby. A love letter that I’m overly happy exists and can’t stop reading. As the two gods fight in the foreground, the Justice League, led by Wonder Woman currently, clings to everything they hold dear as they feel as powerless as ever. A new player joins the fray as The Black Racer, another awesome Kirby creation, makes his New 52 (or DCYou) debut and is quickly given an incredibly fun and inventive twist that will make the League different for the foreseeable future. The whole issue culminates to the death of one of these two titans, and we learn that a certain Anti-Life Equation is now flowing through the veins of one of our main antagonists.

This issue has been one of, if not the best, issue of the series thus far. I remain in my stead that Fabok is the best current DC artist out there and his art in this issue is top-notch. It would be easy for this story to get lost in the fray between the various other arcs that are concurrently going at the same time, but everything is crisp, clean, and perfectly understandable through the whole ordeal. I cannot recommend this title, or this issue enough.