Harlequin appears in Batman ’66 #24, expanding its world to include modern day rogues! For the first time, a villain not previously appearing on-screen in the 1966-68 television series appears in a printed issue of Batman ’66 (Note: Batman ’66 did publish a terrific One-Shot titled, “The Lost Episode,” featuring Two-Face — but, was not part of the ongoing series).

While Harlequin appears in Batman ’66 for the first time, it is not the first we have seen of Dr. Holly Quinn in the series. She first appeared as the newly arrived psychiatric specialist at Arkham Institute’s Deep Security Ward in Issue #7 (printed). When last seen (Issue #11, printed), Dr. Quinn is manipulated by Catwoman and Joker to perfect the Joker Wave — a hysteria-inducing device used on Gotham. Quinn is visibly devastated by her role in the plot. To atone for her mistake, Dr. Quinn reverses the device by submitting herself to its effects — freeing the people of Gotham, but sacrificing her sanity in the process. 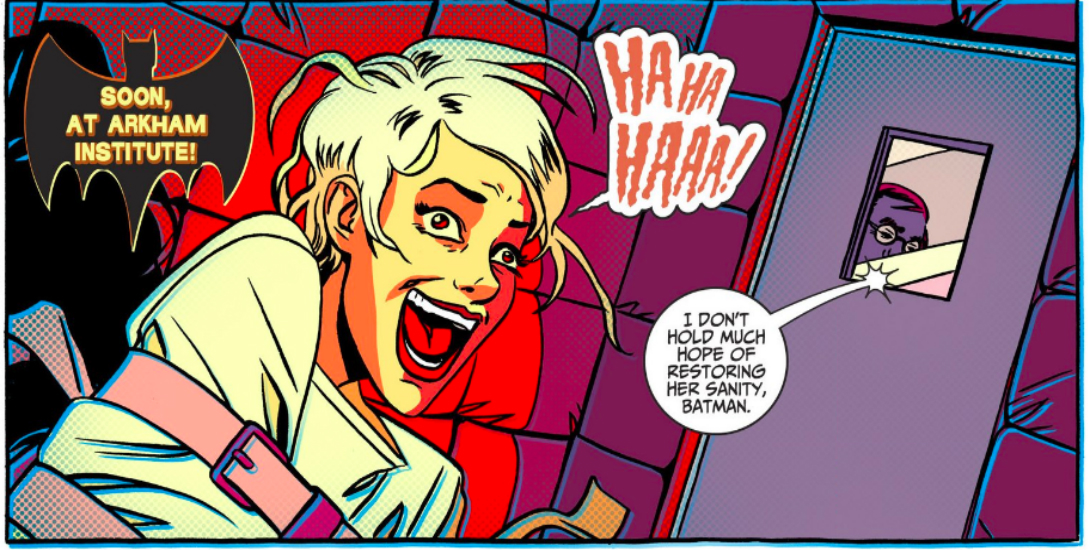 Here in #24, Quinn has escaped treatment at the Arkham Institute and soon introduces herself as Harlequin. What separates this origin story from others is that Harlequin is not simply defined by her infatuation with Joker, but by severe brain trauma. She retains her considerable intelligence and psychological training, which combined with her psychosis, makes Harlequin a formidable foe. However, this does not keep her from an uneventful capture by the Dynamic Duo. When captured, Harlequin seems more concerned with how she stacks up against Gotham’s other rogues.

The second half of the issue is a short spoof of Mad Men, called “Bad Men.” Barbara Gordon is a first-day temp serving at FKR&D Advertising. Catwoman, Joker, Penguin and Riddler burst in demanding a rebrand! Gordon volunteers to help, and when the rogues reach an impasse, she slyly tags Penguin as the “natural leader” of the rogues. This, of course, sets off a four-way battle of ego and gives Barbara cause to call the authorities, who escort the unruly intruders away in cuffs.

The issue itself is enjoyable. Readers get two complete, though overly simplistic stories. The art is colorful and fun, exuding the campy ethos of the ’60s. Still, issue #24 is a disappointing introduction to Harlequin, cut short by an unnecessary and secondary story. The foreshadowing of past issues provided a tremendous set up for Harlequin, which was sadly rushed here in her debut. A full issue with more development of Harlequin as a villain would have been preferable.

1966 Batman purists will no doubt be concerned with expansion outside television canon. Expansion within the Batman ’66 comic series, however, was inevitable. In three seasons, television’s Batman only faced 33 villains. Expansion into Batman’s rogues gallery is how Batman ’66 can evolve — and that’s a good thing. Digital readers know we will be seeing more rogues given the Batman ’66 treatment soon.  I believe this will enhance and enlarge interest in this series and thus keep the style and sensibilities of the 1960’s Batman alive.

“Night of the Harlequin” credits: