Synopsis: The epic Bat-story over a year in the making comes to a stunning end! Gotham City is in flames! Villains are running wild in the streets! Bat-tech has been corrupted! And the mastermind behind it all has put a knife in Batman’s ribs! How will the Dark Knight put an end to this nightmare…and how will it shape the face of Gotham City to come? 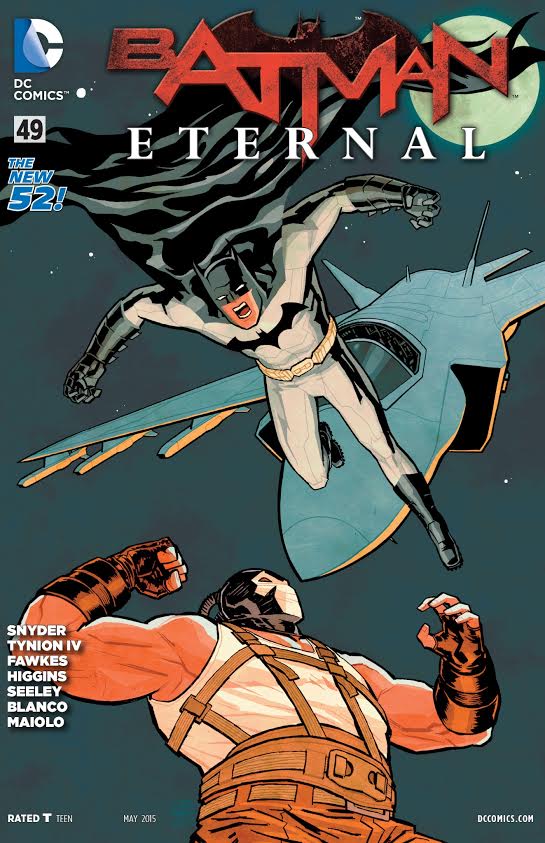 With just four issues to go, Batman:Eternal is going full throttle. In less than a month, this year-long epic will finally come to an end and the questions from that shocking debut page will be answered.

With this week’s issue #49, we inch ever so slightly  toward those answers. Hush has gotten loose inside the cave, the family are taking on some of Batman’s deadliest foes, Gordon is in the middle of a Blackgate riot, and the Dark Knight himself steals from the army. That’s only scratching the surface of this issue. We have a lot of story that may(?) be wrapping up, albeit slowly. Don’t get me wrong, nothing about this issue even flirts with slow. There’s plenty of dialogue blended nicely with plenty of action. We are mostly cutting between the bat cave (dialogue) and the family (action), Bard and Mayor Hady (dialogue) and Blackgate (action). Oh, Batman and Julia are also rebounding from their mighty falls.

Though I’m not as certain about us getting answers, everything moves along nicely. The Dark Knight is back in town, ready to kick some ass before his almost certain downfall. My guess is we’ll get that the next week, then Batman in peril, with our final issue having the Dark Knight rising one last time.

Kyle Higgins handled scripting duties this week, as he has for a large portion of this title. He does a great job and hits every character on the nose, with perfect pacing overall. Fernando Blanco does a wonderful job with the doodle. I’ve always said this about Eternal because it’s always been true: they never fail in the art department. A number of the artists, whom I’ve never heard of, attack each issue with beauty, putting them on my radar for future books.

Issue #49 surprisingly ends with an image much like the cover, leaving me impatient to see another Batman vs. Bane battle. This one won’t be as epic as previous fights I’m sure, but action awaits us all. I can’t wait.