Gotham aired its midseason premiere this week, and is taking the holiday season off before returning January 5 of 2015 with 12 more episodes to wrap the first season. The show, which premiered with a sizzle instead of a bang…. and is taking a break the same way. Don’t get me wrong, the show is fine and had a lot going on, but just didn’t end with that “WHAT?!” that I was hoping.

First off, the episode is called “Lovecraft”, but unfortunately we don’t see the guy that much. Sure, he’s mentioned… and is the whole reason for the opening scene… but he doesn’t make it through much of the episode. Also, Oswald (Penguin) Cobblepot doesn’t get to do much on screen (but owns every second), other than tease what’s coming. Finally, Gordon doesn’t get to do too much except look for Bruce Wayne, who has gone missing with Selina Kyle. Oh, excuse me I mean “Cat.” There’s plenty of talk, yet not too much action in any one of these stories, which I am not too fond of… yet not too bothered by it either. Why? Well there’s plenty of good in this episode too. 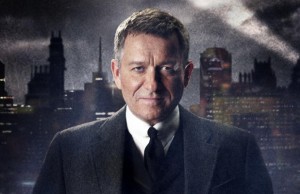 Alfred!!! FINALLY I am on board with this guy. As I wrote in my review of the first episode, I wasn’t exactly a fan of this interpretation of the legendary character. He’s a little too hard-assed for my liking, yet the past few weeks he has grown on me. After he shows off in “Lovecraft”, I’m an Alfred fan! Finally getting to show off his training was exciting, fun and just overall entertaining.

I also really enjoyed Bruce getting to venture outside of Wayne Manor and going deep into Gotham City. Cat *cough Selina cough* bothers me but the future Dark Knight is growing on me too. Maybe it’s due to who he’s being raised by…

Anyways, the episode did end on an interesting note, and has me sort of anxious to see where the creators go with it. I just feel like the show could have really ended with an “Umph”, ala The Walking Dead. But oh well, not a bad first half for a show that seemed to have unreachable expectations.

Catwoman #36 is Available — Check the Preview