Synopsis:“Endgame,” part 2 – it’s a story arc so steeped in mystery, all we can tell you is the title! 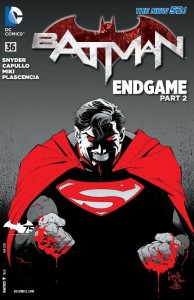 The comic book world was all a buzz last month after that final reveal in Batman #35… the Joker is back! You have to give it to DC, they kept all of this under wraps in an age where companies are giving up spoilers in hopes of selling more of their product. Instead, we got to enjoy the “WTF?!!” moment as the creators intended. Well done DC!

So, where do we go from here? The Justice League is recovering from the Clown Prince of Crime’s attack, and Batman has no leads on his whereabouts. This takes us to the maddest place in town, Arkham. The asylum is closed now, but the Dark Knight travels there anyway.

Speaking of, do you remember Eric Border who made his debut back in Batman Annual #2? 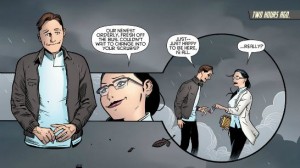 I didn’t either. Anyway, he shows up just as Batman is investigating the cell that usually holds his arch nemesis. Then the cell doors shut, makeup is wiped and the truth is revealed… 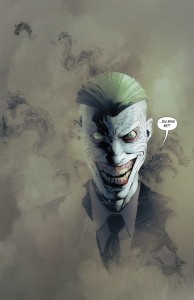 With that, we are left on edge until next month. Two issues, two Joker reveals, two excited expressions on THIS guy’s face. This is why people love Scott Snyder and Greg Capullo. The team is just incredible. Storytelling, not just comic book, at its best. The art is top-notch, as always, and I can’t name a better writer . I don’t like guessing what’s going to happen, but I’d be surprised if ANYONE had a clue where this story is going. It’s called Endgame for a reason. Is this the final battle between Batman and the Joker? Is it the end of Alfred? The Justice League? GOTHAM?!

Has this team delivered a bad issue yet? Negative. Do yourself a favor and just buy this issue, strap in and enjoy the ride. We are in for another special story from two guys that redefine awesome.