Synopsis: The Spoiler is on the case to find the truth behind the nightmare at Arkham! 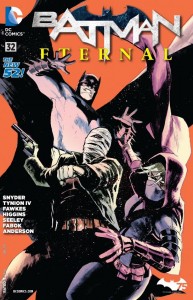 Batman:Eternal kicks it into high gear this week, with one REALLY good issue. I know the description says Spoiler, and yes she’s in it, but this is a Hush issue.

Batman’s longtime friend/sort of recent nemesis just about does a number on Spoiler, gives up secret documents for Commissioner Bard to spread to the media and ends up in a secret Bat-layer by issue’s end. This is the biggest threat Mr. Elliot has posed to the Dark Knight since his introduction in…. well, Hush.

I just wrapped up this issue in two long sentences, but a lot goes on in this issue. Credit the perfect flow to Kyle Higgins, who appropriately titles this issue “Whisper Campaign.” As if that isn’t enough, we get the wonderful Jason Fabok doing the doodles. Seriously, this guy is flawless!

Eternal continues to be a (mostly) bankable run and this week ends on a great note. HOPEFULLY, it picks up right where it left off in the next issue.