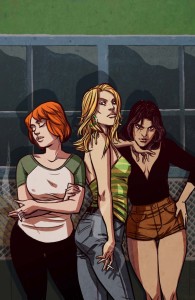 THE KITCHEN #1 by Ollie Masters and Ming Doyle

This is 8 issue series from Vertigo is one that I have looked forward to since its announcement and it certainly lives up to the hype. In short, this book takes place in 1970s Hell’s Kitchen and follows three mob wives who have just seen their husbands get sent off to prison. Instead of getting reality shows, they take it upon themselves to pick up the slack and take charge of the family business.

Make no mistake, this is for mature readers. There’s some graphic violence and colorful language throughout. Let’s just say the author MASTERS this particular brand of storytelling. This inaugural issue is mostly laying groundwork and shows massive potential. Ming Doyle is also the perfect fit to handle the artistic duties.

To help make this book appeal to Batman fans, I’ll say this: fans of Gotham’s Fish Mooney will certainly love the character of Kath. They’re not identical, but you’ll see why I draw the comparison once you read this. She’s really the alpha of the trio. This concept would also make for a good television series on a network like FX. Batman fans looking for a gritty series without capes should take note. Score: 8/10 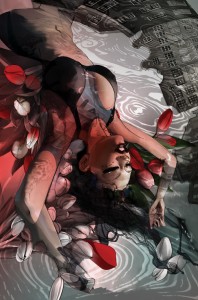 THE NAMES #3 by Peter Milligan and Leandro Fernandez

I unfortunately missed out on the first two issues of this series, so I’ll discuss this issue (3 of 9) as best I can. We join Katya Walker as she’s already waist deep in trying to prove that her husband’s death was no suicide. Vertigo described this mature book as “The Wolf of Wall Street meets Kill Bill” and I’d say that’s fairly accurate.

Peter Milligan has crafted an intelligently written conspiracy thriller that features grounded, believable characters that are rather unique. Katya’s stepson is a standout. I also found myself really enjoying Leandro Fernandez’s art, perhaps because it somewhat reminded me of Eduardo Risso’s.

I was able to enjoy the major beats of this book, though some of the finer points escaped my grasp. Although I highly recommend this book, I urge you to pick up the first two issues before jumping into this one. I’d probably score this higher had I been caught up, but I’m awarding it with one that’s not too shabby, regardless. Score: 8.5/10