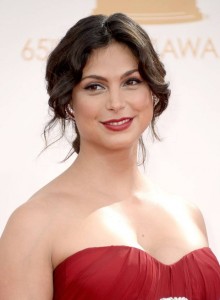 Another significant supporting character in the Batman mythos has been added to the hit new show Gotham. Morena Baccarin (Homeland) has been cast as Dr. Leslie Thompkins. Fans of the comics and cartoons will no doubt remember this character as a valuable ally to both Bruce Wayne and Batman.

Deadline describes the character as “a gifted and dedicated physician who was a friend of Bruce Wayne’s parents, Thomas and Martha. She is determined to use her skills to aid Gotham’s most in need, which currently means working at the newly opened Arkham Asylum’s Home for the Criminally Insane. In addition to her medical skills, her coolness under pressure will serve her well as she finds herself drawn close to James Gordon and into more and more dangerous waters.”

The character will have a recurring role this season and will be a series regular in the second season. This isn’t Baccarin’s first foray into the world of Batman. You may remember her as the voice of Talia al Ghul in the animated film Son of Batman.