Description for ‘Gotham’ S1E6: Spirit of the Goat

With each episode of Gotham, I’m finding more and more reasons to tune in on Monday nights. Each episode is getting progressively better and you can see everyone, actors and writers, get more and more comfortable with their world. With each episode, we are treated to slightly more of several overarching stories while Bullock and Gordon deal with new cases. However, as it is the case with some shows, holidays supersede the story arcs for a small, self-contained story to match the mood of the holiday. It looks like Gotham is no exception. Check out the spooky description to Episode 6, “Spirit of the Goat,” to be aired on October 27th.

A FAMILIAR VILLAIN RETURNS TO GOTHAM CITY ON AN ALL-NEW “GOTHAM” MONDAY, OCTOBER 27, ON FOX

When a killer begins targeting the first born of Gotham’s elite, Bullock is forced to confront traumatic memories from a nearly identical case he worked in the past. Later, Gordon is confronted by past decisions in the all-new “Spirit of the Goat” episode of GOTHAM airing Monday, Oct. 27 (8:00-9:00 PM ET/PT) on FOX. (GTH-106) (TV-14 D, L, V) 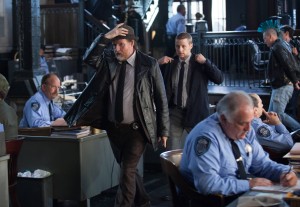 Then again, there’s also a strong possibility that the description simply didn’t mention any advancement in the arc… because why would it? Either way, it looks like Halloween is on the horizon and Gotham intends to celebrate it.

Regardless, I’m a little excited that Oswald’s mom, Gertrud will be returning. She was very eerie and though she was seen briefly in episode 2, I enjoyed her character.

This Week on the ‘BvS’ Set: ‘BvS’ Getting Schooled?