For everyone that has been excited about the new redesign of  Batgirl coming October 24 in the Batgirl #36 issue, then you might like to hear what writers Brenden Fletcher, Cameron Stewart and newcomer to comics, artist Babs Tarr, had to say in an interview they had with CBR.

When asked if they were excited by positive fan reaction to the new look and direction: 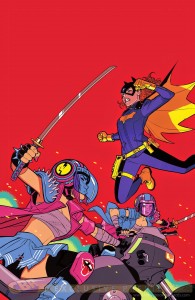 Cameron Stewart: Absolutely. We’ve always been confident that what we were doing was good and was going to be received well, but we didn’t know it was going to catch on quite so hugely. It’s great. More than anything, it’s just really vindicating and a really strong confirmation that what we’re doing is good and the right choice.

Babs Tarr: Having no comic experience and have never launched a title, I was really not sure what was going to happen, and all of my friends in the comic book industry told me this is a really crazy response. This is not how it’s supposed to happen. This is not how it usually goes down. It’s been pretty cool.

As to what villains we can expect:

Stewart: It’s going to be all new villains. Part of the fun of this book was taking Batgirl out of Gotham and leaving everything behind — and everything negative that comes with [Gotham], including the typical Batgirl villains. We wanted to have villains that erupted as a result of her new environment.

Fletcher: We wanted Batgirl to have her own set of villains. She is always just going to be a shadow of Batman if all she can ever do is fight Batman’s villains. We really feel strongly about providing her with her own supporting cast and her own villains.

Stewart: As for the twins, I don’t want to say too much about them other than that they are tied to Barbara’s past in an unusual way. If we give too much more than that, we’ll spoil the story. But they are twin sisters on motorcycles that are influenced and inspired by anime. Their costume design was another jam between Babs and I. It was another interesting hybrid by the two of us.

Tarr: That was fun.

On what kind of continuity we can expect from Gail Simone’s run:

Fletcher: It’s the same character. We just have the character taking the logical next step in her life. It should feel like it’s a continuation of Gail’s run in a way, but it’s a new day for [Barbara]. It’s like when Cameron moved to Berlin, or when I moved to Montreal. I moved to a new city, and I had some of my same friends here, but my circumstances were a little bit different and the way I lived my life was a little bit different — but I didn’t change.

Stewart: Part of the point of moving away, when I did it, twice in fact, was to find new friends and new experiences in a new environment and to see how I would develop in a new way. That doesn’t necessarily mean that you leave all of those people in the past and never talk to them again. It just means you’re taking a bit of a different direction.

Like Brenden says, we’re continuing on. We’re not ignoring what Gail has done, but we’re building on top of it. Creatively, I think Brenden, Babs and I want to do our own thing. That’s one of the interesting things in comics — with these long-running characters, different creative teams are able to do their own things with their version of the character and not necessarily just repeat what’s come before. I don’t think anyone, least of all me, has any real interest in singing a cover song. We want to play our own instruments and play something new. We hope it’s consistent with what people love about Batgirl but is something different and new and our own thing.

I’m very happy to see Barbara Gordon aka Batgirl getting new blood finally. Are you looking forward to seeing Batgirl #36? The story with CBR continues on for quite a long time. To read more about this interview head over to the source.