Synopsis: The second chapter of “ZERO YEAR – SAVAGE CITY” reveals an entirely new Gotham City. Unraveling the mysteries set forth by the Riddler, Batman must learn to work with his new ally, Lieutenant Jim Gordon, and do whatever it takes to survive!

This is my fifth review for the Batman title and fortunately for me, every review has been over “Zero Year.” I feel like I’m being repetitive though. “Snyder’s incredible”, “Capullo’s art is fantastic”, “Batman is still kicking ass.” I mean, what more can I say? If you haven’t read “ZY”, get on board. And if you have, don’t stop now!

As always, here are a few things to look out for in this issue:

Here are a few teases for you. 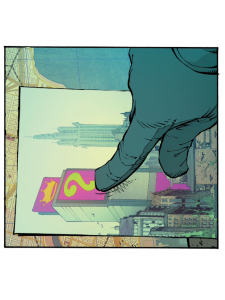 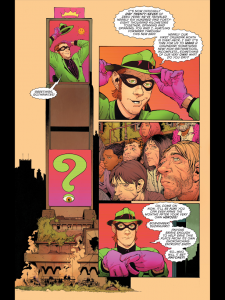 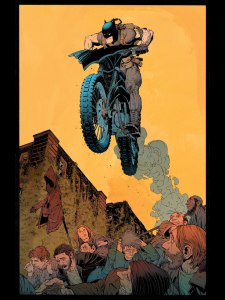 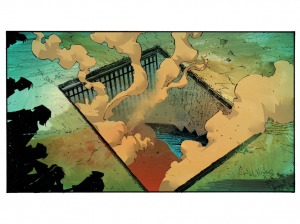 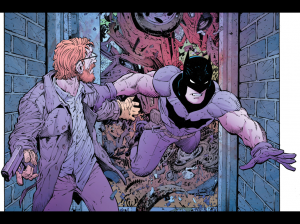 Snyder’s on his game. This issue went a different route than what we’ve seen thus far, and I’m not complaining. There seemed to be less action than before (despite the battle with the… well, you know), but we the story moved along just as much, if not more. I’ve been wondering if/when Batman would challenge the Riddler, and what that riddle would be. And Nygma’s answer? Spot on!

I also love these little flashbacks and this issue’s seemed about the same time we saw a few months ago, where Bruce snuck into Julie Madison’s dorm (he saw HER bleeding too!).

I will admit that I wasn’t giddy over Capullo’s art… at first. It’s not that I wasn’t a fan, I just wasn’t wild. I can say passionately now, it will be a sad day when these two aren’t working on Batman together. I’m sure plenty of people have spotted flaws in his work, but I haven’t. He’s nailing it!

There are two issues left of this story. Did you really think THIS would be the one that I didn’t recommend? Please.