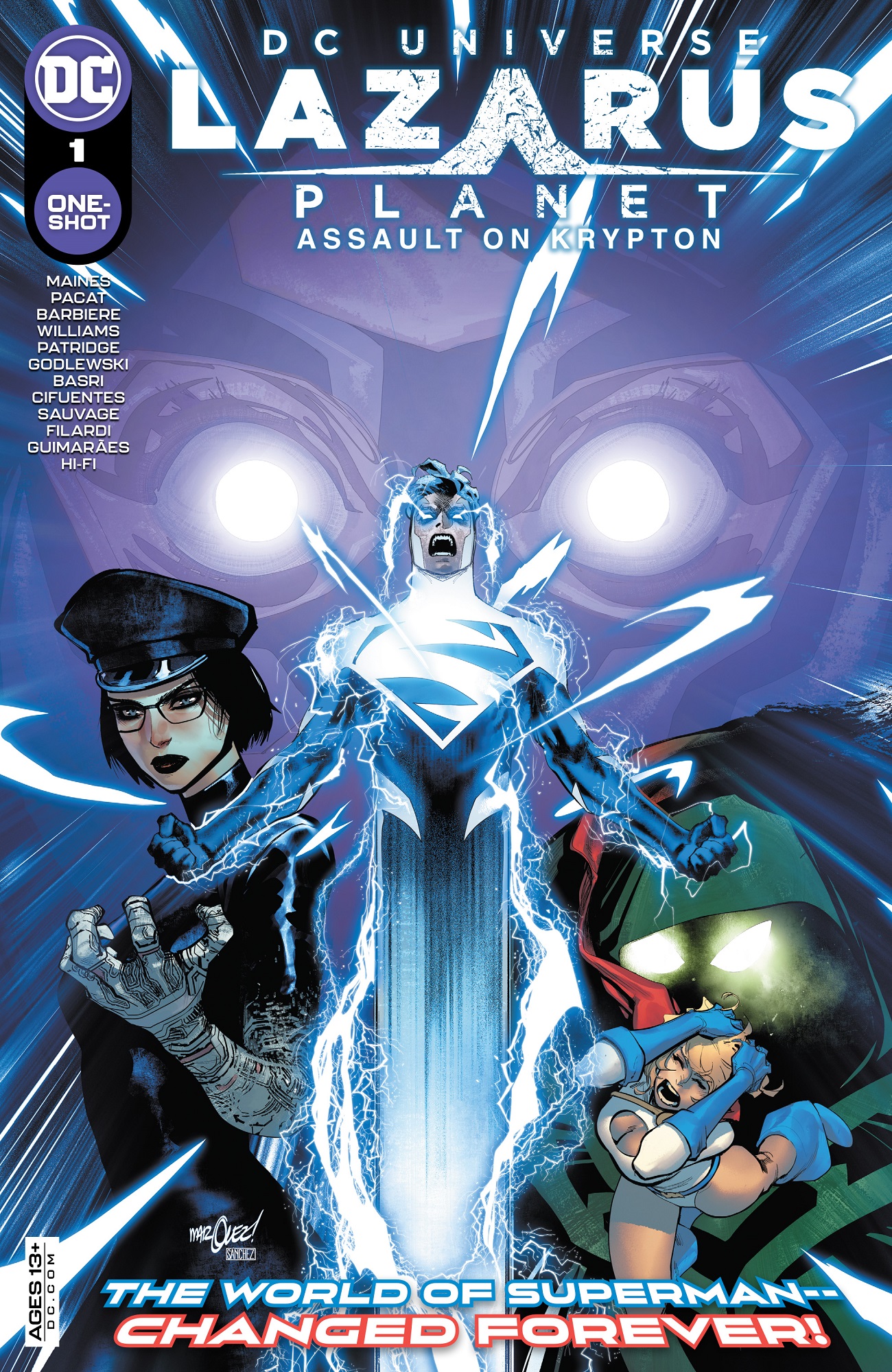 Lazarus Planet continues with its second one-shot, Lazarus Planet: Assault on Krypton, and as the title tells you without much doubt, these stories center around the Kryptonian and Kryptonian-adjacent elements of the DCU. We’ve got stories about Dreamer, Mercy Graves, Jon Kent Superman, and Power Girl.

Slowly, slowly, one at a time…

Can we just talk about Nicole Maines for a minute?

Not satisfied with simply playing Dreamer the CW Supergirl show, Nicole has brought this wonderful new hero to the comics page in a spectacular fashion. Starting with the DC Pride 2022 anthology, and then Superman Son of Kal-El along the way, Assault on Krypton marks her third appearance in the DCU, and she has her own graphic novel well on the way. Dreamer’s obviously a landmark character for DC, being the first transgender superhero to appear in a TV adaptation and one of a tiny group in the comics. Seeing her flourish on the pages after the show’s end has been an absolute pleasure to see. Nicole Maines has stepped up to bat for her character and has put in the work to make Dreamer something truly special.

This story, Gone Dark, throws Nia Nal straight into the action she was truly unprepared for, becoming an integral part of the heroes’ fight against King Fire Bull. The biggest takeaway from the issue, however, is an actual exploration of Nia’s powers. It’s been pretty vague what she can actually do up to now, as she has been developing new powers since her transition to print, and seeing her use her powers the way she does is unique, to say the least. Makes me feel like she might run into a certain member of The Endless while exploring people’s dreams…

Maines is a great writer for Dreamer, bringing her passion and enthusiasm for the character in a big way, and setting her apart from the rest of the cast. Patridge and Filardi bring some solid artwork to the book, but it really shines when Nia travels through dreams. The panel layouts and colors used in this are brilliant, and the stark contrast between the style for the real world and the one used when Nia’s using her powers is an inspired touch.

Do Superboys Dream of Electric Powers?

Have you been wondering why so many covers for Adventures of Superman #1 are showing Jon Kent as Electric Blue Superman? Wonder no more!

Electric follows Jon trying to do his usual boy-scout routine with the help of a newly-powered man of questionable integrity, Ash, while also dealing with his powers acting strangely. This is a Superman story at its best. We’re given an all-powerful being focusing on the little things, and saving everyone he can during a freak weather incident. Ash’s inclusion as a counter-point to Jon was fun as well, giving a different perspective to being a superhero, and what it all actually means.

C.S. Pacat does a great job of distilling the essence of Superman down, showing everyone just how much of his father’s son Jon is. This isn’t just what he does, Jon cares so this is what he is. The fact he goes out of his way to help Ash find the right path, even with him off his game, gives fans everything a Superman story should be.

It’s always nice to see Scott Godlewski drawing Jon or any of the Super-Family. Alex Guimarães’ colors just make this feel like another chapter of Superman Son of Kal-El, which is by no means a bad thing. I’m excited to see where Jon goes next with this, I really am.

In Breakthrough, Lex Luthor’s long-suffering bodyguard, Mercy Graves, must deal with a situation at Lexcorp while still keeping her employer safe. Seems like every day for Mercy, right? Well… no. It’s not every day that there are giant dogs running around making mincemeat out of your security team.

I love little macro-focused stories like this, showing you one tiny piece of the whole picture to give perspective on the event, while still making it an entertaining story in itself. This isn’t just showing readers the Lazarus storms and how the heroes deal with them but giving us the consequences of the event. That’s what really compels me.

Frank Barbiere had the challenge of taking on a character that not a lot of people know anything about and making you care about them, in just a few pages. Luckily, he met the challenge head-on and delivered an impactful story that acts as an early preview to the new Superman’s upcoming title. Together with artists Sami Basri, Vicente Cifuentes, and colorist Hi-Fi, they’ve given a preview of the new Superman book that will get people very excited for what’s to come.

Power Girl is such an interesting character to me. She’s the survivor of two Crisis events and her whole universe being destroyed, a long-standing member of the Justice Society of America, and someone who sees herself as the outsider of the Super-Family. She’s never had it easy. She’s always had to do things independently and fend for herself. She feels truly alone in this universe, because, technically, she is.

Dues Ex Magika feels like it was written for me. It appeals to all these elements of her character, attempting to break her down and make her weak. As she tumbles to what she thinks is her death, she sees all of her failings, all of her mistakes thrown at her. They forgot one thing, though. Never put Power Girl in a corner.

Leah Williams rarely disappoints and coupled with artist Marguerite Sauvage they deliver a beautifully illustrated emotional story that’s not just for Karen Starr fans, but for people who don’t even know who she is. This is a wonderful introduction to Power Girl for new readers, and what lies ahead for her was long overdue. We haven’t had any excellent PG content in a while (not since Mark Russell and Steve Leiber’s excellent One-Star Squadron), and this is certainly all that and more.

We’ve all been aware for a while that the Superman titles (Action Comics, Superman, and Adventures of Superman) were heading for a massive overhaul. Lazarus Planet: Assault on Krypton introduces you to a few of those new concepts, telling some stylish stories within the confines of the Lazarus Planet event while giving context to some of DC’s upcoming Super-Stories. This book’s a definite must-buy!

Check out my review for Lazarus Planet: Alpha here!