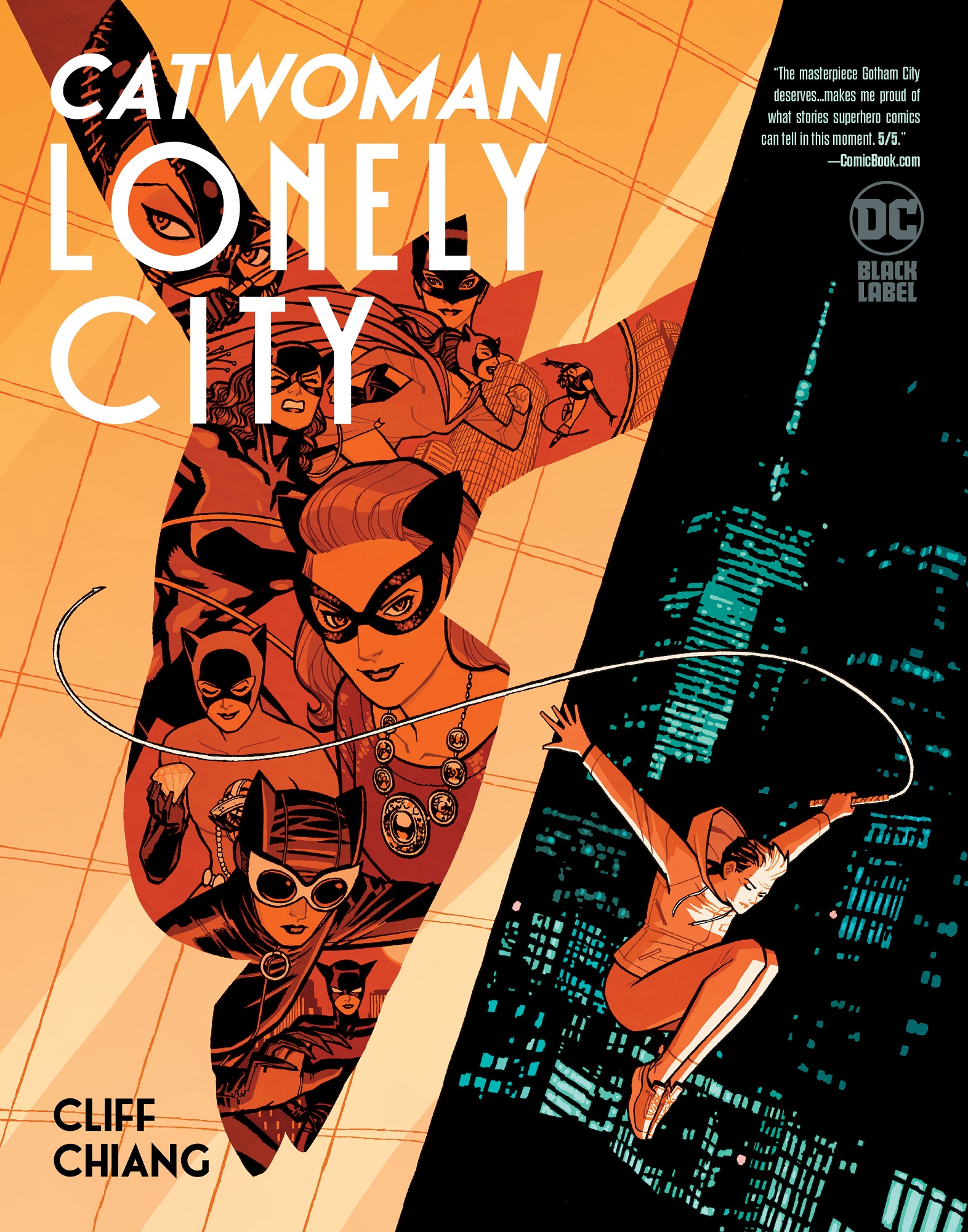 Catwoman Lonely City is the passion project of one man, and one man alone; Cliff Chiang.

Chiang has always been on my radar in some way or another. Between his excellent stint on Wonder Woman, with Brian Azzarello, and Paper Girls, with Brian K Vaughan, he has a great reputation in the comics world. This book? This book just solidifies why.

The Cat After The Bat

We pick up ten years after Fool’s Night, a date that saw the loss of Batman, Nightwing, Jim Gordon and The Joker. It’s also the night that sent Catwoman to prison.

We follow Selina as she’s released, trying to pick up the loose ends of her old life, while realizing that she has no choice but to build a new one. A decade has passed, and Gotham isn’t exactly the same dirty city it used to be. Now it’s a dystopian police state, under the watchful eye of a very surprising Mayor. Crime rates are down, so everything’s alright, right, guys?

It won’t be easy, but Selina will have to leave Catwoman behind, and start anew. Of course, that doesn’t necessarily mean she’s leaving it ALL behind…

With the help of some old friends, Selina seeks to finish a mission that Bruce gave her with his dying breath; find Orpheus. If she then also just happens to bring down a totalitarian regime while doing it, where’s the harm?

The Man Behind The Mask

This is a superbly written book. The dystopian feeling running throughout; between there being a new pay system which Selina has no access to, the clean and safe (but heavily policed) streets and the occasional monologue from Gotham’s new Mayor, it’s all very 1984 and I’m HERE for it. This oppressive setting never detracts from Selina’s story, however and never takes over the story, the sole focus is left on her mission. Chiang is a seriously adept writer, which only makes the artwork more impressive.

Speaking of the art… man, oh man, is Chiang bringing his all for this. Every new setting feels unique and reflects the mood well, the flashbacks to Fool’s Night are distinct and moody. Everything just flows so well and the storytelling’s simply phenomenal.

I cannot overstate just how much of a marvel this book is. Everything’s done by Chiang! It’s his story, his artwork, his lettering, but the quality of the work never suffers from this. I can’t even begin to understand how much prep work this must have taken, to get the book to this high a quality while pulling the whole thing off on his own and STILL hitting his deadlines. It’s a seriously impressive feat.

Catwoman Lonely City is a work of absolute art. Writing, drawing, inking, coloring, and lettering your own book is not an easy task. There’s a reason we waited for each issue, but Chiang’s passion and drive always made the wait worth it. With a premise like this, how could the book NOT be amazing? How does Selina move forward without Bruce? Hell, how does Gotham move forward without him? You need to read this amazing book to find out!