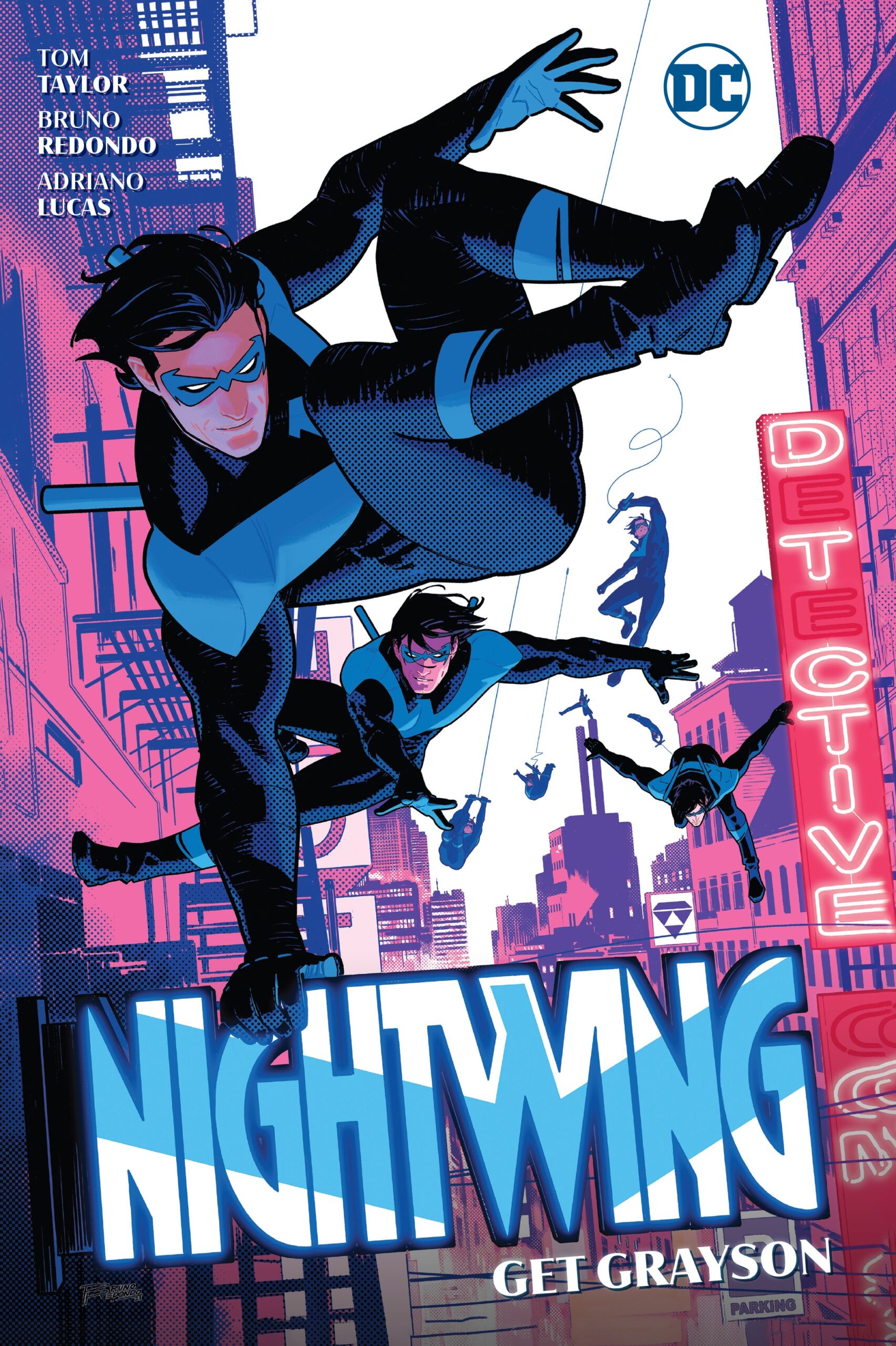 Joining the wonderful “Leaping Into The Light” and “Fear State” books, comes the brilliant Nightwing: Get Grayson collected edition.

This joyous volume collects the entire “Get Grayson” arc, and the two-part “World’s Finest Sons”, from Nightwing #87-#91, and Superman: Son of Kal-El #9; plus a host of variant covers, sketches, designs, and a look at the creation of the now legendary Nightwing #87.

The first chapter in this book features this issue, a comic that had me hyped for months when it was first teased by writer, Tom Taylor, and artist, Bruno Redondo in September 2021. Redondo worked on this issue for months because, as you will find out when you read it, it’s more than a little bit special.

No… scrap that. It’s INCREDIBLE. 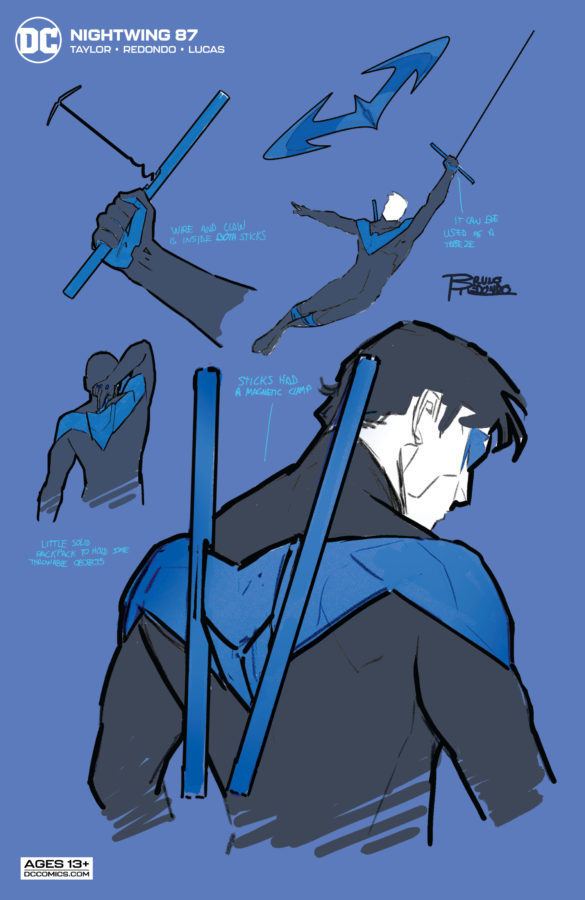 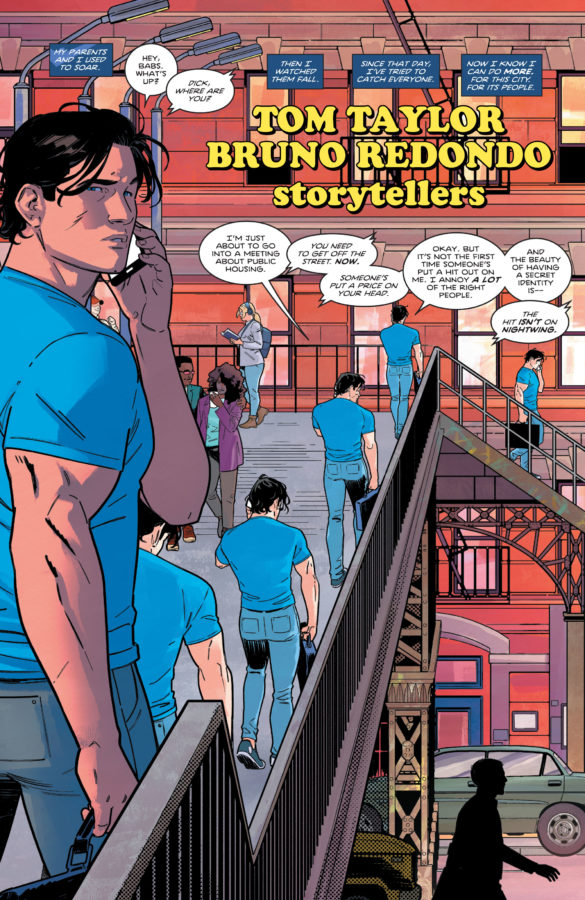 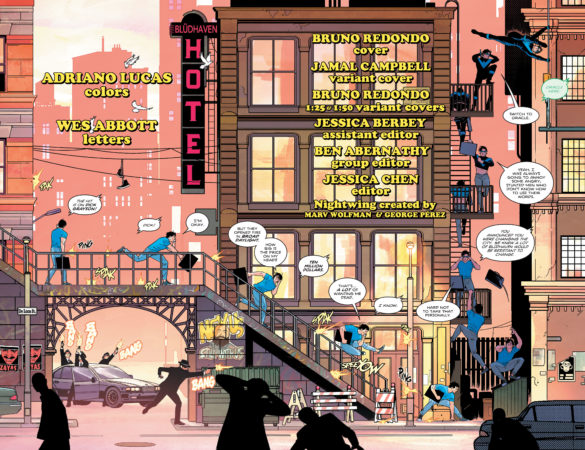 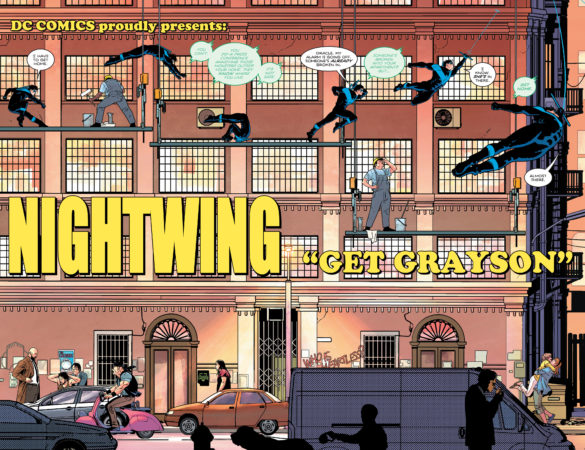 Comics fans have seen multi-page spreads before, but this is the first time (to my knowledge) that we’ve ever had a complete 20-page issue made up of one massive image, with the characters moving across it. The final result is simply astonishing! Readers in my home country of Spain got a version of it that folds out, so you can follow the story as a single image. If anyone out there can source me a copy, I’ll be eternally grateful. Thankfully, you can still enjoy the tale in this great book in its original page-by-page version.

The only word I can use to accurately sum up this opening chapter is, “WOW!” Every page is a delight to look at, study, absorb, and read. We get subtle jokes, creator cameos, Scooby-Doo’s ride, witty dialogue, and incredible action. Of course, this is by and large one giant action sequence, so don’t expect deep philosophy or a psychological study of the complexities of the human condition. No. Expect pure, white-knuckle, laugh-out-loud entertainment.

One (unjust) criticism I often hear leveled at DC Comics is that they’re too dark, or too gritty. This series has been one of the most joyous and fun books on the shelves for years, and arguably never more so than since this wonderful creative team took over. 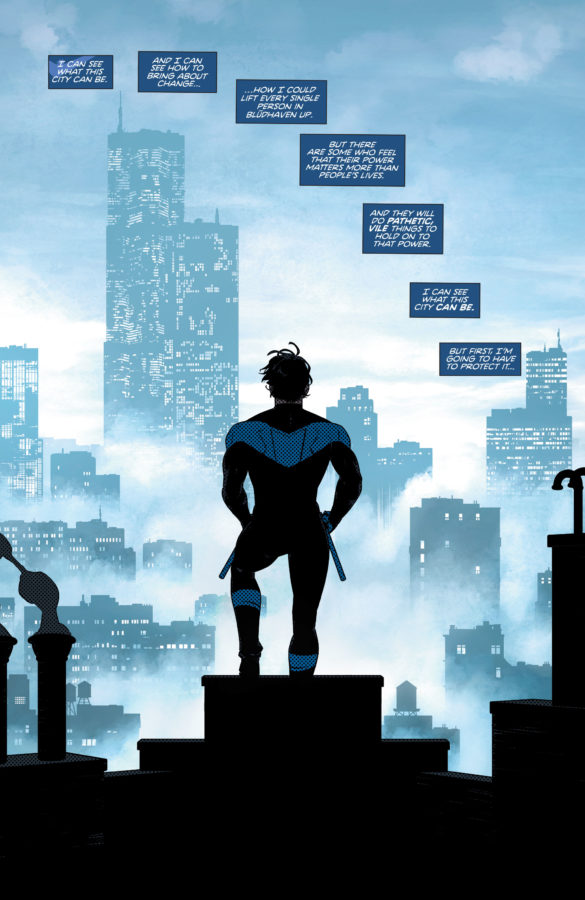 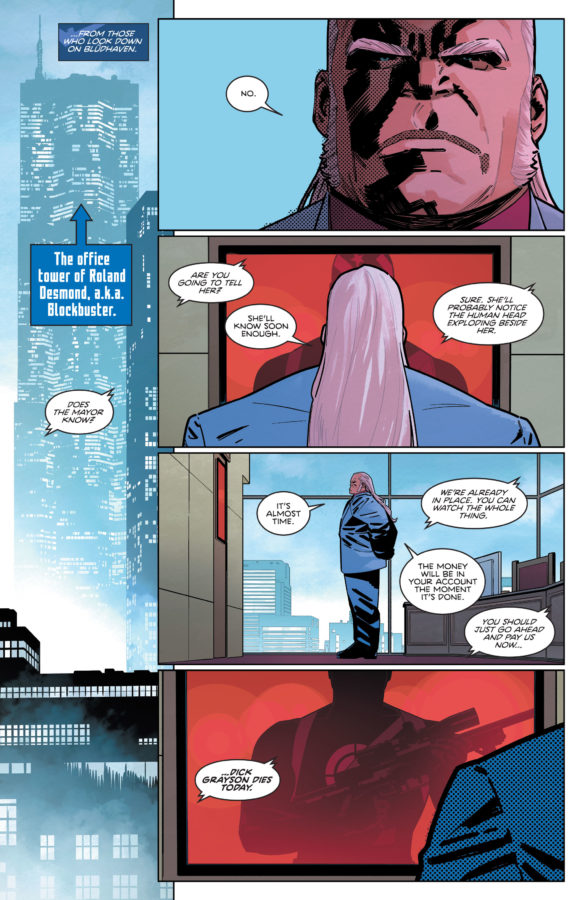 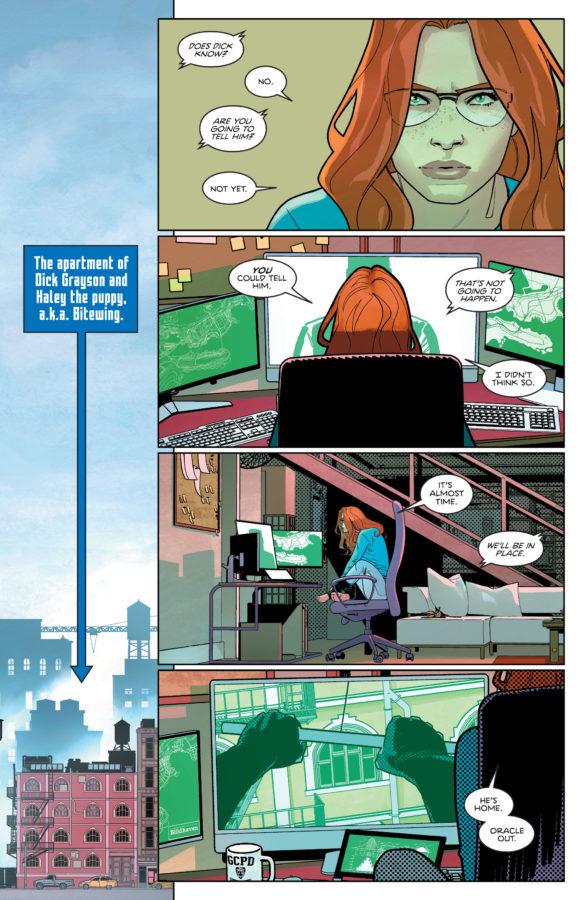 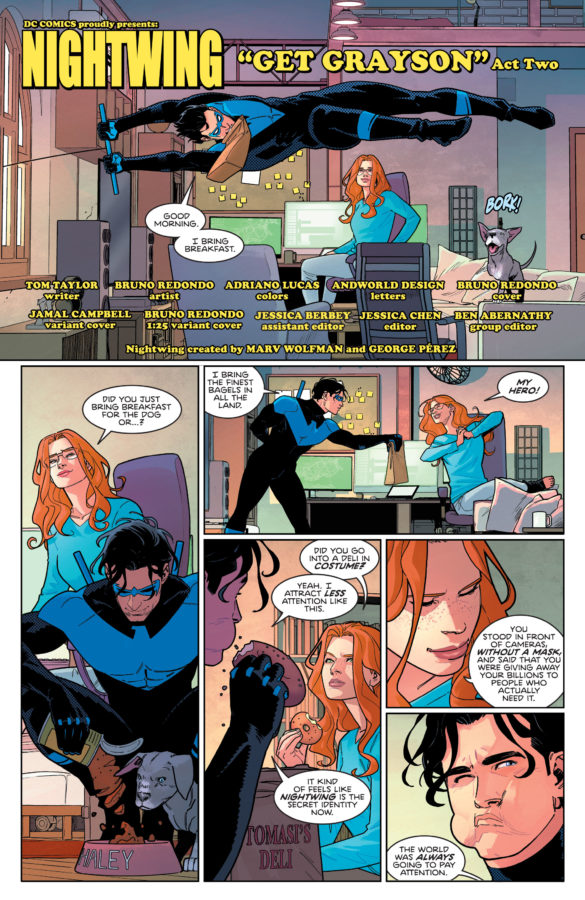 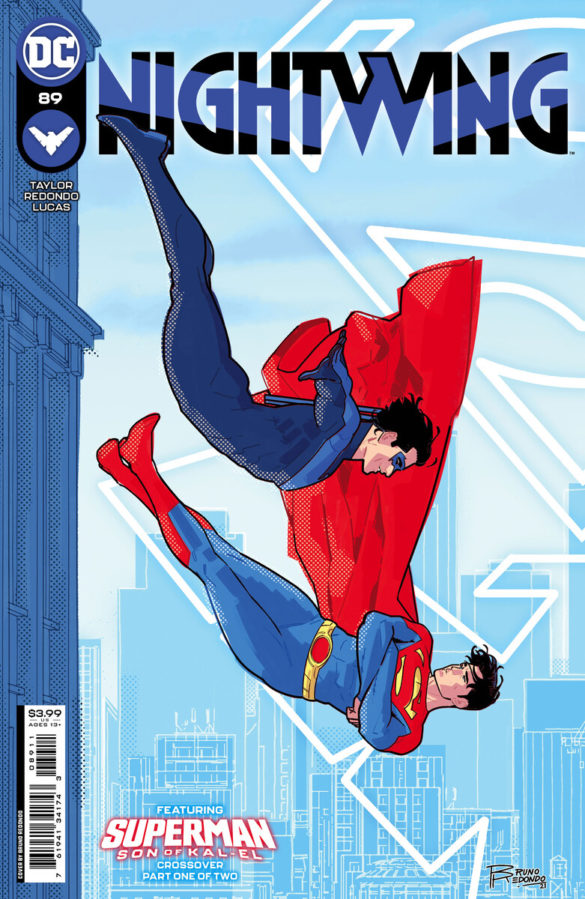 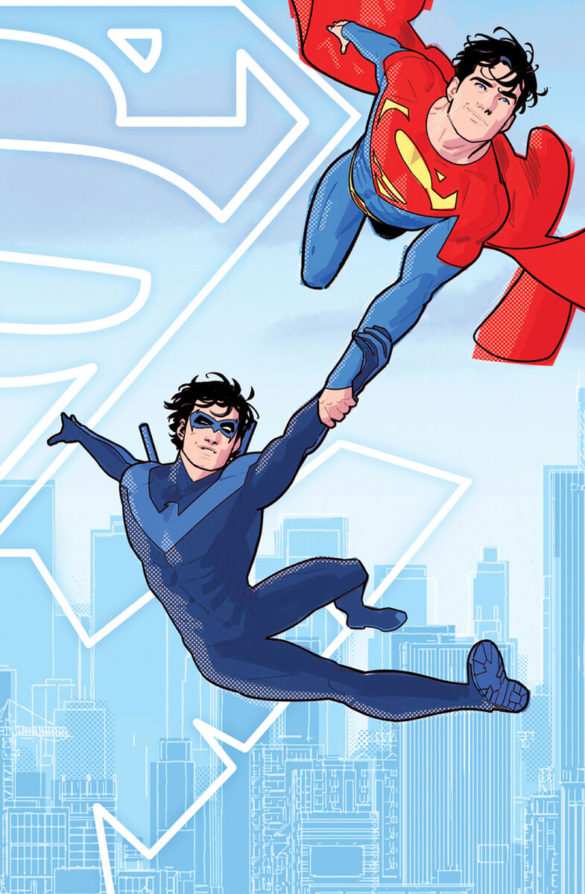 The writing is perfect, the art is sublime, Adriano Lucas’ colors are some of the finest you will ever see (look at the panoramas, lights, reflections, and tones in this book!) and Wes Abbott has never worked harder than he has on the opening chapter. Getting letters to flow with the images has got to be difficult at the best of times, but when the images are part of one, huge, sprawling, highly kinetic collage of awesomeness, the job must be harder still.

It’s always wonderful to see Batman and Superman side-by-side, but to see their sons working together too? Well, it fills my soppy old father’s heart with joy. First of all, it was great to see Jon as he was before he was forcibly aged up, meeting Nightwing and Batman for the first time and forming a bond that I know will only grow in years to come. The nostalgia quota hits even more highs, as we also got to see Nightwing in his black and red costume, and Superman Sr. in his Rebirth costume. Yessir, this collection is a gift that keeps on giving.

Reading the Superman: Son Of Kal-El chapter, I have to admit that another aspect that really stood out was the stellar ink work by veteran Wade Von Grawbadger, as I felt a different texture on these pages than when Mr. Redondo inks his own pencils. What’s great here is that, even though we can see Von Grawbadger’s own stellar talent, this is clearly a story that was drawn by Bruno Redondo. 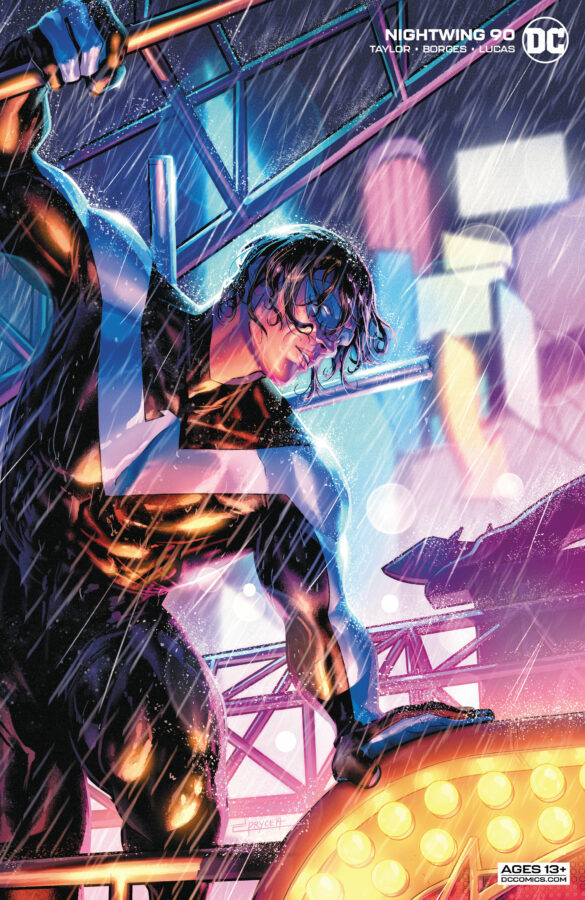 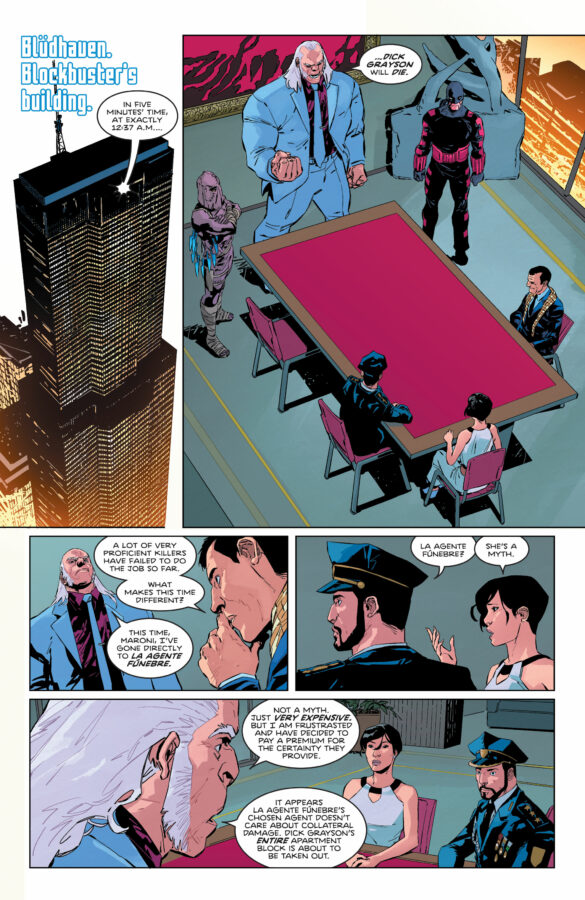 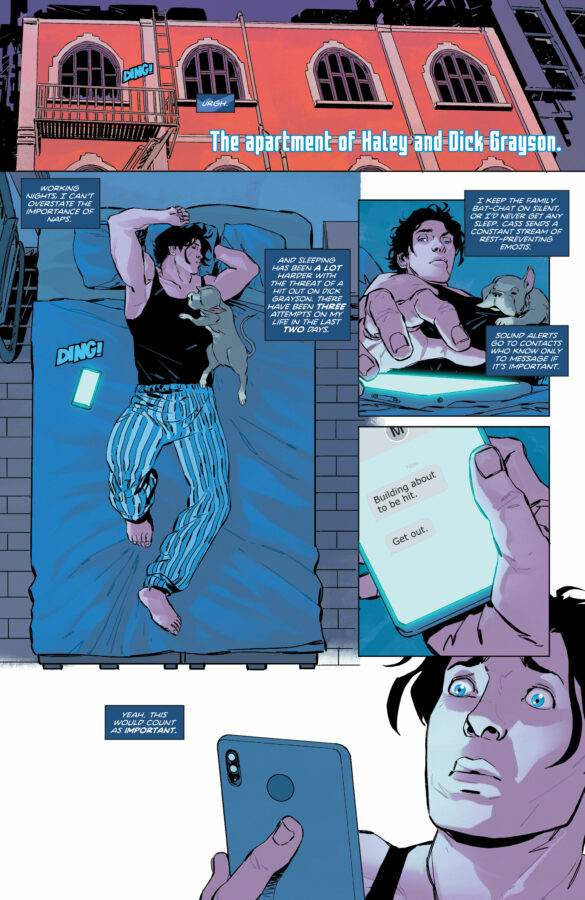 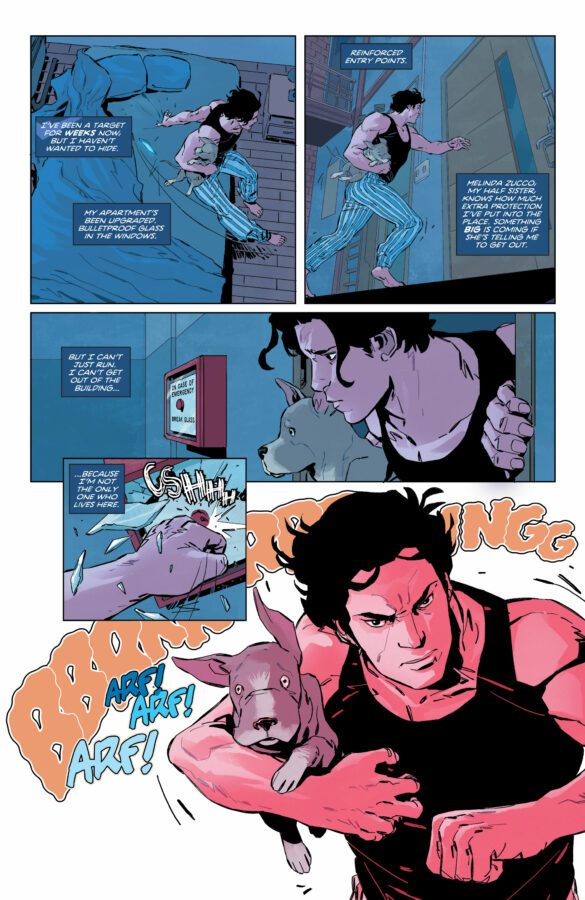 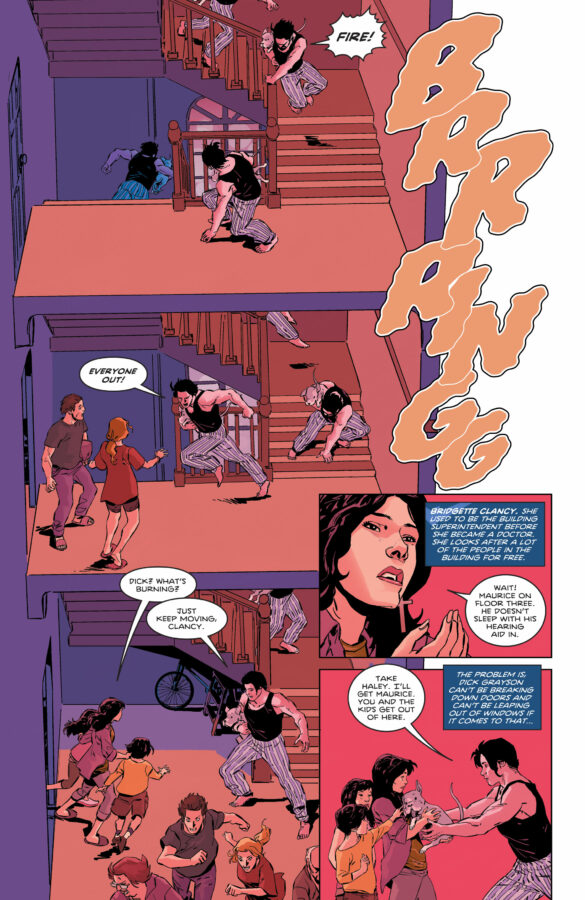 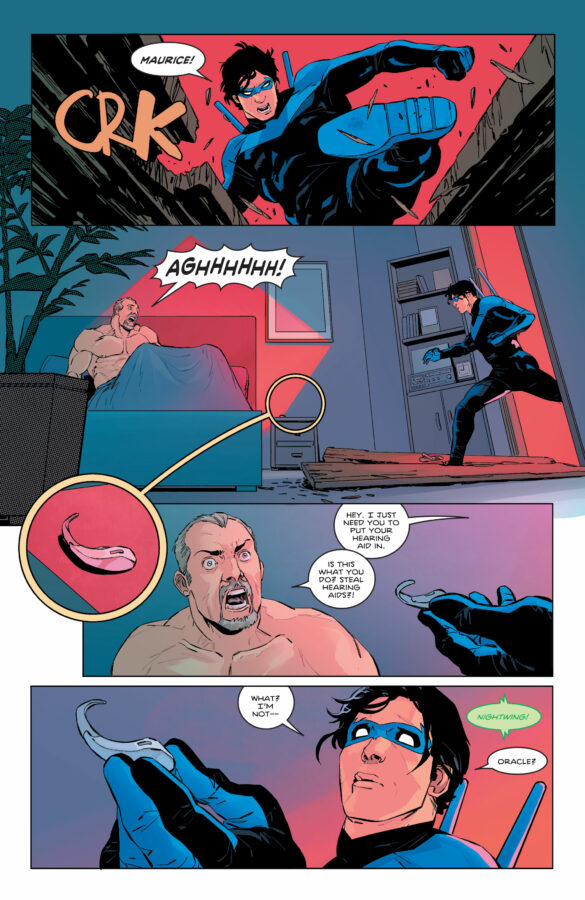 Inkers, like color artists and letterers, are frequently forgotten about. A great inker, in my opinion, puts his own stamp on the art, but doesn’t swamp the penciller’s work and make it unrecognizable. Wade Von Grawbadger is a great inker.

Of course, the new Man Of Steel isn’t the only hero Mr. Grayson teams up with, in Nightwing: Get Grayson; this stellar collection also reunites him with his best friend, Wally West, AKA the Flash. These two chapters are drawn by the brilliant Geraldo Borges.

You can probably see my smile from space.

Restoring Wally to the DC Comics timeline is, for me, one of the greatest things that’s happened in comics for a long time. His redemption after the horrors of Heroes In Crisis in the pages of his own book, plus the reintroduction of his wife Linda, and his children Irey, and Jai healed a hole in my heart I didn’t even know was there. 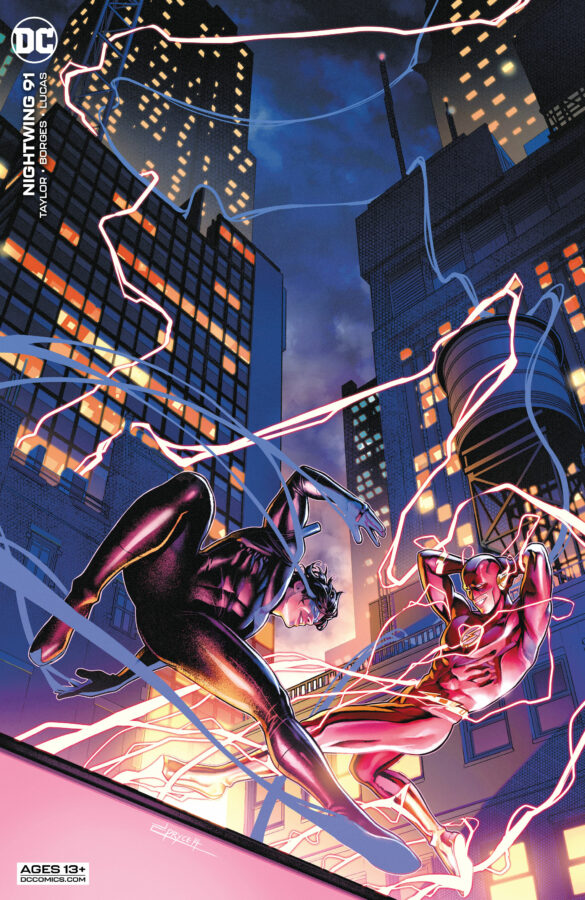 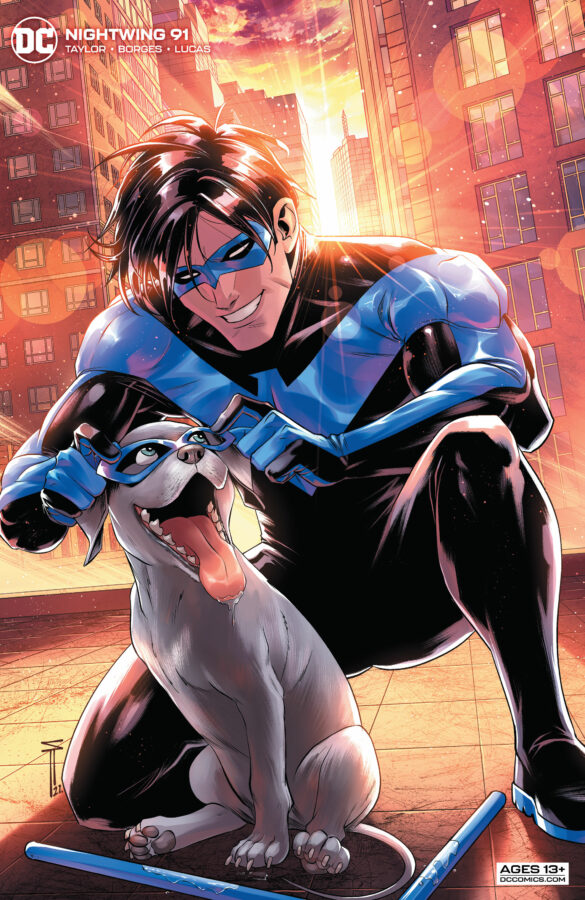 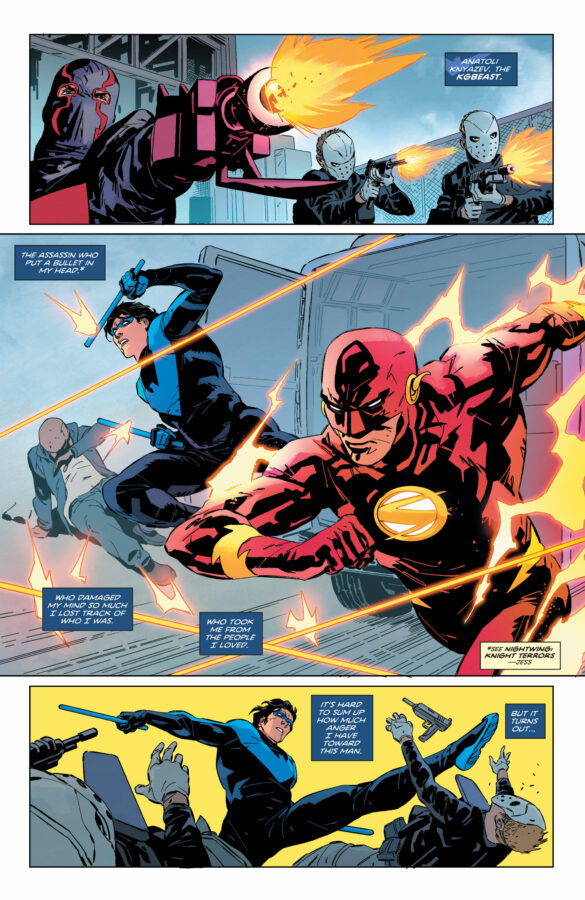 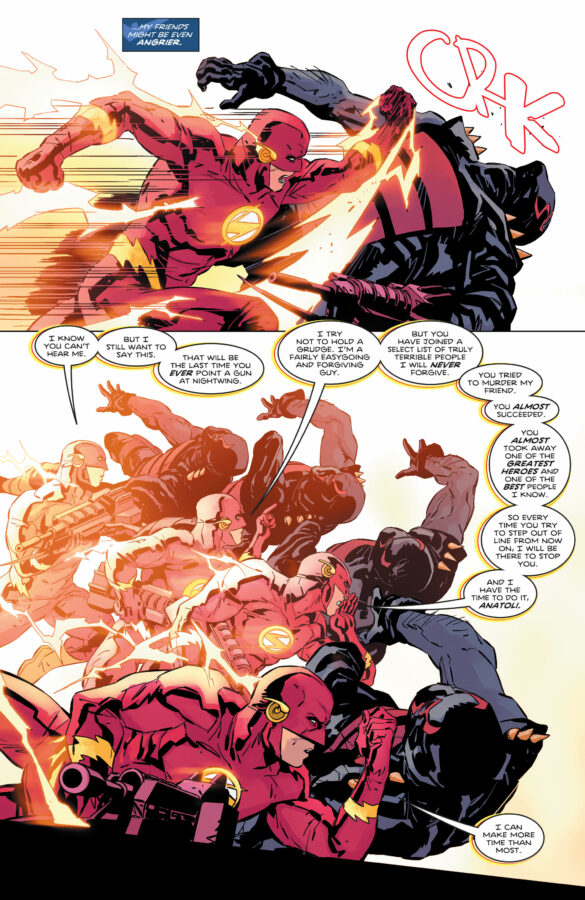 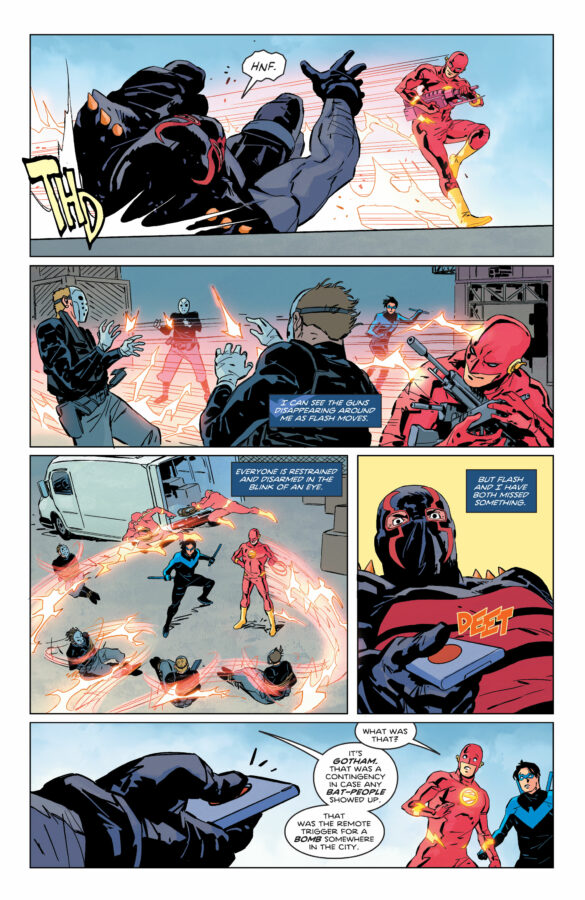 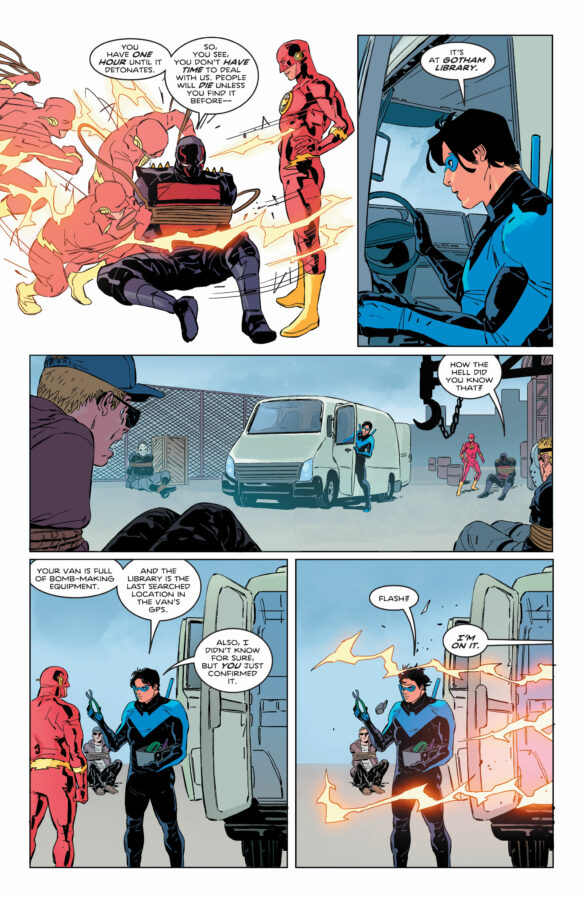 Linda and the kids’ reactions to finding Dick Grayson in their home are both hilarious and heartwarming. Seeing the two heroes reunited genuinely brought a lump to this old fan’s throat. It’s no secret that I like my grim and gritty comic books, but having stories that are pure fun every so often (or every single issue, in the case of this series) adds spice and variety to life.

The last time I saw Dick Grayson and Wally West together was in the brilliant (but very dark) Robin & Batman. This team-up is a million miles away from that, but just as valid and every bit as well crafted. Tom Taylor has (surprise, surprise) given us a wonderful story, full of action, fun, laughter, and love. A favorite moment is when Wally finds out about Nightwing’s sister, Melinda Zucco. Classic.

The two former Teen Titans go up against the KGBeast, the villain who shot Dick Grayson in the head, stealing years of his memories. If you thought that only Dick’s Bat Family had a mad-on for this particular villain, wait until you see how The Flash reacts!

I love that the team-ups with Jon Kent and Wally West feel very different. Even though the new Superman is one of the most powerful beings on Earth, Dick feels like a mentor for him. Wally West is also a powerhouse, yet his love and respect for this “normal” human being is palpable and moving. I love Dick Grayson, and it’s clear that all his comrades and creators feel the same way.

Dick Grayson has always been one of my favorite characters, and I’ve collected every issue of his Nightwing, Grayson, and Batman adventures since Nightwing volume one (way back in 1995). This is a character that’s always attracted the best writers and artists, probably because he could actually be the true center of the DC Universe. His series has always been good, frequently been great, and sometimes downright essential reading. The run which began with “Leaping Into The Light” falls firmly, landing in a superheroic pose, at the very top of the latter category.

I bow my head with love and respect to every single member of this creative team. Jessica Berbey, Ben Abernathy, and Jessica Chen; I’m so jealous… but I don’t envy you. I know that editors have a really tough job sometimes, but when you get results like this, the rewards are worth the struggle, I’m sure. Credit, where credit’s due, must also go to guest inker Jordi Tarragona and letterer AndWorld Design for their contributions.

If you haven’t been reading this title, run (don’t walk) to your nearest bookseller/comic shop, or whiz over to your favorite online retailer and order Nightwing: Get Grayson and all the other collected editions.

If only all comics were this good.