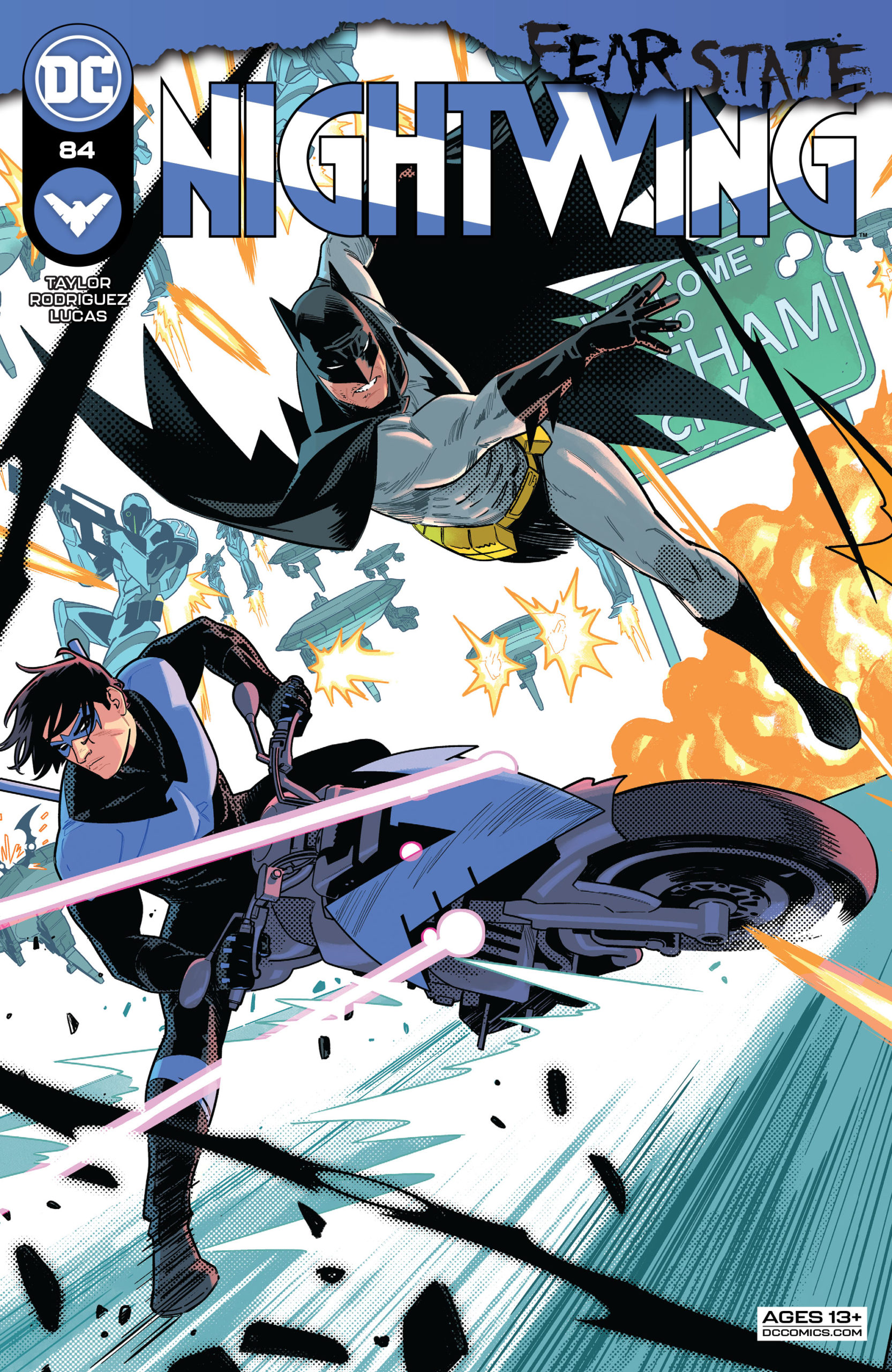 Nightwing #84 is a roller-coaster thrill ride of a comic, which sees our hero joining the fray for the latest epic Bat-Family crossover event.

This could well be the very best superhero series on the shelves right now. There… I said it. Issue after issue, Tom Taylor and the creative team knock it out of the park. Notice that I didn’t mention Bruno Redondo…  even though he still provided a stellar cover, Mr. Redondo didn’t draw this issue, as he’s working on something very special for issue #87. More on that later. Yes, I miss him, but the wait is gonna be sooooo worth it.

In the meantime, this issue is in the safe hands of the hugely talented Robbi Rodriguez, and the ever-present master of the hues, Adriano Lucas. I love Robbi’s work, and his art on Batgirl remains a firm favorite. His Nightwing is cool, slick, and as badass as you could hope for. Of course, any excellent artist always looks even better when his work is polished and finished by someone as remarkable as Adriano Lucas. The night sky, the setting sun on the lower half of a skyscraper, and a hero leaping into the void. From the very first page, this issue grabs your attention.

In a very short space of time, Tom Taylor has created a setting and a group of supporting characters for Dick Grayson that’s so well-realized and crafted that you feel you’ve known them for years. Haley is adorable, and Dick’s neighbors are a joy. There’s also a certain Ms. Barbara Gordon, someone you may have heard of. I’m not going to give away spoilers, but any Babs fans are going to simply LOVE this issue.

Oh, and some guy with a pointy-eared cowl turns up in this issue too. It’s pretty cool.

We get street fights, cute laughs, another Ikea catalog moment, characters, carnage, and kick-ass color. What more could a comics fan ask for? Letterer supreme, Wes Abbott, also shines. On ages two, three, four, five, ten, eleven… you get the picture… Mr. Abbott provides some stellar sound effects lettering throughout the book, all of which work brilliantly with both the line and color art. This is seriously great stuff.

I love the way the Nightwing #84 manages to work, both as part of the ongoing series and as an event tie-in without alienating readers who may not be collecting both stories (though anyone who isn’t buying this book is seriously missing out). Every guest artist we’ve had in the last couple of months has excelled, and recruiting Robbie Rodriguez to draw the issue which will delight Barbara Gordon fans was a stroke of genius; he’s the man who drew the last Batgirl Arc, which itself was a part of the last major crossover, “Joker War“.

This issue was fantastic.

As for what’s been keeping Bruno Redondo so busy? Well, thanks to Polygon and Tom Taylor, we now know. Nightwing #87 is going to be a game-changer. I can’t wait!