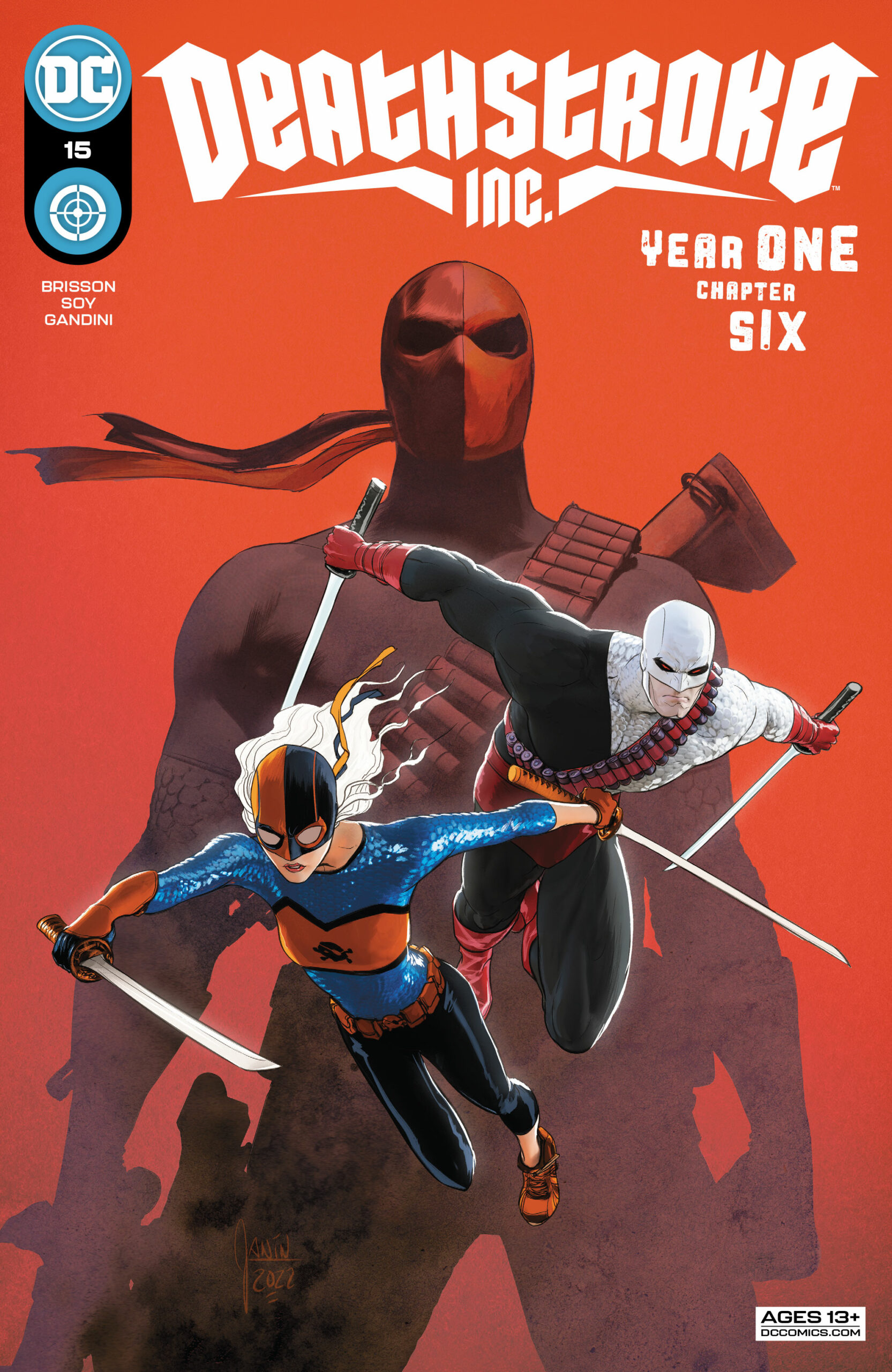 It took us some time to get here, but Deathstroke Inc. #15 finally concludes the “Year One” arc. Considering this is only the 15th issue of the series, it’s surprising that we spent so long in a flashback, but I’m sure this will serve a greater purpose to the overall narrative.

Slade locks in his fate as the “world’s greatest assassin”, so we’ll see if that comes back to bite him in the butt.

As ever, spoilers follow below, so make sure to get caught up on previous issues or reviews! 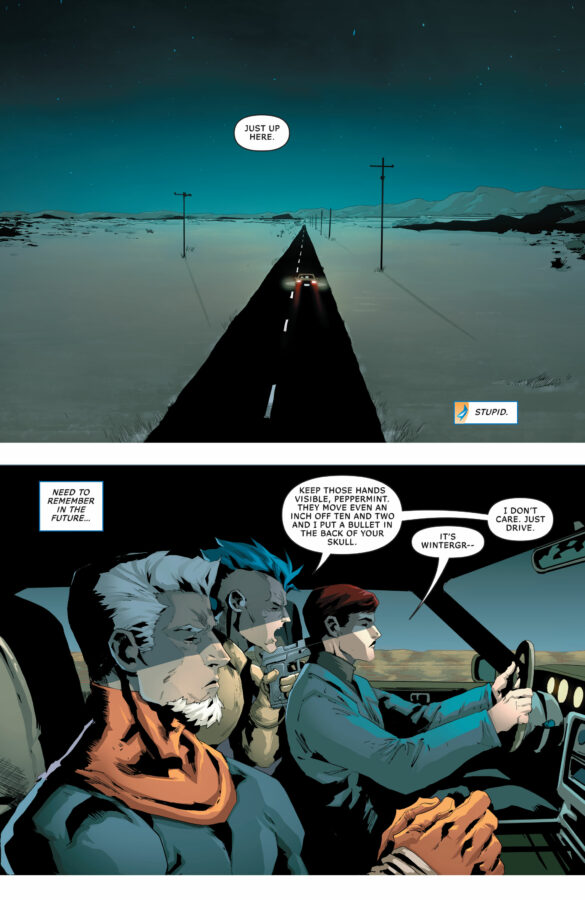 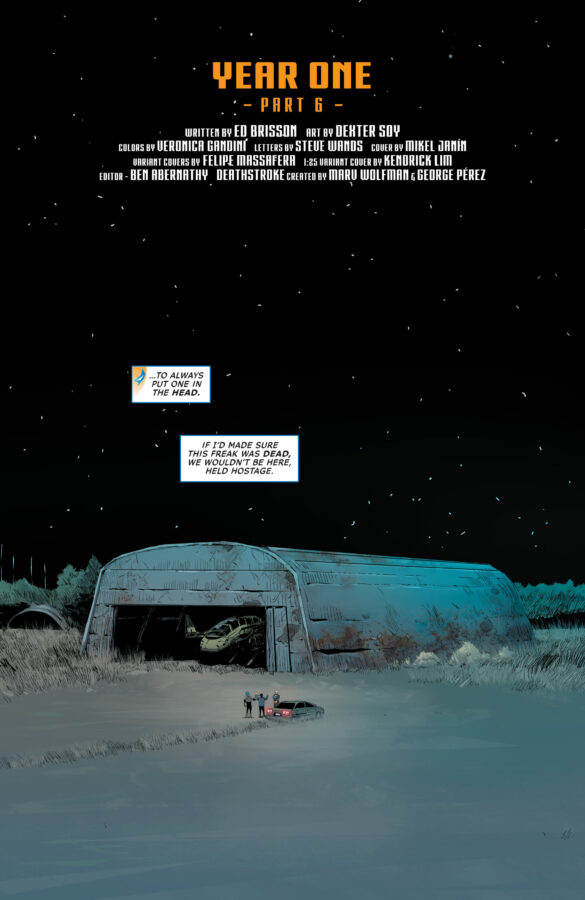 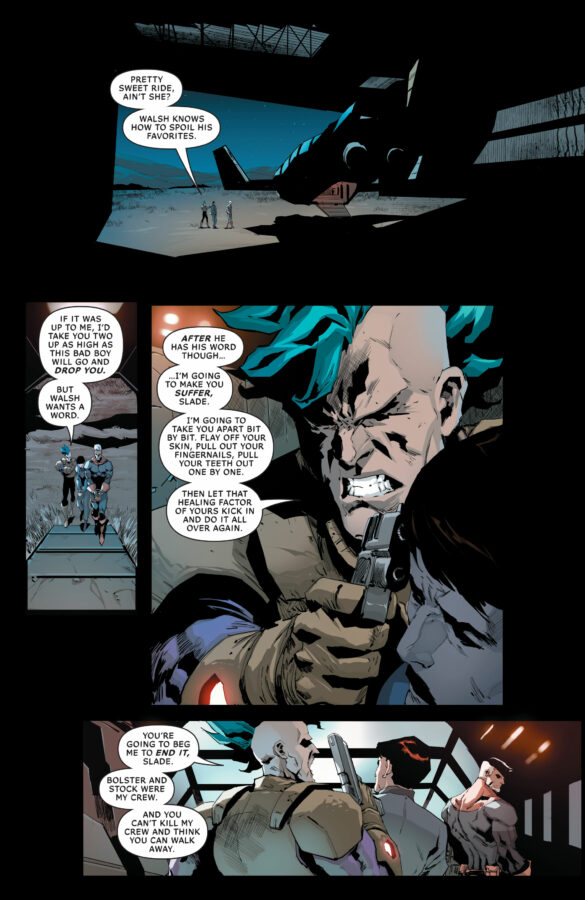 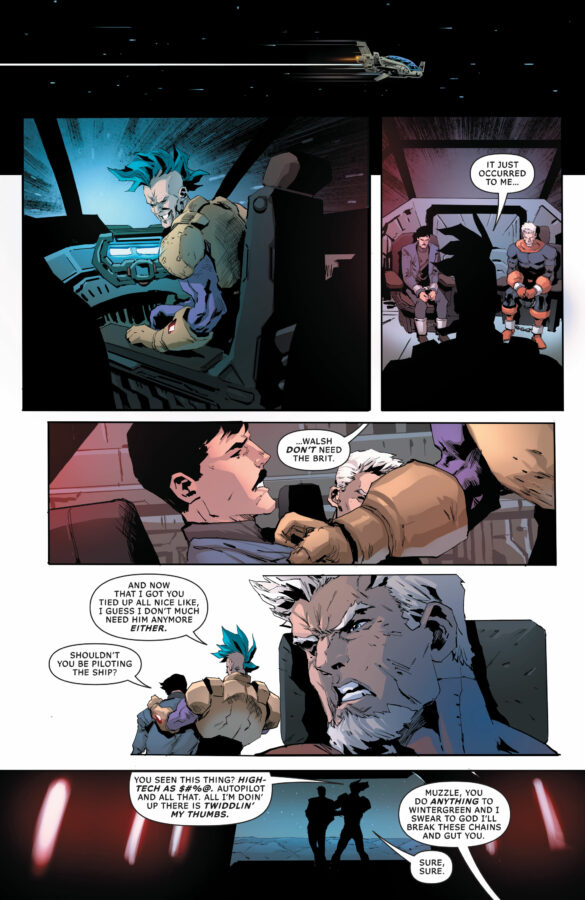 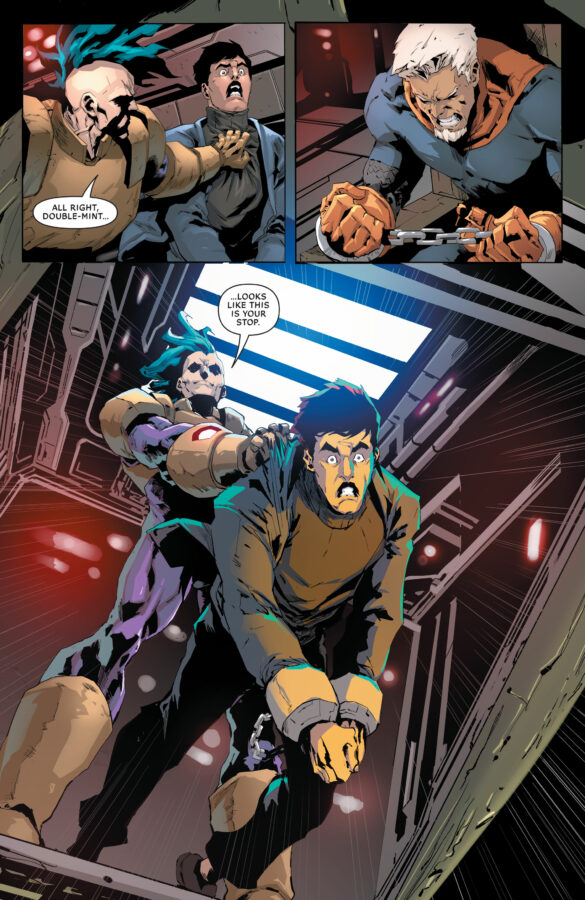 I mean, we knew that Slade wasn’t going to die. There’s no plot armor or future existence (that we know of) to protect Wintergreen, but I also didn’t anticipate Slade to start losing allies early on in his career. We know that Grant Wilson dies facing off against the Teen Titans years down the road. This is referred to by Deathstroke as the main event that causes him to become so jaded about his work. So, Wintergreen dying doesn’t add up, at least not yet in the comic’s time.

What I wasn’t expecting was Muzzle’s (the man who captured Deathstroke and Wintergreen) quick dispatch. Considering how he got the element of surprise on our “heroes” in the previous issue, I expected the guy to be a bit smarter and not underestimate the protagonists. As Wintergreen points out, the villain is definitely a disappointment.

I also wasn’t expecting so much talking. For such a punchy arc, both Deathstroke and his foes spend a significant number of panels just threatening each other, with no follow-through. Perhaps this is what will bring relevance to this arc in future issues. However, reflecting back on the stories before the “Year One” arc, Deathstroke has been taking out much more significant big baddies than his “creator”. I guess we’ll find out what’s up next month.

Once again, I know that we’re supposed to be on Deathstroke’s side, the series is called Deathstroke Inc., after all. I know he’s intended to the protagonist but come on, man, it’s hard to root for a ruthless killer. Even if Slade isn’t the worst person in the comic on the morality scale, his decision making is flawed. He’s also driven only by pride and a competitive spirit, which is something that both Walsh (his contractor) and Slade himself note. Deathstroke’s mind is kind of falling apart and he knows impartially that his work is wrong. He just doesn’t care.

So, do we support him and his journey? We know from reading other issues, even of just this series, where Slade ends up. He’s blinded by hatred, grief, and revenge, to the point where he wants to kill teenagers, because of the death of his son. Deathstroke’s despising of and plotting against the Teen Titans isn’t connected to a contract or opportunities to show his skills, but pure vengeance.

I don’t entirely know how I as a reader am supposed to accept that. Marvel’s counterpart to Deathstroke, Deadpool, has a very different back-story and therefore different motivations, which makes him significantly easier to support as a result.

Maybe I’m being too harsh on the guy. I know every human is flawed, as are superhumans. I’ve always just been a bit aligned to lawful/neutral good motives and it’s difficult to sway from that. This doesn’t change that I’m happy for positive outcomes for the characters in the story, even if I can’t always endorse their actions.

I’m glad Slade got to return home to his wife, I really am. It’s good that he’ll be there for his children (and Slade’s twisted mind points out that he has a cover for his new alias) … but, I don’t think it’s fair to put it only on Slade for his children turning out a bit messed up. Upon Slade’s arrival home to Adeline, she slaps him in the face. He takes this jokingly as her way of saying hello, but I think it’s pretty screwy.

We all know that Slade’s a messed-up guy. I mean, he goes on after this flashback arc to build a prolific career as an assassin. He talks extensively throughout “Year One” about how he is losing his empathy and some of his ability to love but, as far as we know, Slade’s never committed domestic violence or done intentional harm to those he “cares about”.

I can understand Adeline’s hormone-fueled rage, because she knows her husband is lying to her. However, this is no reason to get physical with him. The panel itself depicting the slap is almost as vibrant and animated as previous pages’ action sequences. This is… troubling to me, to say the least. Slade’s definitely not doing right by his wife or his family, but I feel like Adeline is viewed as a saint by many characters, based on their later descriptions. I’m going to have to disagree strongly on that one. 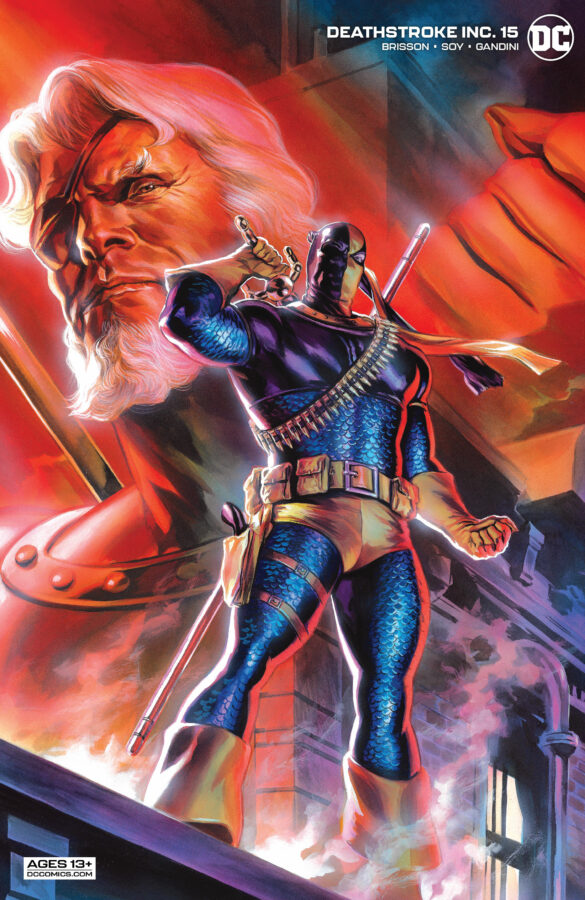 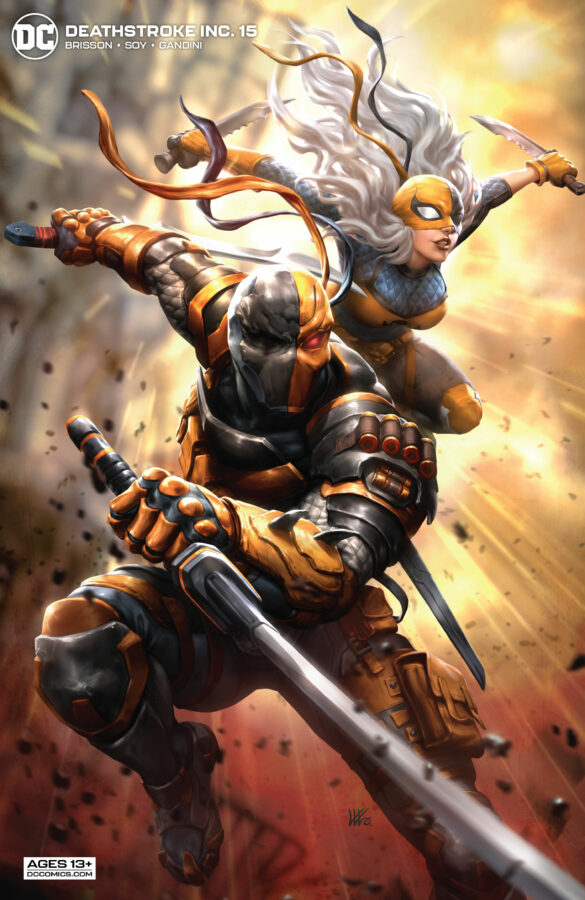 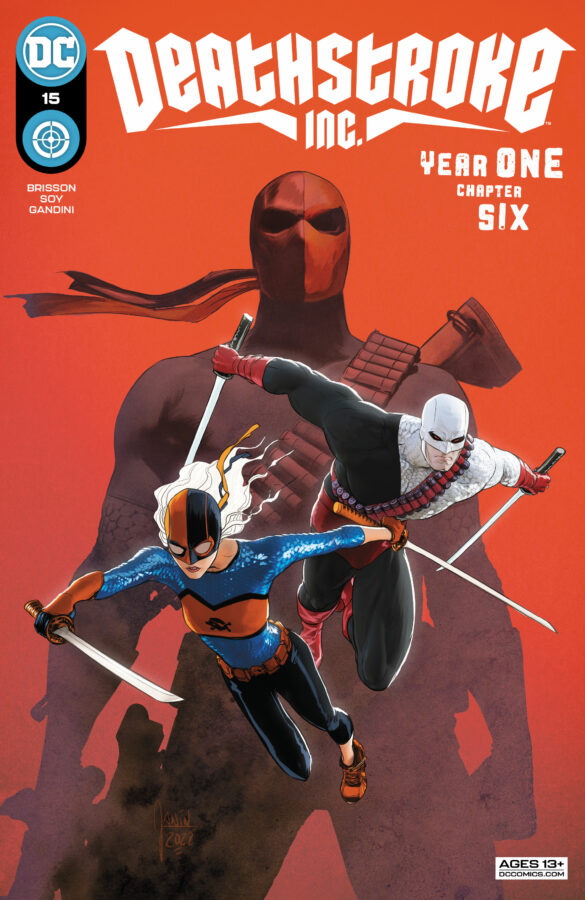 “Year One” is over. Deathstroke Inc. is definitely better for it overall and I extend my congratulations to the consistent creative team throughout the months. Deathstroke Inc. #15 however is little more than the arc’s endcap. There’s nothing wrong with that, other than there’s no new territory being established. We don’t know where the story is headed in future issues, and that was at least one reassuring thing month after month with “Year One”.

I’ve come to expect quite a bit from Deathstroke Inc. (I think of that rainbow story universe Slade found himself in many issues ago with immense fondness). These past few issues have been standard but unexciting. I wouldn’t call them boring per se, but they’ve been largely less creative than the series’ introductory issues.

Hopefully, future chapters will bring back the vibrancy and excitement of those from the inception. Trying at patience, we shall see.