Sideshow Art Prints have released the Batman: The Animated Series 30th Anniversary Fine Art Print. The piece is by the artist Orlando Arocena and celebrates a major milestone for this fan-favorite show.

The “dark deco” style of Batman: The Animated Series meets Orlando Arocena’s signature vector art style in this stunning tribute! Inspired by the famous opening title sequence, this moody portrait sees the Caped Crusader watching over Gotham City from atop the shining Bat-Signal. The red, rainy skies are illuminated by lightning as Batman prepares to cleanse the streets of crime, one villain at a time. 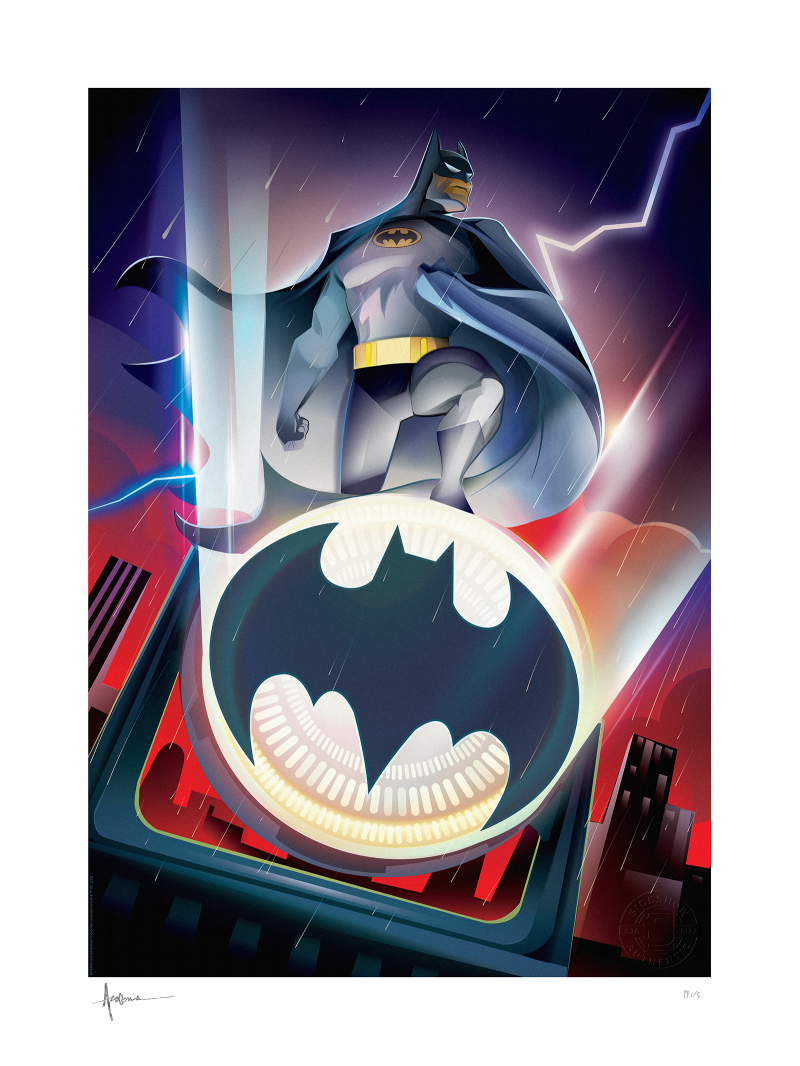 Each Batman: The Animated Series 30th Anniversary Fine Art Print features an authorized, automated artist signature and an embossed Seal of Authenticity as a part of the limited edition of 250 pieces. Available as an unframed giclée or in a custom framed presentation, this Batman artwork is a must-have for fans of an iconic iteration of the Dark Knight.

Orlando Arocena (Mexifunk) is an artist and graphic designer who works in traditional and digital mediums. After graduating from Pratt Institute in 1994, he drew his way through Europe, co-founded Uptown Arts, and discovered he had a knack for digital commercial communications. In addition to a 20-year track record of delivering creative solutions for some of the world’s most recognizable brands he has established himself as a non-conventional vector illustrator who explores cultural iconography, pop culture, and speculative narratives.

His vector art has also been commissioned by Adobe to be the face of their Illustrator CC 2014. And he is the recipient of 5 Clio Entertainment Awards, for his collaboration with several Hollywood Movie Studios.

In addition to commercial endeavors, he has exhibited his artwork at Miami Art Basel, The New York Armory Show, The U.S Embassy in Prague, The Museum of Western and Eastern Art Odessa Ukraine, The Metropolitan Museum of Art in New York City, plus a multitude of official movie / pop-culture gallery events.

The Batman: The Animated Series 30th Anniversary Fine Art Print is now available to pre order from Sideshow Fine Art Prints and is expected to ship between November 2022 and December 2022.