It’s all in the eyes! Sideshow Collectibles is the place to go for fine art prints and this new Catwoman art print release focuses on DC’s greatest thief at her most effortlessly alluring.

The image reprints artist Ben Oliver’s variant cover for Catwoman #7 from 2018. It’s unusual for a superhero comic cover to simply feature a portrait image but if the artist is good enough, a well-crafted headshot can do the business of any power stance or an action pose. The trick is how to get the essence of the character, the iconology of the costume, and a sense of story, all in one attractive image… and make it look, you know, different. 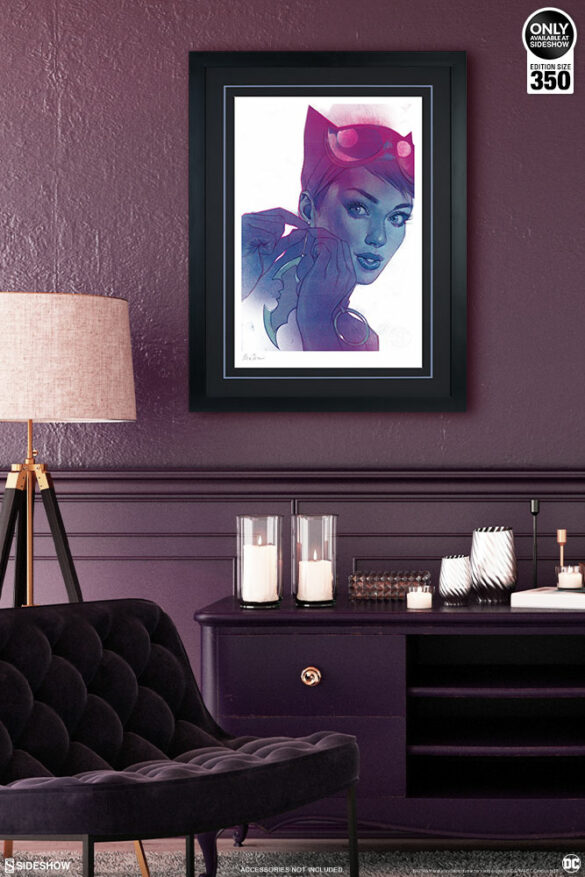 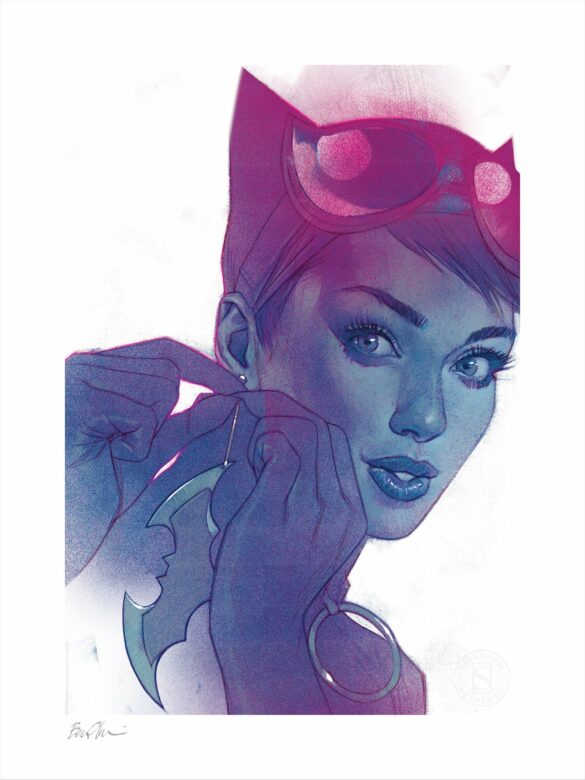 So we have the familiar headpiece with the cat-ears, plus the goggles. Then there’s the model-esque beauty mixed with humor which calls to mind the Adam Hughes covers from the mid early 2000’s. Is she putting on her own jewelry or has she just been caught stealing someone else’s? Either way there’s no mistaking the Batarang – the fact that it makes an impractical earing adds the layer of playful humor. The result? An image that’s unmistakably Catwoman.

If you’re unfamiliar with Ben Oliver, he’s a British illustrator who earned his stripes on Judge Dredd before working for both the Big Two comics houses. Recently his work has been split between independent comic projects, variant covers and the heady world of advertising and concept artwork. Go to his Instagram or Twitter pages and you’ll find that he has an uncanny ability for realism when it comes to headshots – whether working directly from photographs of actors in famous roles, or in his interpretation of fictional characters.

Officially licensed by DC Comics and limited to just 350 copies, each giclée  Catwoman art print comes with an authorised automated signature and embossed seal of authenticity. Unframed prints are 18″ x 24″ and valued at $95, while the framed prints are 22″ x 28.5″ and cost $260. On last check the white frame portraits have already sold out – it’s not hard to see why.