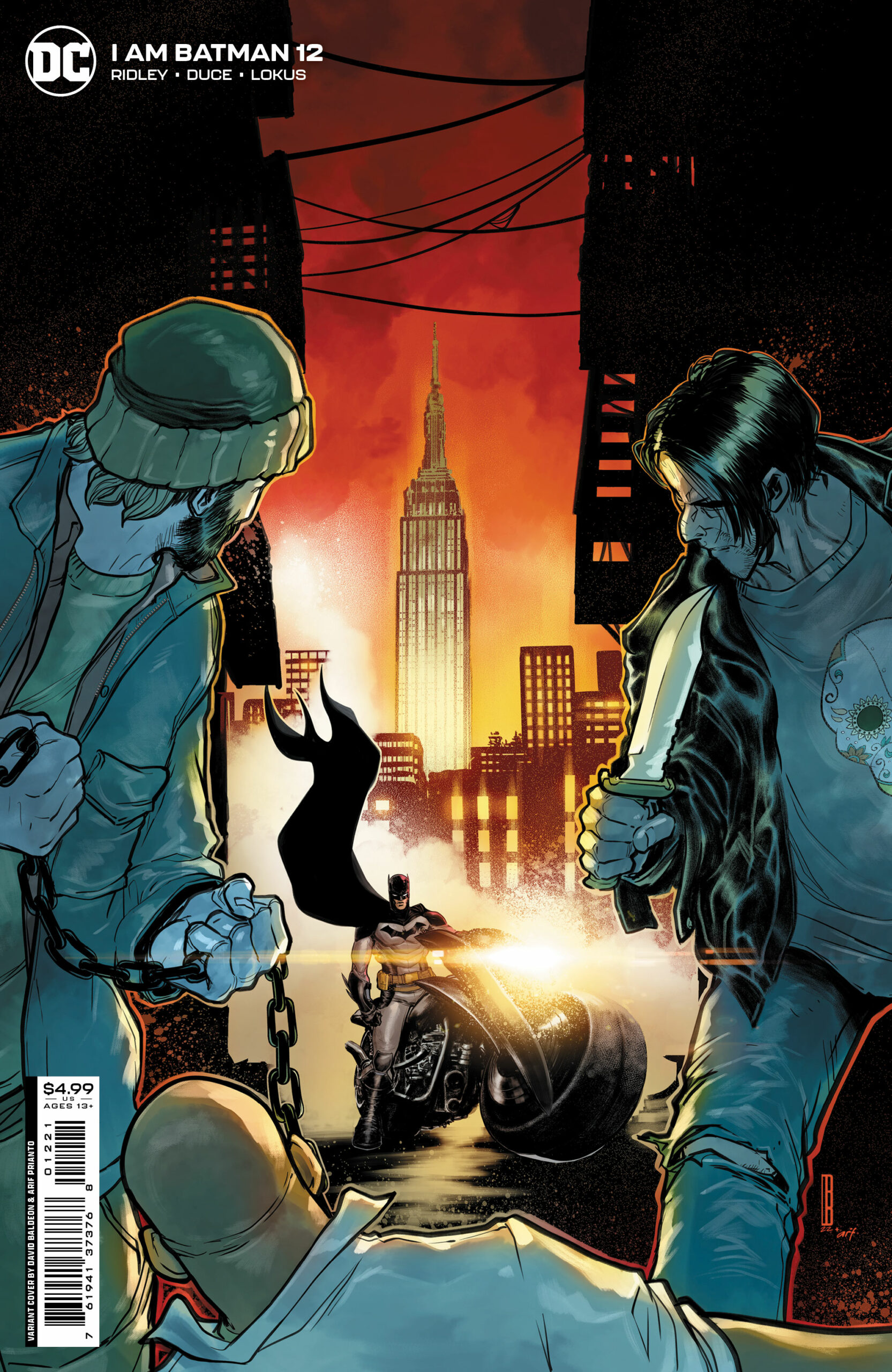 In I Am Batman #12 DC’s most inscrutable hero arrives in New York City to task Jace Fox’s Batman with helping them solve a mystery of the past. At the same time, Tiffany Fox continues on her path to see who could be New York-and DC’s-hero of the future.

The issue begins with Jace coming face-to-face with the Question. This team-up really got my attention, as they have always been one of my favorite characters. Even though Vic Sage is my favorite Question, Renee Montoya is a close second. Given Renee’s presence last issue, it’s hardly surprising that she shows up in her costumed identity in this issue. 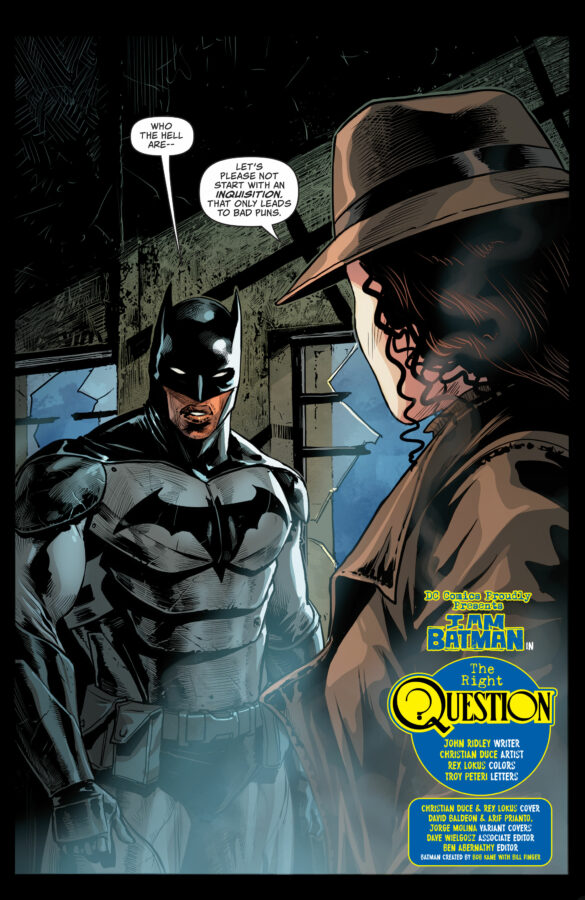 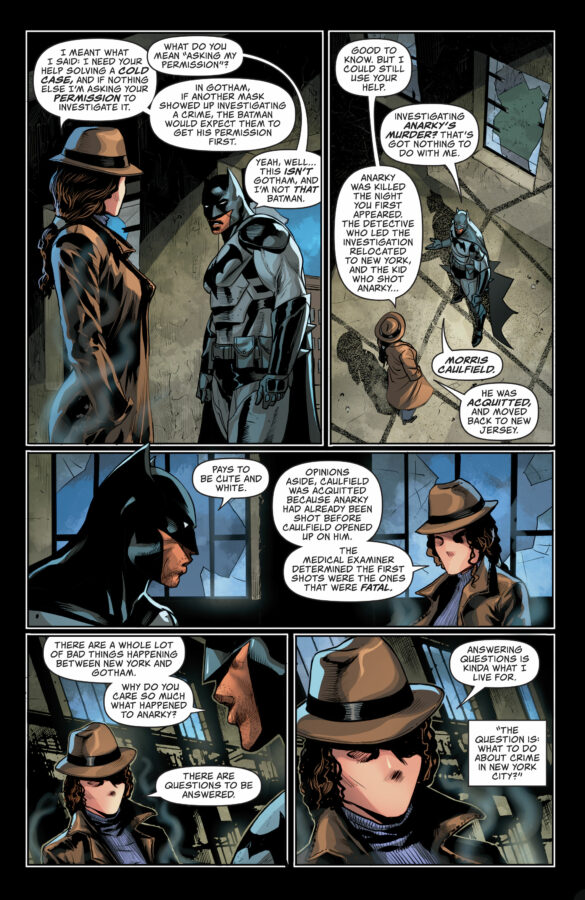 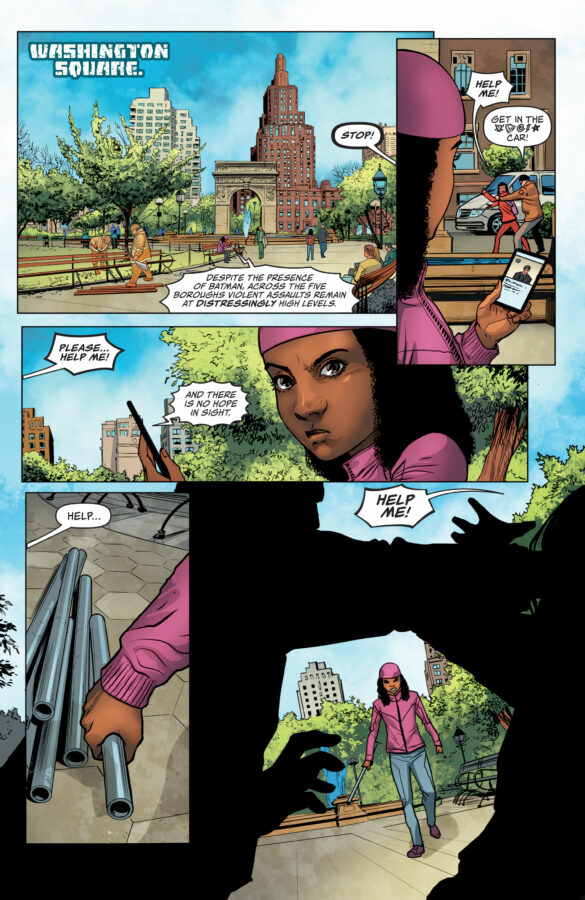 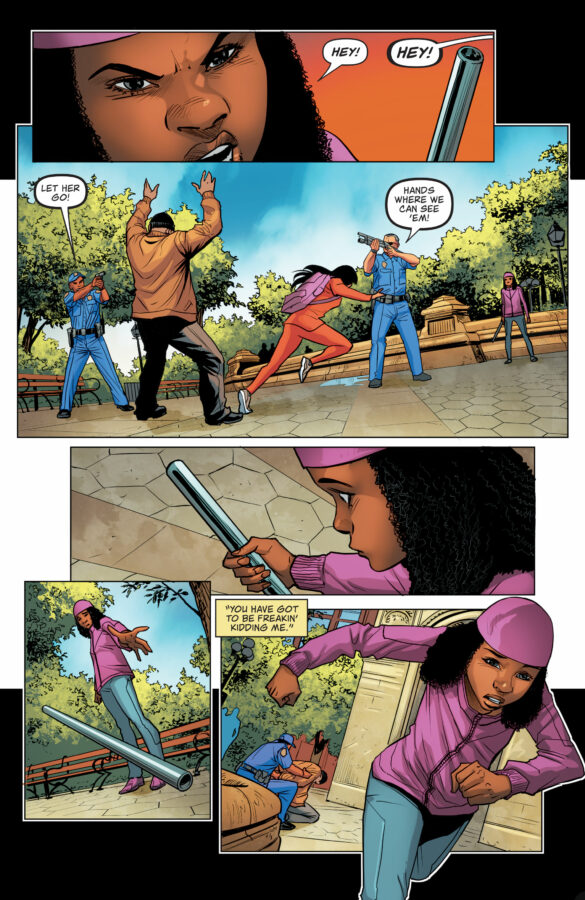 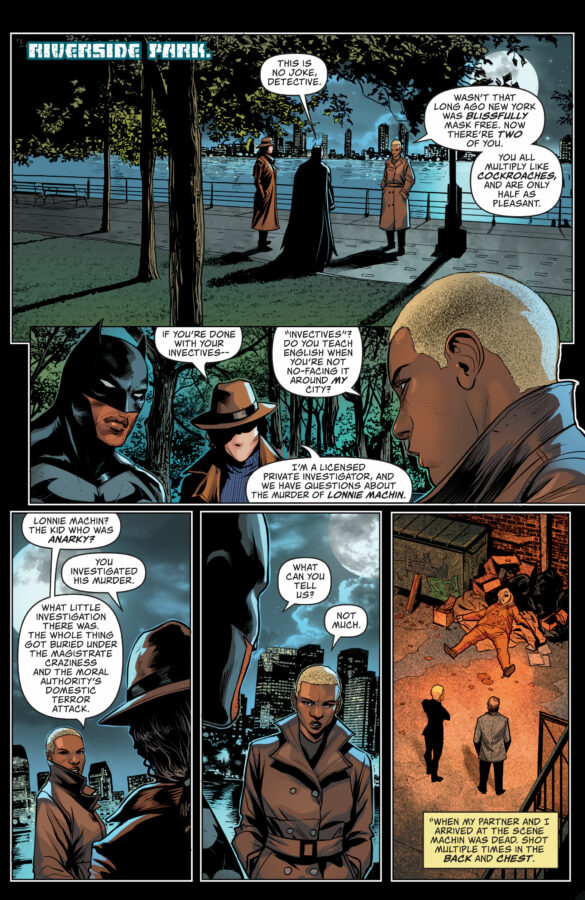 Her business in Gotham as the Question is to investigate the murder of Anarky, and it appears that she’s using her interview for the job of Police Commissioner as the pretext to carry out her investigation in New York. It’s still unclear, however, whether Renee is just visiting NYC or if she’s going to stay. The Commissioner job is basically hers for the taking, and she seems to be seriously considering it.

DC’s advance solicitations seem to indicate she’s not leaving Gotham in the next few months. On the other hand, DC’s titles aren’t always in sync. I get the feeling that Ridley wants Renee for this title, but Zdarsky and Ram V may still want her in Batman and Detective Comics. Perhaps this story’s meant to present Ridley’s case for getting to use the character.

If she does stay in New York, will she be able to remain active as the Question? It seems to me that being both Commissioner and masked vigilante would be difficult in either city, but perhaps n NYC, she could find a workable balance between her two identities.

Her first encounter with Jace highlights an important difference between his Batman and Bruce Wayne’s. Renee states that she’s asking Jace’s permission to investigate Anarky’s murder, which bewilders him. Bruce is very territorial about Gotham City, and is very disapproving of other heroes working in Gotham without his authorization. On the other hand, Jace has no issue with Renee, or presumably, any other hero, pursuing a case in NYC. For Bruce, Gotham is his city, but Jace doesn’t feel that level of protectiveness over New York – at least, not yet.

I like Ridley’s idea that Renee has a unique ability to “get people to self-examine”. She does this to get a suspect to talk to her and Jace rather than fight them. She describes this to Jace later: “I got him to hold a mirror up to himself”. It’s intriguing to see her resolve an encounter with words rather than fists. However, I’m sure that she’ll also show off her fighting prowess before this case is solved.

We also see more of Tiff’s desire to find a way to help the people around her and failing to do so. Once, in an attempt to help another kid with a computer programming assignment, and in the other case, she nearly steps in to help a woman fight off an attacker. Given that Ridley keeps coming back to Tiff’s need to help others, I suspect that Tiff becoming Robin to Jace’s Batman will be happening sooner rather than later. He wouldn’t be emphasizing Tiff’s story if the payoff was planned for a long way down the line. 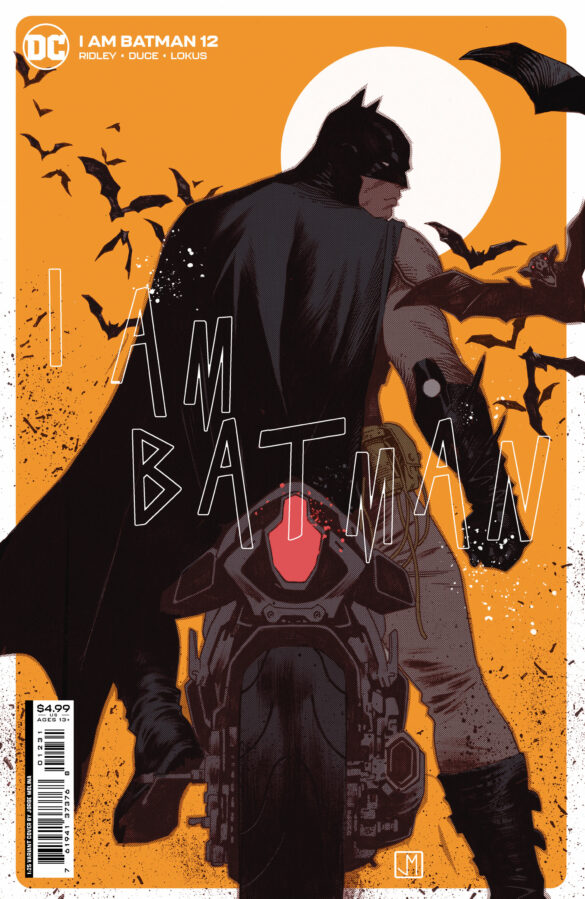 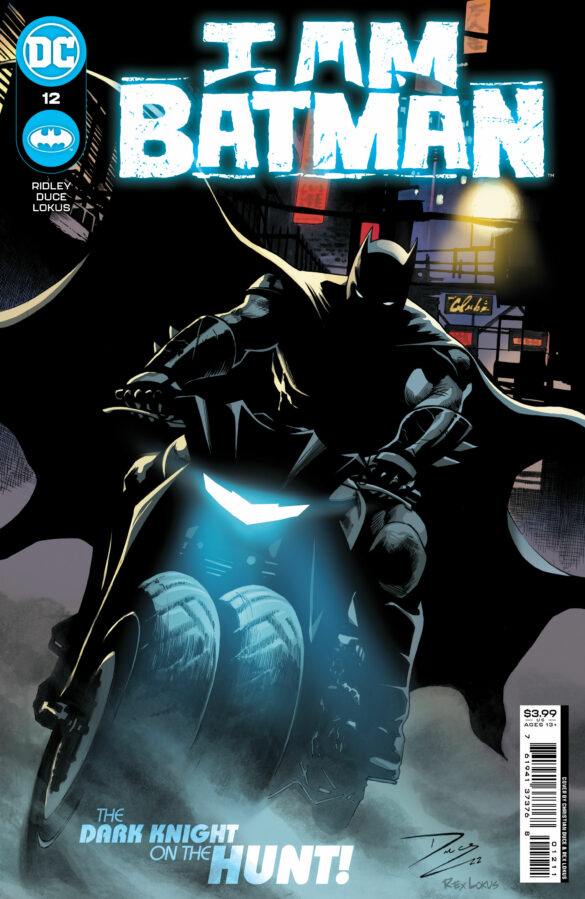 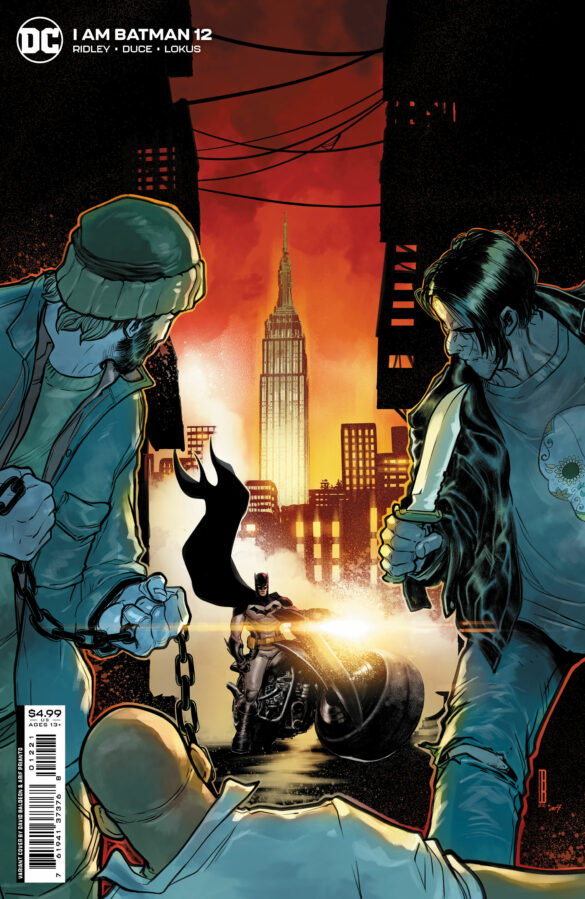 Christian Duce’s artwork in this series continues to astound. His depiction of NYC is fantastic, both at nighttime and during the day. Jace’s Batman and Renee’s questions look their best, so I can hardly wait to see the design for Tiff’s Robin costume when she takes on that role.

I have absolutely no complaints. In fact, I would say that I Am Batman #12 is one of the best issues of this series yet. The issue presents a great start to Jace’s first major team-up with another hero (outside of “Future State“ stories), so this chapter has me eager to see what Ridley and Duce have planned for the rest of this team-up.