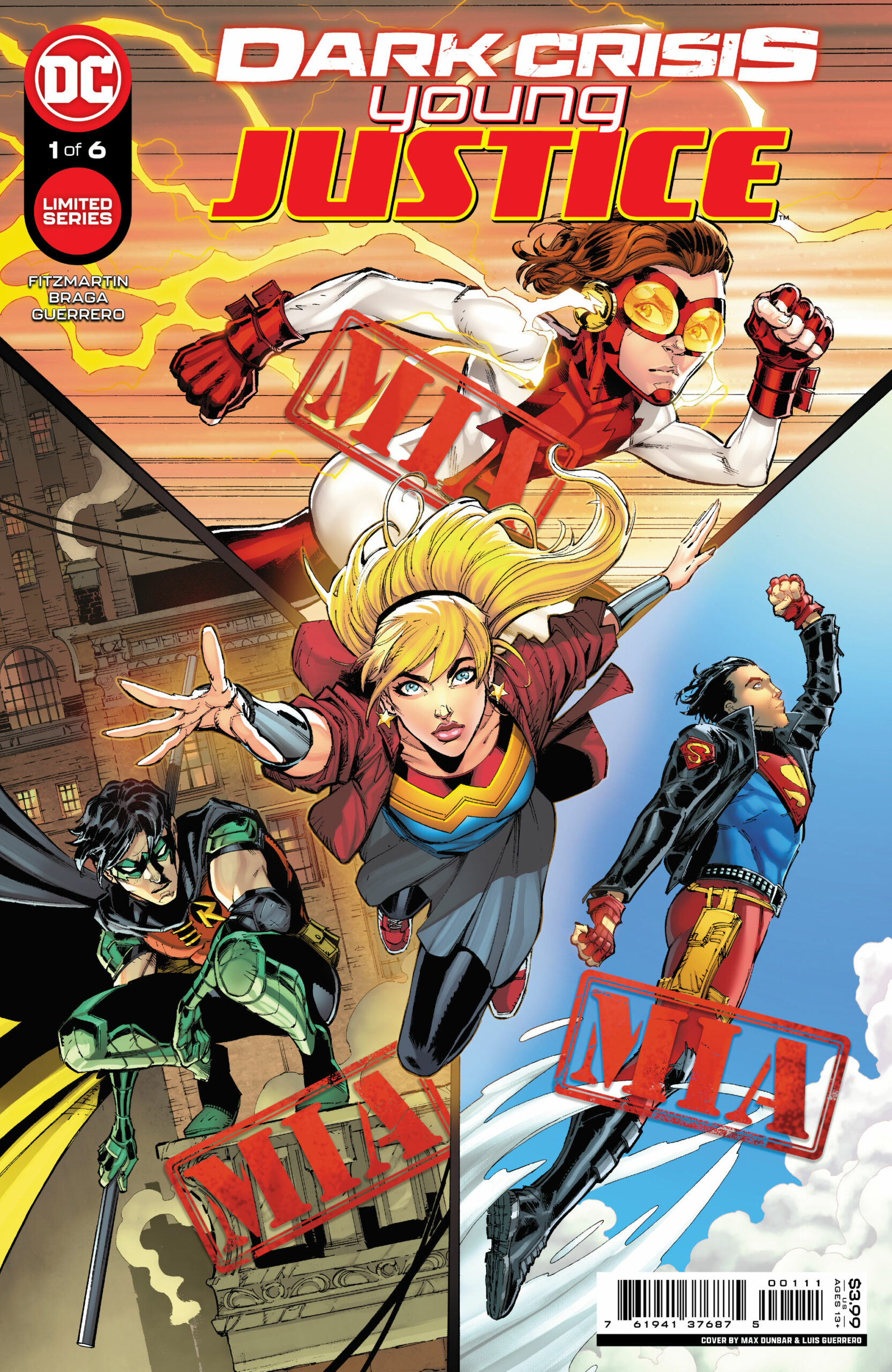 So, in case you missed the various memos I’ve posted, or you have been living under a rock for the past 6 months, the Justice League is as dead as Old Marley’s doornail (see Justice League #75) and just like everyone else in the DCU, the members of Young Justice are in mourning. 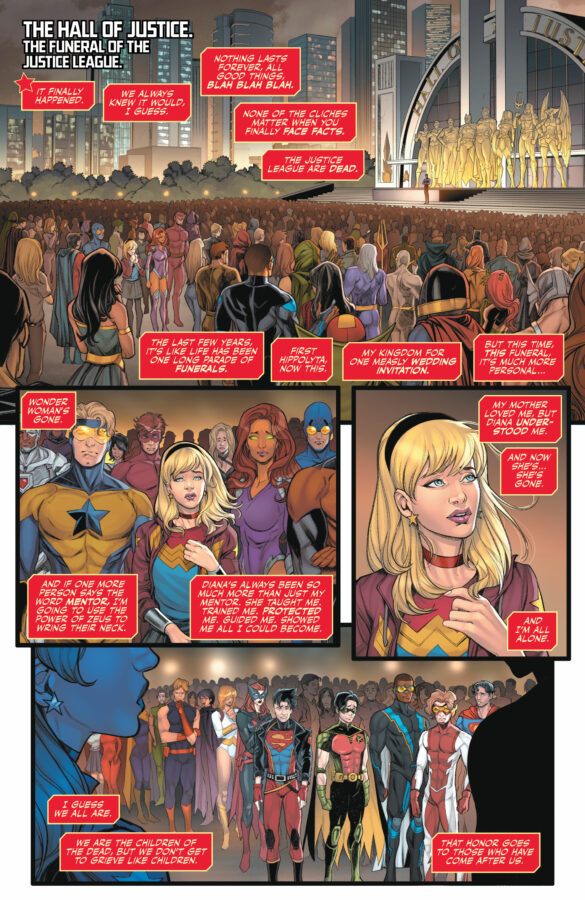 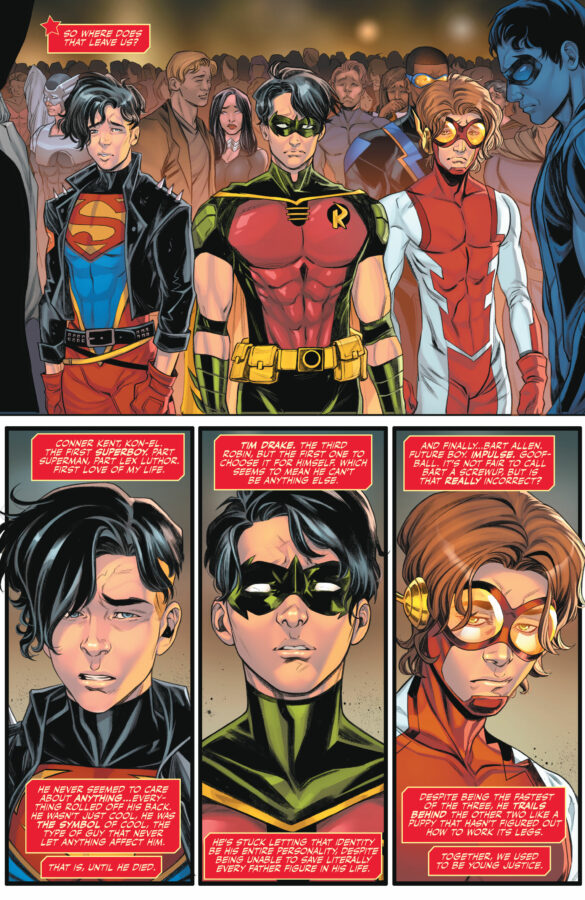 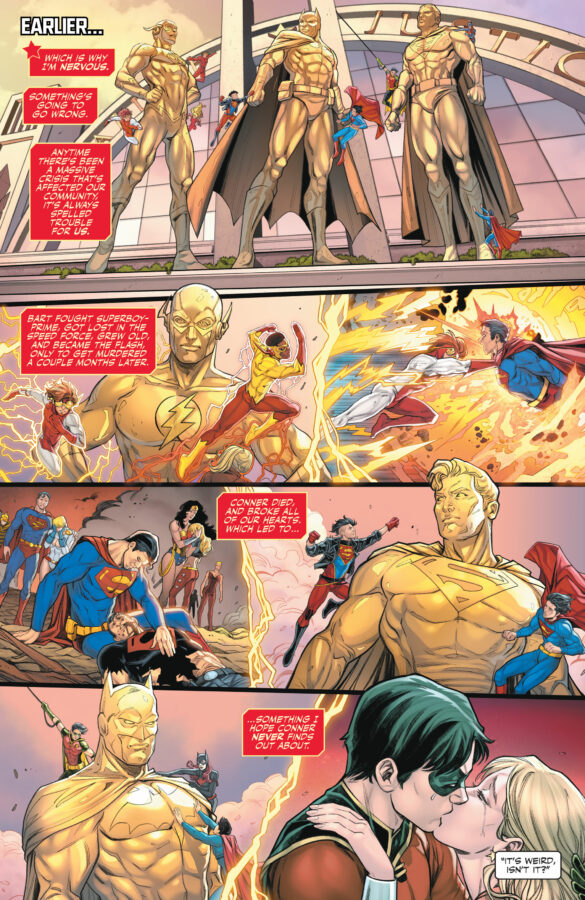 The issue opens with Wonder Girl (Cassie Sandsmark), Superboy (Conner Kent), Robin (Tim Drake), Impulse (Bart Allen), and Arrowette (Cissie King-Jones) reuniting for the first time in a long while. They meet up at the Hall of Justice after the funeral in Dark Crisis #1, and things are tense between the old teammates. For starters, Cissie has retired her tights and is now a full-time student. It doesn’t help that Impulse’s tactless humor only makes things more awkward.

The issue is narrated by Wonder Girl, who at one point wishes that some of her former teammates would have stayed dead. So, with serendipity that can only occur in comics, Superboy, Robin, and Impulse suddenly disappear while no one’s looking. Wonder Girl panics, thinking that her wish may have inadvertently killed her friends while everyone else shrugs her off, assuming that the boys have gone off to mourn their “fake fathers”.

Meghan Fitzmartin must be a millennial because Dark Crisis: Young Justice #1 is an emo-drenched, nostalgic romp that will make those in their 30s bust out their skinny jeans and favorite Blink-182 album. Largely, this is due to Wonder Girl’s angst-ridden narration. As a teen hero living through *another* DC Crisis, Cassie articulates a woe familiar to American millennials who too have lived through multiple crises: 9/11, the Great Recession, the 2016/20 Election, a Global Pandemic, the January 6th Insurrection, Climate Change, and post-COVID inflation. So yeah – Cassie and the crew feel angsty, which is perfectly appropriate for their generation. 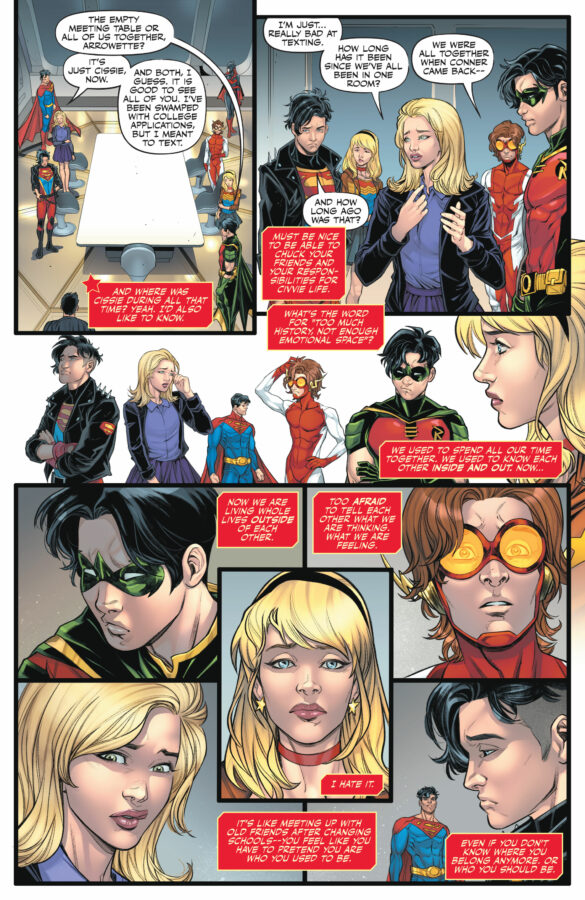 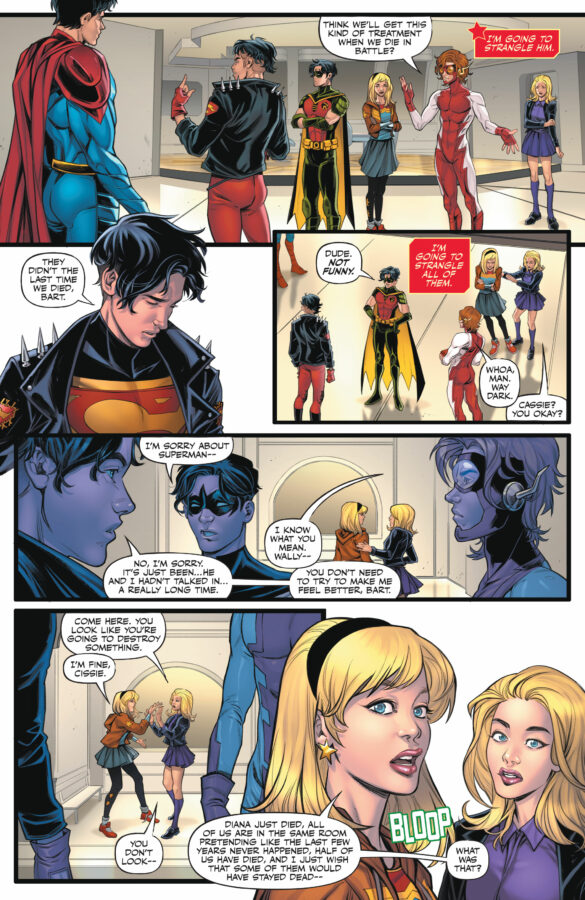 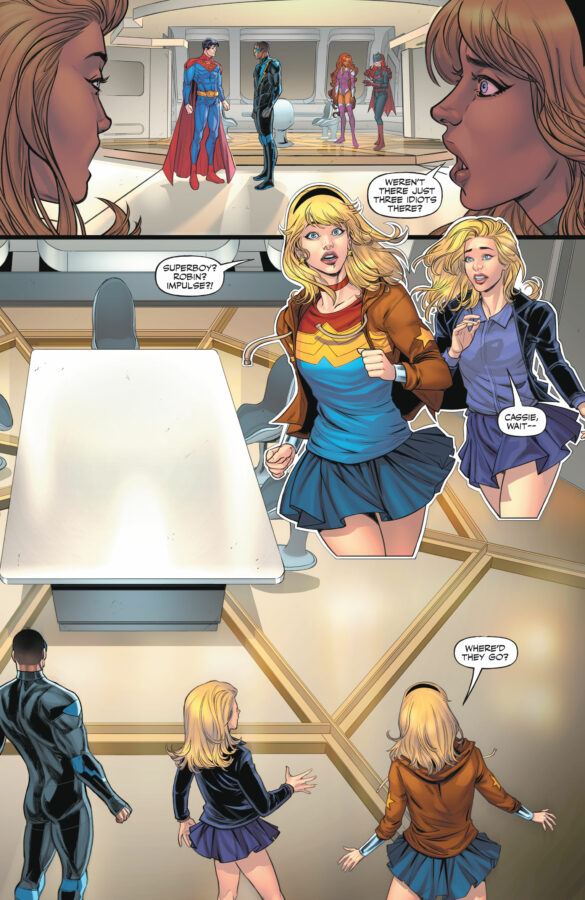 Also, these characters are specifically millennial legacy characters of the 90s. The original Young Justice was a strange title, as Peter David wrote a comic book about 14-year-old boys for 14-year-old boys with a juvenile sense of humor. For example, Young Justice #1 debuted a villain named The Mighty Endowed, real name Nina Dowd (N Dowd… get it?). She was a scientist who uncovered an unknown artifact that transformed her into a Supervillain with big… tracks of land. Seriously, she’s so well-endowed that she can’t stand up.

I mention this because Fitzmartin brings back this villain in Dark Crisis: Young Justice #1. While this makes sense in the context of the issue, you’d think that in a post #MeToo age DC would relegate The Mighty Endowed to the sexist dustbin of history. Alas – here we are. What makes this situation stranger is that a woman wrote this issue. Therefore, a larger question underpins The Mighty Endowed’s return. Why would a well-read, talented writer such as Fitzmartin revive a sexist character from the 90s? I’m guessing her goal is to expose the sexism of the 90s. Where The Mighty Endowed was literally defeated by her own body in the 90s, Fitzmartin has a more feminist-friendly resolution.

Italian artist Laura Braga drew and inked this issue, and she did a pretty good job. This is my first time seeing Braga’s work, and I like her style. Usually, DC goes for a sharp, bombastic house style in the vein of Jim Lee. Braga on the other hand brings a softer aesthetic. Her faces are incredibly emotive, and she does an excellent job of using body language to establish mood.

What I find most amusing about Braga’s pencils for this issue is her depiction of The Mighty Endowed. The running joke in the issue is that the villain’s chest was always covered by smoke. Therefore, the reader relied on innuendo and imagination to construct a mental image of The Mighty Endowed’s full figure. Braga plays with this idea as well, using smoke and odd angles to cover The Mighty Endowed’s mystery. It’s a cute nod to the original Young Justice run. 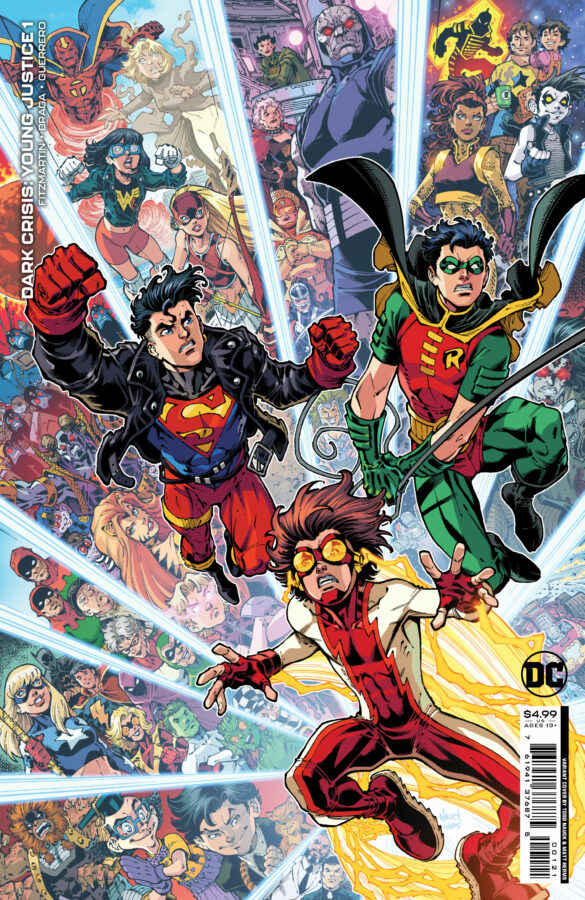 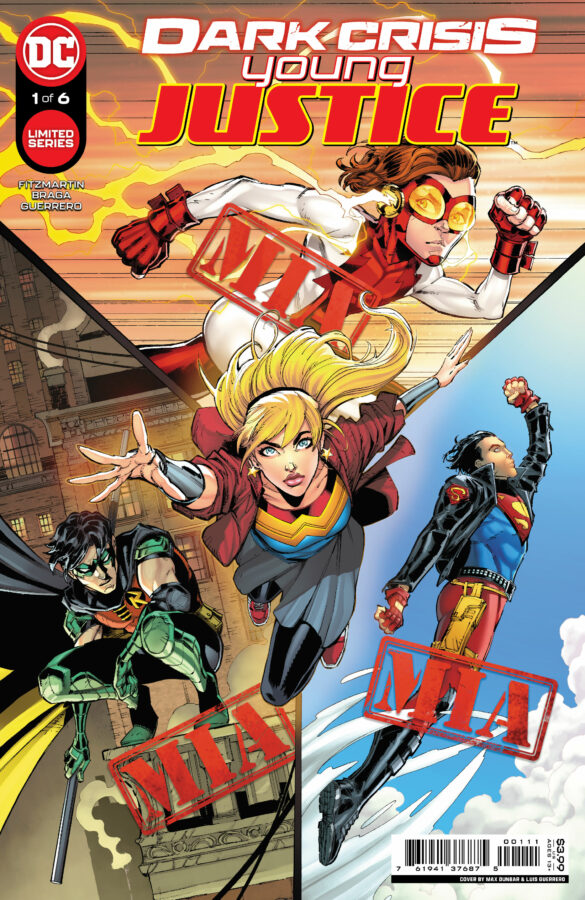 Dark Crisis: Young Justice #1 is by no means perfect. Nevertheless, it’s a lot of fun. Fitzmartin’s script leans into the Dark Crisis theme of legacy, examining a subset of sidekicks that often feel lost in the shuffle between their Gen X and Gen Z counterparts. Braga’s art is fresh and fun, capturing the overly emotive teenage drama of the story. While I was skeptical at first, I found myself excited to blast some MCR and read the next issue.

Final Verdict: AND WE CARRY ON!