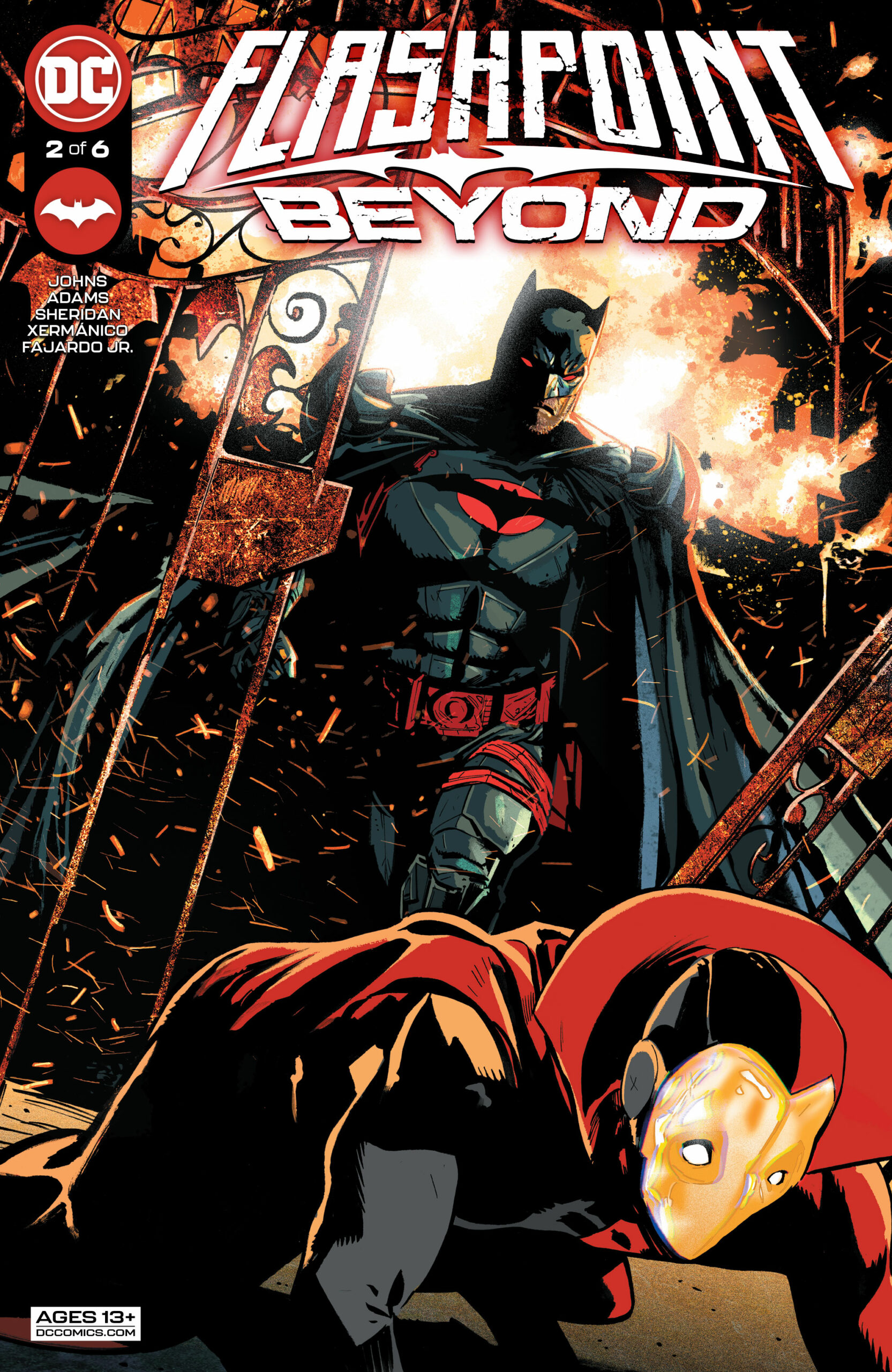 Nihilism abounds in this week’s Flashpoint Beyond #2, as the Thomas Wayne Batman struggles to find meaning in a doomed timeline.

The Flashpoint Batman is trying to figure out how one minute he’s trading blows with Darkseid and the next he’s back in the Flashpoint timeline, one technically shouldn’t exist. Since his arrival home, Thomas has been investigating a string of grizzly murderers committed by a criminal known as the Clockwork Killer in the hopes of restoring the normal DCU timeline.

It turns out that each of the villain’s victims had time-bending powers in the regular DCU timeline. However, Thomas gets a hint when examining the rubble of his recently destroyed Casino and there’s a new patient at Arkham Asylum who’s calling himself Psycho Pirate.

Life is a Meaningless Exercise in Futility

Most incarnations of Batman are riddled with existential angst; however, each one usually finds purpose in avenging the death of his loved ones while dressed as a winged rodent. The Flashpoint Batman is different, as he’s graduated from “I create my own purpose by wearing black spandex and punching criminals” existentialism to “everything is meaningless because my world is a shoddy construct” nihilism. Therefore, unlike other versions of the Dark Knight, this Batman is actively trying to undermine his need to exist.

It’s a fascinating mindset for a character, as it echoes the zeitgeist of our age. We live in an increasingly solipsistic age where there’s constant debate about what is “real”. Ours is the age of social media and “alternative facts”. Thanks to technology, we construct our own individual realities and filter out any information that doesn’t jive with our worldview. We curate until we’re comfortable in our echo chambers; and, on the off chance that we have to deal with uncomfortable voices disrupting our bubbles, we simply lash out. We will type/say/do whatever we want to them because they aren’t real… right? That’s not a real person on the other side of your computer screen, they don’t have feelings and their pain doesn’t matter. Nothing matters.  Flashpoint Batman would agree.

One of my favorite aspects of comics is that they are a visual storytelling medium. The best comics are the ones that utilize the art as a means of reinforcing the theme of the story. Xermanico and Mikel Janin understand this, as the aesthetic for Flashpoint Beyond #2 is a perfect match for the issue’s theme.

For example, at one point in the book, Flashpoint Batman refers to his timeline as an “echo of a lie”. Thomas believes his world lacks substance. It isn’t real. It’s a shadow of the real DCU timeline. How do you capture this idea visually? By covering everything in shadows. The Flashpoint timeline looks dark and menacing.

Accordingly, reading a Flashpoint book is like staring at the shadows on the wall of Plato’s cave. Nothing is as it seems. Everything is a twisted perversion of the real timeline. Even the “history” that underpins the timeline is fake because these are stories that were never written. Readers are only given shadowy outlines of events – nothing concrete.

Flashpoint Beyond #2 is brilliant. Like many great pieces of art, it’s a mirror of sorts. This story shows us the hollow abyss that is 21st-century modernity. Geoff Johns delivers one of his most thoughtful and dense stories to date, as this issue is ultimately about a broken man traversing a broken world. Xermanico and Janin work together seamlessly, illustrating an issue that is as bleak as its script.