We’ve previously seen Batgirl fighting Mr. Freeze but here we get an in-depth rundown on the various features in the game. The extended video preview is narrated by game director Geoff Ellenor and highlights Nightwing and Red Hood’s unique fighting abilities.

Ellenor has also confirmed that Gotham Knights is an open world game, similar to Arkham City or Arkham Knight. Other mechanics similar to the Arkham games include the fighting styles, getting around the streets via Bat-vehicle, and detective mode vision to solve some puzzle-based obstacles.

One advantage that Knights has over the Arkham games is the two-player cooperative feature. The video showed off a fight between Nightwing and a gang of thugs, only for the Red Hood to also join in on the fray.

Other features that the game will have are unique ways for characters to travel great distances. Nightwing will have a rocket-propelled hang-glider and Red Hood will have some mystical-related jump pads from when he was resurrected by the League of Assassins. Each character also has a unique battle system, melee attacks, and stealth take-downs. Nightwing uses his escrima sticks, while Red Hood has dual pistols with non-lethal rounds… honest. 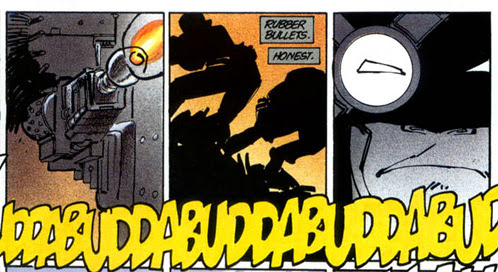 The preview also teases more of the Court of Owls, which seems to have hidden passages and rooms all over Gotham City. The game will pit the heroes against ordinary Court of Owl members, as well as Talon Gladiators, who pose more of a challenge.

This all looks pretty awesome. Can’t wait to see what other antagonists the Court of Owls will provide!

Gotham Knights will hit consoles and PC on October 25 and on PlayStation 5, and Xbox Series X/S.