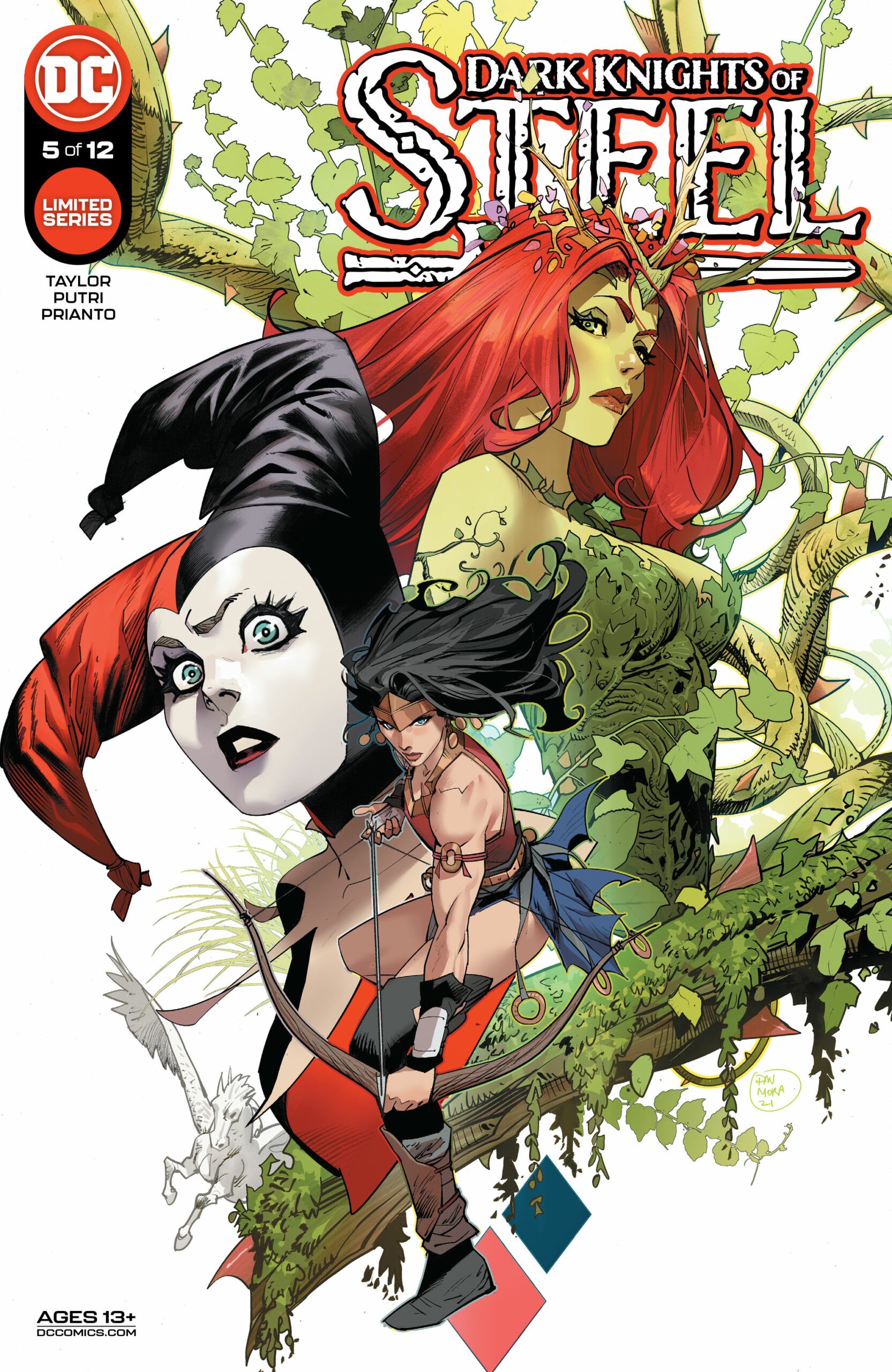 What a heart-thumping issue! Dark Knights of Steel #5 continues to hit us with shocking twists, beautiful art, and jaw-dropping interpretations of our favorite characters.

Tom Taylor really knows how to question Superheroes, and, if altruism even truly exists, because – spoiler alert – if heroes can be corrupt, flawed, and evil, then truly anyone could. This issue is one to keep, as the art is amazing and it leaves you on a cliffhanger that’s exceptionally alluring.

The contrast in the colors of the funeral scene is gorgeous. Zala and Kal’s outfits are the same colors, but Zala stands out in the sun while Kal goes deeper into the shadows. Zala has hints of gold on her skin, possibly pointing towards goodness or possible redemption after her murderous acts, while Kal’s colors darken. The hug between Kal and Zala is ever so touching, but it’s also interesting how being near Kal means staying in the dark and in the shadows.

The next scene follows our beloved jester in this universe. The art in the scene between Poison Ivy and Harley Quinn is gorgeous. It all focuses on so much of their nature, and it’s stunning. The color artist, Arif Prianto, does an impressive job with lighting in this scene and I’ll focus more on that later. Possessive Ivy is also top-tier Ivy; her exchange with Harley is both adorable and threatening, it’s an example of their interaction. I love her devotion to the jester.

As the third queer character enters, Diana flies in to ramp up the action. As all four women meet; Zala, Diana, Ivy, and Harley, their interaction becomes intense. The dialogue is captivating, I was entranced by each of the characters’ needs and agency. It’s rare in a medium where women do most of the talking, and there’s a man standing quietly in the background. This was my favorite scene in the issue.

This is followed by Diana confronting Zala about killing a child, as we saw in issue 2, which she denies, saying that she doesn’t remember doing so. This ignites a suspicion that there may be imposters in this universe, which I hope to goodness, there are.

This issue is certainly another roller coaster of feelings. I won’t spoil anything, but unfortunately, Twitter frequently does (I hope those that post stop doing that and let others enjoy things at their own pace), but the characters introduced at the end of the book blew me away, I know my jaw physically dropped.

The art is phenomenal and so much better than it was in the last issue. The details are so clear, the facial expressions emotion-provoking. The last issue was perhaps trying to give a calmer feel, but this one’s full of beauty and intensity. The action scenes all move so smoothly.

The interaction between Ivy and Harley is gorgeous and so captivating. I would pick up this issue for that beauty alone. The light in the forest also really alluded to its importance. This may be a future battleground.

The issue ends with an image that invokes hope; the reds and yellows, warm tones that mirror our feelings the moment two surprising characters come into the picture, giving us comfort. The Batman’s really going to need it, as he goes through so many emotions in this issue; from fear, to shame, to concern, to pain. It’s also obvious from Alfred’s warm gaze.

Dark Knights of Steel #5 is another winner, a book filled with great dialogue and heart-wrenching moments. I’m loving this medieval universe and the new versions of our favorite heroes. I have a major suspicion that there are imposters in this universe trying to hurt the name of the Els and, in addition, There’s a very suspicious kryptonite moment. Tom Taylor, please continue to pull on our heartstrings.