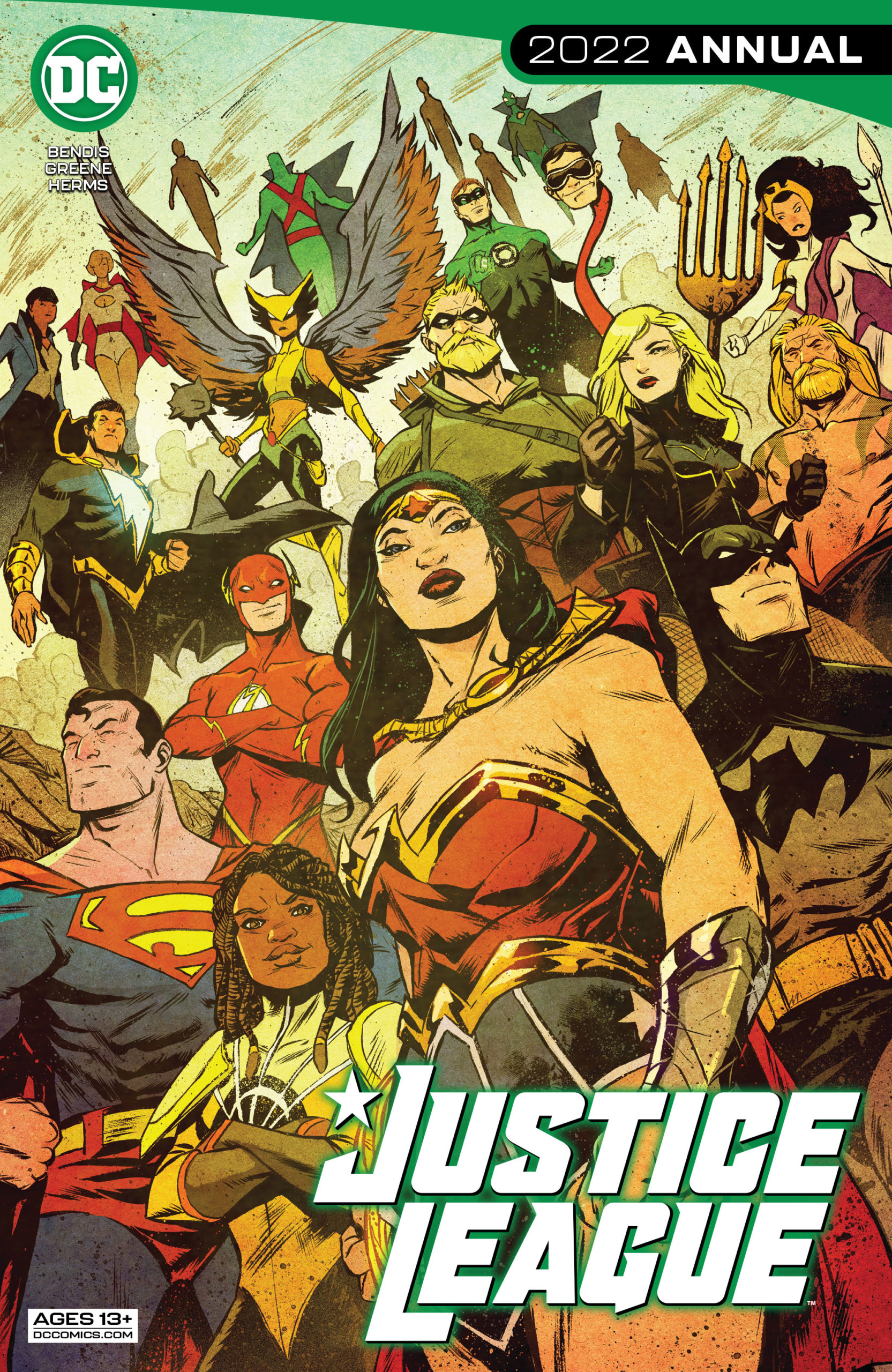 Reality goes wibbly-wobbly, timey-wimey, as the League faces a threat that tears at the fabric of the space-time continuum in this week’s Justice League 2022 Annual.

Wonder Woman has returned from the great beyond, and the League is stoked. In fact, it’s party time for the world’s greatest heroes, as they celebrate Diana’s miraculous return after the events of Death Metal #7. However, it wouldn’t be a Justice League party if it wasn’t interrupted by a random interdimensional party crasher. This issue’s culprit is none other than O.M.A.C. 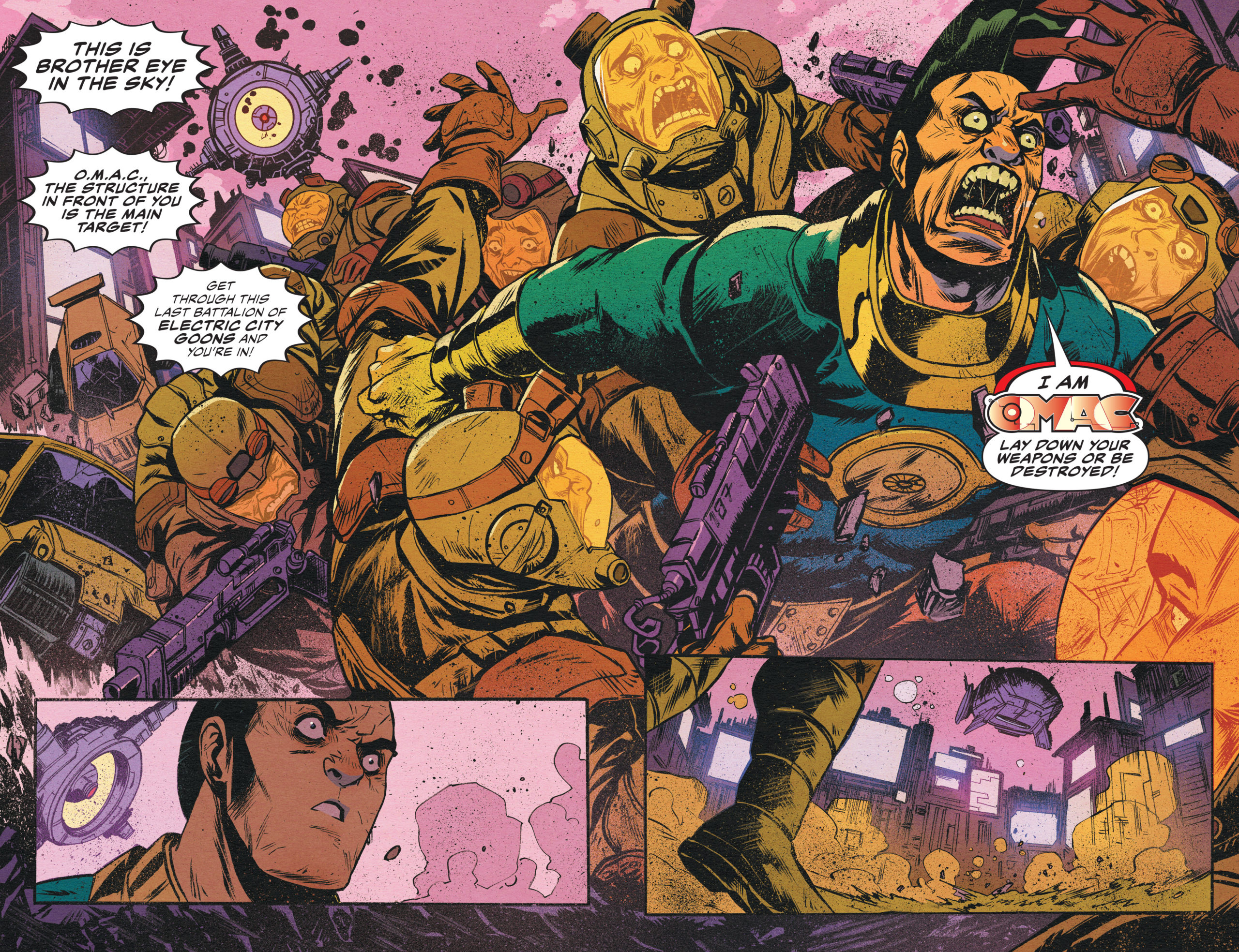 Upon arrival, the One Man Army Corps collapses. Having deduced that O.M.A.C is from the future while running tests on the android, the League notices that there were other bursts of chronal energy around the world that corresponded with the arrival of O.M.A.C. Therefore, the League splits into teams to investigate these chronal hotspots.

In typical Bendis fashion, the issue reintroduces an old-school DC villain named Epoch, The Lord of Time, which frankly sounds like a direct ripoff of Doctor Who’s Time Lords. Having first appeared in Justice League of America #10 back in 1962, DC’s Lord of Time manages to skirt copyright issues since Doctor Who didn’t hit the scene since 1963… but I digress.

Usually, I’m game for a good time travel storyline, as they often find interesting ways to manipulate storytelling conventions. However, the Justice League 2022 Annual left me scratching my head. Now – I like to think that I’m a relatively intelligent individual, plus I’ve been reading comics for over a decade and a half. If I had to reread the issue in order to understand what’s happened, then the issue is likely overly convoluted. Part of the problem is that this issue is a setup for a future storyline, and now it’s been confirmed that Justice League will be coming to an end at issue #75, Bendis is out of time to seed this storyline elsewhere. Therefore, he’s crammed everything into a giant, convoluted Annual that really should have been at least two full-length issues.

Greene is in the House

The award-winning artist Sanford Greene has art credits for this issue, and the dude knocks it out of the park. In all seriousness, this might be one of the most beautiful issues of Justice League I’ve seen since I started reviewing the title in 2018. Green’s pencils are rich in detail and ooze style. I love how emotive his faces are. He never leaves the reader guessing how a character is feeling in any given panel. Plus… Holy moly – Greene’s action sequences are a wonder to behold, as they’re absolutely electrifying to read. Finally, I’d like to point out how creative his paneling is for this issue. I’m thinking of one particular page that shows a single character’s face divided into four frames. This was one time where the art provided a certain amount of narrative clarity, driving home Bendis’ point visually. It was a nice creative touch that really aided the overall story of the issue.

The Justice League 2022 Annual is everything I’ve come to expect from Bendis’ Justice League: a mixed bag of meh. Bendis has some interesting ideas floating around in this issue; however, they get lost in an overly convoluted script. Greene’s artwork is a strong redeeming factor for this otherwise mediocre book, as his work is undeniably stunning.

The issue definitely gets a bump in its score for Greene’s art alone. Nevertheless, I can’t say that the book instilled within me a burning desire for Bendis’ upcoming Justice League vs. The Legion of Superheroes. So it goes.

Final Verdict: Be prepared to scratch your head and reread the issue.